Russian TV presenter Andrey Norkin claimed that the mass grave reported by President Zelensky in the liberated Ukrainian city of Izyum is a “provocation” from Kyiv which is being used by Ukraine to “spoil the impression” of major international events such as the summit held in Uzbekistan between Vladimir Putin and Chinese President Xi Jinping. Showing pictures of Ukrainian officials investigating the mass grave in Izyum in the background, another presenter Ivan Trushkin accused President Zelensky of “stirring up a new Bucha” and argued the bodies discovered in the mass grave did not belong to civilians but rather to Ukrainian soldiers “who were abandoned by their own”.

Speaking on NTV channel, Andrey Norkin said: “We can’t rule out that the new provocations being prepared by Ukraine – our experts among others have warned about this – are all connected to attempts to spoil the impression of the major international events which are currently taking place.

“First and foremost the Shanghai Corporation Organisation summit of course which is now taking place in Samarkand.”

The second host, Ivan Trushkin, also added: “As our guests predicted yesterday, the Ukrainian president is now trying to stir up a new Bucha by talking about atrocities by the Russian Army – alleged atrocities obviously, this time in the city of Izyum.

Referring to President Zelensky, he continued: “Zelensky has recorded a special video address on the subject. 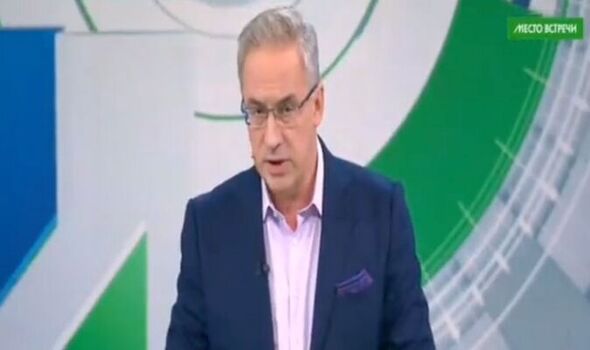 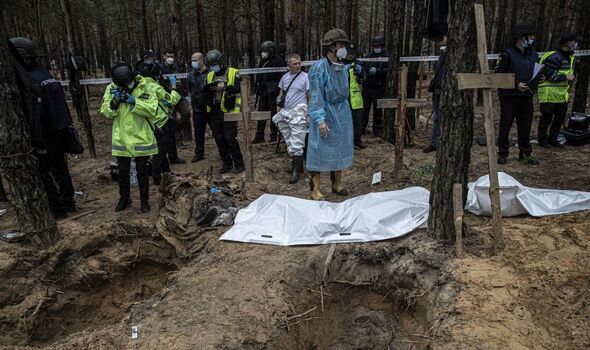 “He said that foreign journalists will be brought to the city for them to publish footage of the mass graves.

“According to Kyiv, there is evidence of certain horrific acts by our Armed Forces.”

Showing images of Ukrainian investigators in the mass grave site in the background, he argued: “Kyiv claims that there are at least 400 people in these has graves, but in the photos of the graves which you’re seeing, you can see Ukrainian Armed Forces, 17 men, and other inspections on the crosses.”

He concluded: “That’s to say, they’re clearly not civilians but a grave of Ukrainian soldiers who were abandoned by their own.

“Kyiv has already promised that each body will be exhumed but apparently they will be shown to the Western press and Western officials will be taken there like they were taken to Bucha”.

Izyum city, located in east Ukraine, had been under Russian occupation for months but was recaptured this week by the Ukrainian forces amid their counter-offensive to retake control of Russian-controlled areas.

Around 440 graves have been found in the city after it was liberated from the Russian troops this week.

As the mass graves were uncovered, Chief Police Investigator for the Kharkiv region Serhii Bolvinov told Sky News: “I can say that there is one of the biggest burials in one liberated city, which contains more than 440 graves. Some 440 bodies were buried in one place. 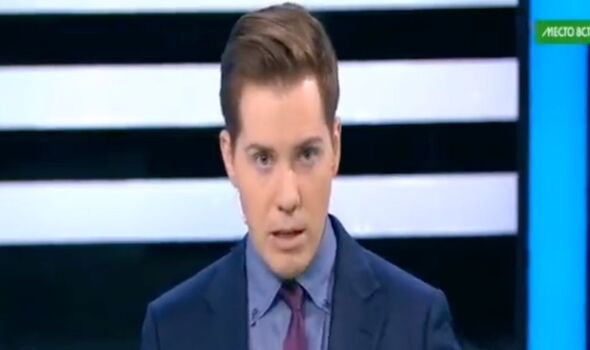 “Also we have information that a lot of bodies have not been not identified yet. So the reasons of death will be established during the investigations”.

President Zelensky has confirmed the discovery of a “mass brutal site” in Izyum city following its recapture this week.

In his nighty address to the nation, he added: “We want the world to know what is really happening and what the Russian occupation has led to.

“Russia leaves death everywhere. It must be held accountable for that. The world must hold Russia to real account for this war”.