The victim was immediately transported to Natividad Medical Center, a trauma centre located approximately 23 miles from the beach where the incident took place. The Pacific Grove Police Department confirmed that a male sustained significant injuries from a confirmed shark bite at Lovers Point Beach in California.

The attack took place at around 11 am.

The watersport the male was involved in has not yet been confirmed by police.

According to KSBW, Pacific Grove city councilman Joe Amelia said a surfer was injured while in the water and suffered major injuries to the stomach and leg.

City of Pacific Grove Councilmember Jenny McAdams wrote to Facebook: “After the attack, the shark was seen again in the area. 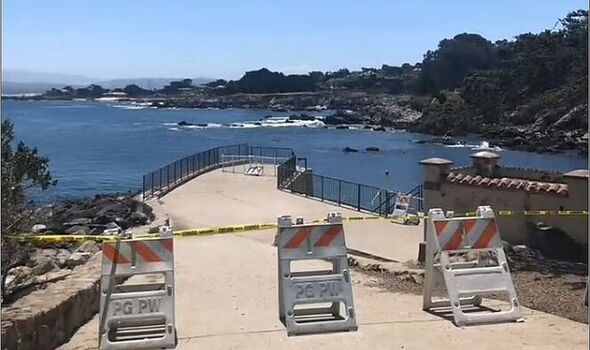 “The beach has been closed, with everyone ordered out of the water.”

An investigation is now underway as Lovers Point Beach has been closed until further notice, police said.

The Monterey Herald reports: “All beaches in Pacific Grove will be closed for at least 48 hours following a shark attack at Lovers Point this morning.”

Photos from the scene showed caution tape alongside orange and white barriers blocking the entrance to the beach.

Rhonda Navarrol, who witnessed the attack, told CBS affiliate KION-TV that the shark was visible from above the water but that she couldn’t recognize which type it was.

A press release will take place later as more updates are expected.

As of June 22, there have been 10 shark attack bites in the US this year, according to Tracking Sharks.

DON’T MISS:
Strikes slammed as ‘detriment’ to other workers amid Merseyrail deal
Monkeypox outbreak onboard BA flight as crew forced to isolate
Queen ditches walking stick as she is handed Jubilee honour

Nearly all of them occurred in Florida, except one, which took place in California.