Interactive weather maps show a first glimmer of snow may be set to hit the UK in mere days – with a large area of Scotland highlighted to potentially get a light dusting of 3cm. The WX Charts model shows a large part of western and central Scotland shaded purple – which according to its key is indicative of snow, albeit a small amount. But when put to weather expert and senior meteorologist at British Weather Services, Jim Dale, he exclusively told Express.co.uk what it means and how likely it is to happen. While his scepticism was clear, he did not rule it out.

The map shows wintry showers moving south west across the North Sea from Norway late on Wednesday, October 19, forming into what looks to be sleet or snow over central Scotland, with a large part falling on the Scottish Highlands.

As the showers, which will likely include rain, begins to clear, it will leave a glittery and light snowy scene in the dead of night. Due to the timing of this weather event being over a fortnight, the map doesn’t update beyond this point as yet – but will do as time moves on.

Temperature gauges for midnight between October 19 and 20 does show the Scottish Highland’s mercury plummeting to -2C, an indicator of extremely cold conditions – which is also to be expected, Mr Dale said.

He told Express.co.uk what he thought of the prediction, and said: “Let’s make it clear – that’s not a big event. I think the timing is overnight and into the next day.” 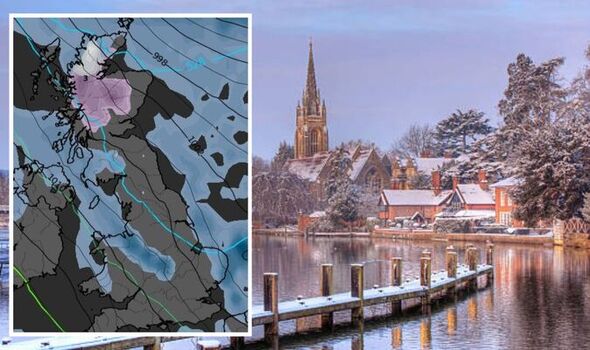 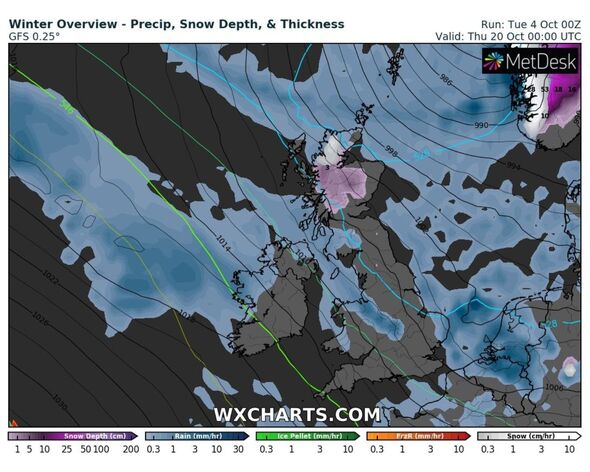 “It will be colder, especially on the mountains, it will be about 2C to 3C which is enough for sleety stuff and maybe for a bit of snow or sleet. Some of that will be sleet I think, it is an assumed chart and there is a chance of some wintery stuff coming behind this front, but it is more for the mountains.

“It’s a changeable zone, but it is more rain than it will be snow, and it won’t be anything that’s going to be notable or lasting – but it is a first sign of the seasons to come.”

While Mr Dale cites high ground as being the places to get the dusting, the map’s most up-to-date run shows this sprinkle of sleet or snow may still reach residential areas.

Despite the first dash of snow not being completely ruled out, another independent forecaster has tweeted that a cold snap may be on the horizon over the next fortnight. 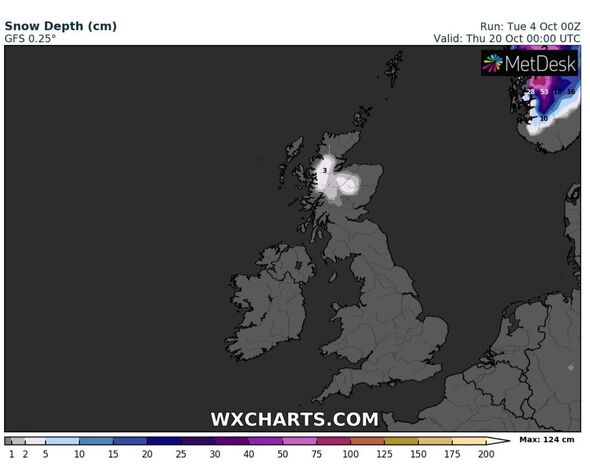 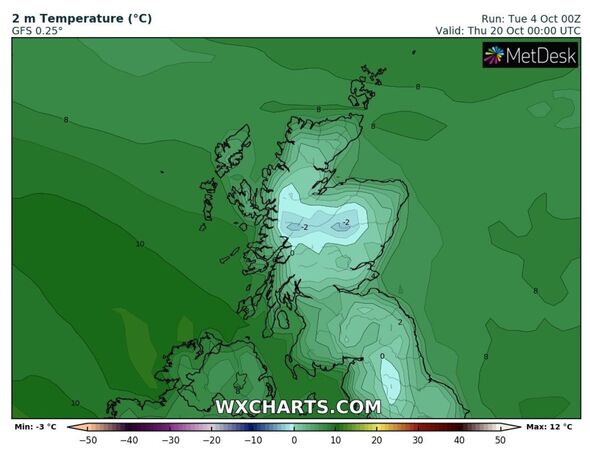 Brian Gaze, founder of The Weather Outlook, showed a graph which he said was indicative of a dip in the mercury. He said: “GEFS pointing towards colder and wetter conditions later this month. Worth keeping an eye on how it develops.”

While no forecaster is throwing their weight behind snow predictions, there are some suggestions of a more unsettled period leading up to October 19 and 20.

The Met Office’s long range forecast reads: “This period is likely to be characterised by unsettled weather with sunny spells and showers or longer periods of rain for most areas. The heaviest and most frequent rain is expected in the west and northwest, while southern areas may remain drier on average.

“Confidence remains low, with the possibility of more settled conditions building across the UK at some point. Breezy conditions are expected throughout, with coastal gales possible, and the strongest winds are likely to be experienced in the north.”

DON’T MISS:
Tory rebels have taste for blood but axing Truss would be suicidal [ANALYSIS]
Cabinet lashes out at ‘disloyal’ Michael Gove for rebellion threat [REACTION]
Kwarteng comes out fighting with tax cuts plan and bonfire of EU rules [IN DEPTH]

Western Scotland, at the moment, is wedged between two yellow weather warnings – one which expired this morning was for rain, and the second which is in place from midnight until 10am tomorrow.

Mr Dale told Express.co.uk: “At the moment the main story for Scotland is the rain, which is give or take 65mm and it might even get to 80mm.

“It is a very active front with mild air going, up, up, up and that’s the reason why there is a lot – it’s the mild air and the western isles is the bullseye.”