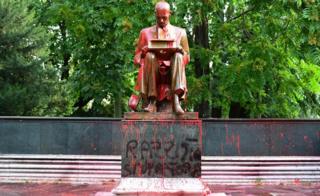 The statue of a famous Italian journalist who defended colonialism, Indro Montanelli, has been daubed with red paint and defaced with the words “racist, rapist” in Milan.

Anti-racism protesters – a group called Retestudentimilano – claimed the attack and posted a video on Instagram.

They said the statue must be removed from the Milan park named after him.

Montanelli, who died in 2001, admitted having married an Eritrean girl aged 12, during army service in the 1930s.

It is reported to be the first such attack on a statue in Italy in the current anti-racism demonstrations in the US and Europe. Sparked by the death of George Floyd in US police custody, the protests have targeted statues seen as symbols of colonialism and slavery.

Retestudentimilano labelled Montanelli “a colonialist who made slavery an important part of his political activity” and said he “cannot and should not be celebrated in the public square”. 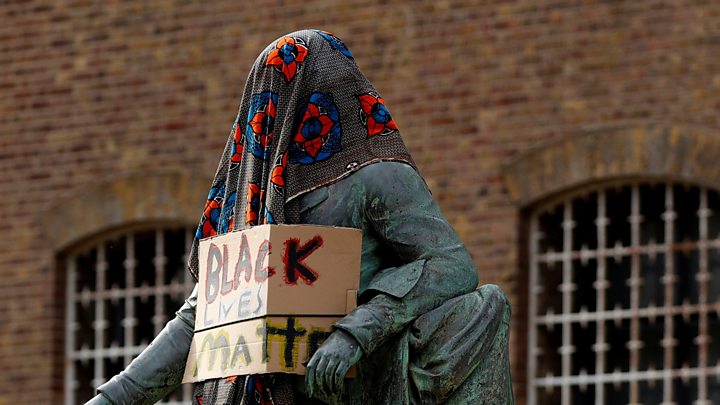 His career in journalism began in the fascist Italy of far-right dictator Benito Mussolini in the 1930s, writing for the fascist newspaper Il Selvaggio (The Savage).

But the accessible style that distinguished him in Italy was something he perfected as a reporter for United Press in New York.

In 1935 Mussolini sent a huge army into Abyssinia – today’s Ethiopia – from the Italian colonies of Eritrea and Somaliland. Montanelli enthusiastically signed up for the cause, serving in the Italian colonial army, though he later expressed some disillusionment with Mussolini.

Montanelli later reported from the Spanish Civil War, as a correspondent on the fascist side, and from various front lines during World War Two.

In later life Montanelli won international recognition and in 2012 he was listed among the International Press Institute World Press Freedom Heroes.

But his association with fascism continued to haunt him.

For a long time he denied that Italian forces had used poison gas against the Ethiopians in the 1935-1936 invasion.

“They said that the gases were used in the Amba Aradam offensive. I was there. I didn’t notice. A battalion companion of mine, a certain Nudi… told me he had smelled onions – the typical smell of mustard gas. But I don’t think that weapon was on the agenda. It was a war in which gas was useless. There were no enemy concentrations in confined areas,” he said.

However, in 1996 Montanelli admitted that mustard gas had been used, when a leading Italian historian, Angelo Del Boca, confronted him with documentary evidence.

He worked for many years at the daily Corriere della Sera and founded the right-wing daily Il Giornale in 1973. But when billionaire Silvio Berlusconi took over Il Giornale and went into politics Montanelli left.

In 1977 a far-left Red Brigades cell shot him in the legs near the offices of Il Giornale, but his injuries were not life-threatening.