Seafarers around the world caught up in what UN warns is a growing humanitarian crisis blamed for several suicides. 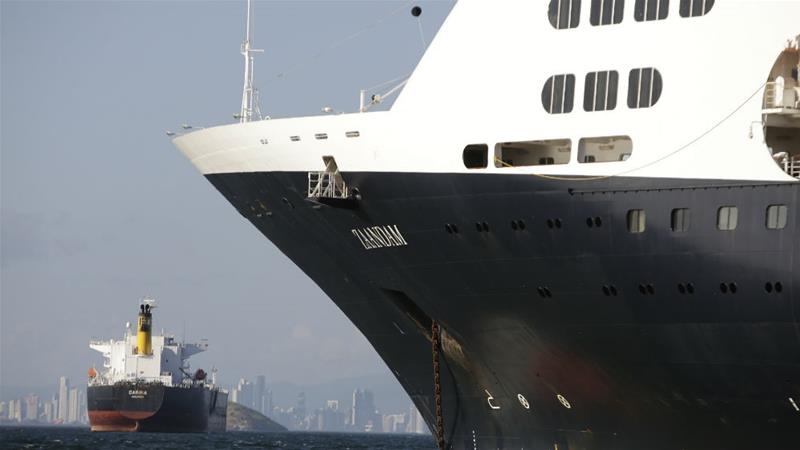 Indian ship worker Tejasvi Duseja is desperate to go home after months stranded offshore by coronavirus border closures and lockdowns that have left more than 200,000 seafarers in limbo.

From engineers on cargo ships to waiters on luxury cruise liners, ocean-based workers around the world have been caught up in what the United Nations warns is a growing humanitarian crisis that has been blamed for several suicides.

Many have been trapped on vessels for months after their tours were supposed to end as travel restrictions disrupted normal crew rotations.

“Mentally, I am just done with it … but I’m still holding up because I have no other option,” Duseja, 27, told AFP news agency via WhatsApp and Facebook Messenger in late June as the Indian-owned cargo vessel he works on floated near Malaysia.

Duseja, one of roughly 30,000 Indian workers unable to leave their ships, had extended his seven-month contract a few months before the pandemic struck.

Seafarers typically work for six to eight months at a stretch before disembarking and flying back to their home countries, with new crews taking their place.

But as the deadly virus whipped around the world and paralysed international travel, that was suddenly impossible.

Underscoring the growing urgency of the situation, more than a dozen countries at a United Kingdom-hosted International Maritime Summit this month pledged to recognise seafarers as “key workers” to help them get home.

‘You worry if you’ll ever come back home’

The 31-year-old had barely heard of COVID-19 when he boarded the Carnival Ecstasy in Florida in late January.

Soon, a number of Carnival-owned cruise ships were stricken with severe outbreaks – including the Diamond Princess in Japan.

After the Ecstasy passengers disembarked in Jacksonville on March 14, Capajo and his colleagues were forced to stay on board for the next seven weeks.

Finally, on May 2, the ship sailed to the Bahamas where Capajo says he and 1,200 crew members were transferred to another boat that took them to Jakarta before arriving in Manila Bay on June 29.

He wanted to “kiss the ground” when he came ashore nearly two weeks later after finishing quarantine.

“This could probably be the hardest part of my experience as a seaman because you are not sure what will happen every day,” Capajo told AFP via Facebook Messenger last week, as he endured a second quarantine near his hometown in the central Philippines.

“You worry if you’ll ever come back home, how long will you be stuck on the ship. It’s difficult. It’s really sad.”

Filipinos account for about a quarter of the world’s seafarers. About 80,000 of them are stranded because of the pandemic, according to Philippine authorities.

The ordeal has taken a toll on the mental health of many seafarers, with reports of some taking their own lives.

In one case, a Filipino worker died of “apparent self-harm” on the cruise ship Scarlet Lady as it anchored off Florida in May, according to the US Coast Guard.

Shipping industry groups have expressed their concerns about “suicide and self-harm” among workers in a joint letter to UN Secretary-General Antonio Guterres, who said last month some seafarers have been “marooned at sea for 15 months”.

An International Labour Organization (ILO) convention widely known as the Seafarers’ Bill of Rights limits a worker’s single tour of duty to less than 12 months.

The strain is also being felt by families waiting at home.

Priyamvada Basanth said she did not know when she would see her husband who has been at sea for eight months on a ship owned by a Hong Kong company.

“The government is not even doing anything,” said Basanth, from the southern Indian port city of Kochi. “I just want him to come home.”

Lala Tolentino, who runs the Philippine office for a UK-based seafarers support group, said they had been swamped by “hundreds” of pleas for help from stranded workers since March.

“They want to know what will happen to them, where they are going. Will they be able to get off their ships,” she told AFP.

Many of those stuck on board completed their tours more than four months ago and were exhausted, the ILO said last month.

For Duseja, who comes from the northern Indian city of Dehradun at the foothills of the Himalayas, the end of his ordeal is in sight.

“I’m still on the ship,” he told AFP in a WhatsApp message last week.

“But mentally, I am feeling slightly better because I’ve been told that I’m finally getting off the ship mid-August.”