A Tyrannosaurus rex skeleton called Stan has sold for £24.5m at auction, breaking an all-time record.

Named after Stan Sacrison, the amateur palaeontologist who discovered it in South Dakota in 1987, Stan is 40ft long and 13ft high.

It sold for $31.8m (£24.5m) at Christie’s auction house in New York on Tuesday, making it the most expensive dinosaur fossil ever to be sold.

The anonymous buyer spared no expense to get their offer accepted over the phone – after 20 minutes of bidding. 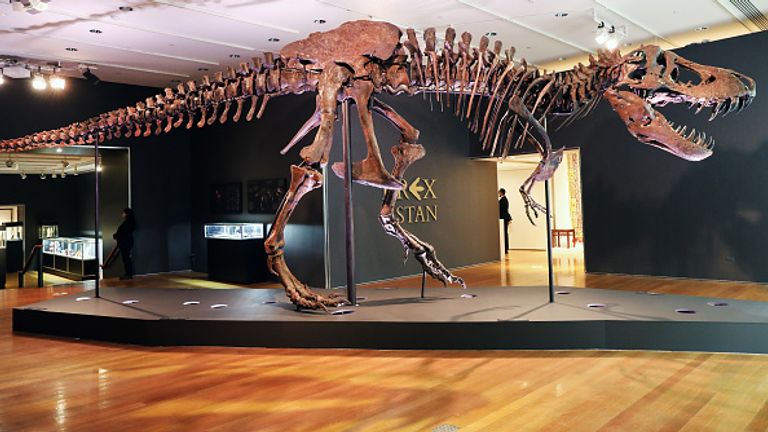 The 67-million-year-old structure is made up of 188 bones and peaked scientists’ interest after they spotted two fused vertebrae in the neck – which implies the dinosaur survived a broken neck during its lifetime.

Its teeth are over 11 inches long

The impressive skeleton has been studied by experts at the Black Hills Institute of Geological Research in Hill City, South Dakota for the past 20 years.

The last complete T-Rex skeleton to be sold at auction was in 1992.

It was bought by the Field Museum of Natural History in Chicago for $8.36m (£6.45m) and was nicknamed Sue.