Home » World News » Taliban attacks in Afghanistan must be reduced: US general 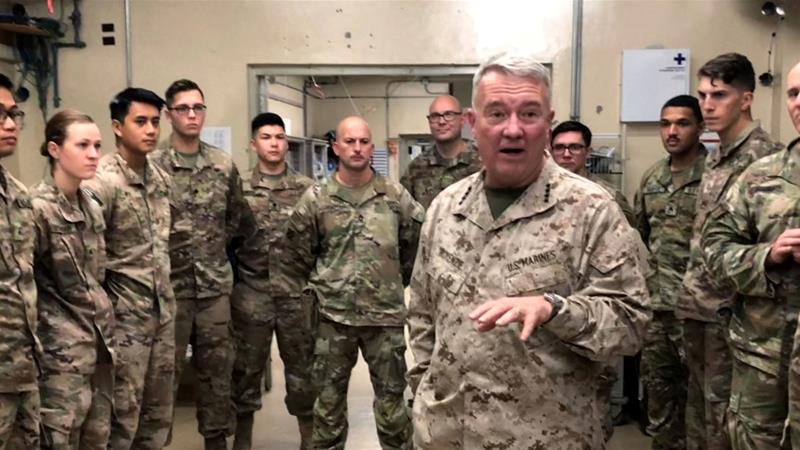 A top United States general said on Thursday that the Taliban had to significantly reduce the number of attacks it is carrying out, after an accord it signed with the US earlier this month.

“I would not consider what the Taliban is doing as consistent with any path to going forward to come to a final end state agreement with the current government of Afghanistan,” US Marine General Kenneth McKenzie, the head of the military’s Central Command, said during a Senate hearing.

“Those attacks are going to have to come off considerably … we need to get way below where we are now,” he said.

The Afghan government said on Wednesday it would free 1,500 Taliban prisoners, while delaying the release of another 3,500 that the Taliban say must be set free for talks to begin under an agreement reached with the US.

The Taliban promised to open talks with the Afghan government as part of the accord reached with the US last month to end 18 years of US involvement in war in Afghanistan.

The Taliban said the agreement requires the government to release 5,000 prisoners before talks begin. The government says the talks must begin and violence subside before it will free them all.

Sources have told Reuters news agency the dispute arises in part because of different wording about the prisoner release in separate agreements the US reached with the Taliban and the Afghan government.

President Ashraf Ghani has issued a decree ordering the release of an initial 1,500 prisoners, with the other 3,500 to be set free as conditions are met, Ghani’s spokesman Sediq Sediqqi said.

“The Taliban want all 5,000 prisoners released at once, which is impossible,” Sediqqi told journalists at a news conference. The first prisoners would be freed on March 14, he said.

Suhail Shaheen, a spokesman for the Taliban based in Doha, told Reuters news agency that the group had never agreed that there would be conditions attached to the release of the 5,000 prisoners.

Despite the accord between the US and the Taliban, fighting has continued in various parts of the country.

“The Taliban will be responsible, not the Afghan government, if this process fails,” Sediqqi said.

Zalmay Khalilzad, the US special envoy who was the key negotiator in talks with the Taliban, has urged both sides to sit down for talks.

Taliban leaders told Reuters that their leadership council has also rejected an Afghan government demand that they give written guarantees that the released prisoners will not take part in fighting the Afghan government in the future.

Meanwhile, the formation of a negotiating team that is to participate in the talks with the Taliban as part of the intra-Afghan dialogue has been delayed due to continuing political consultations, Sediqqi said.

The composition of the team has been a bone of contention between the Afghan president and his main rival Abdullah Abdullah, who has refused to recognise Ghani’s re-election in last year’s presidential polls.

Abdullah, the runner-up who disputed the outcome in each of Afghanistan’s last three presidential elections, has served as chief executive of a unity government since 2014. He held a ceremony this week to declare himself president on the same day Ghani was sworn in for a second term elsewhere in the capital.

“President Ghani has told us he is consulting with Dr Abdullah and other Afghan leaders and will announce an inclusive team in the coming few days,” the US Department of State said in a statement on Tuesday.

On Wednesday, Ghani’s spokesman announced that a decree had been issued to dissolve Abdullah’s chief executive post. Abdullah issued his own statement saying Ghani was no longer president and his decrees were not valid.