NEW DELHI (Reuters) – The heat was already suffocating when Mohammad Aamir Khan woke up in his tiny, windowless room with only a sheer curtain for a door. He offered a brief prayer to a picture hanging above the bed of the Kaaba, the holiest site in Islam, and headed down the narrow stairs. 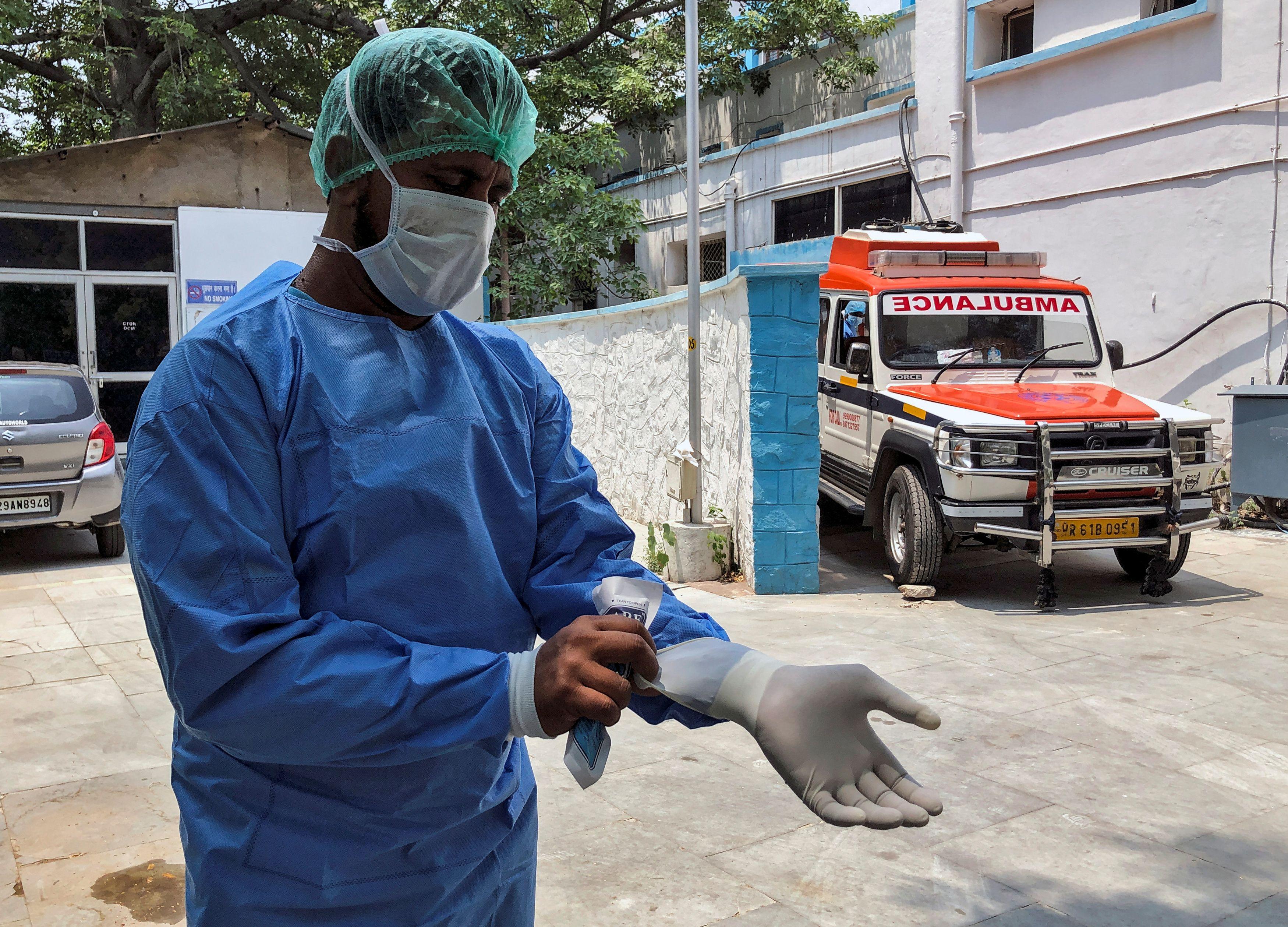 It was time to ferry the dead.

Before the novel coronavirus brought its pandemic to New Delhi, Aamir was one of tens of thousands of people making a living in the Indian capital as a taxi driver.

But that work dried up during the nearly three-month lockdown to prevent the spread of the virus. With cases rising in India even before the government lifted the lockdown last week, a friend suggested perhaps the only business now booming in the country – driving a private ambulance.

Reporting on his first day, the 38-year-old said, he hadn’t even realized he would be transporting coronavirus patients until he was handed a set of overalls.

It wasn’t long before his ambulance became a hearse. Now his days are spent transporting corpses from the hospital to cremation pyres and cemeteries, sometimes stacked on top of each other six at a time, their names written in permanent marker on their burial shrouds.

Sometimes he is alone in his ambulance and must rely on the relatives of the dead to help him lift the body from the back of the vehicle. Sometimes he has to lift them himself.

“It was strange to me, to be carrying a body instead of a patient,” he said of the first time he did it. “But over time, I got used to it.”

As the job becomes more familiar, Aamir wrestles with how much protective equipment to wear. He could wear a hazmat-like suit, but that isn’t very practical in New Delhi’s ferocious heat.

“We will faint in half an hour if we wear the kit and work,” he said. He and his fellow drivers are much more comfortable wearing a thin hospital gown. But there might be a price for their comfort: “We are always worried that we might catch the infection.”

Government-run ambulances are scarce in India. Most people resort to calling private ambulances, some little more than converted vans with mobile numbers written on the side, in the hope a passerby will note it down and call if they fall sick.

Unlike in many other countries badly hit by the virus, ambulance drivers and other vital health workers in India are poorly paid, have minimum training, no health insurance and long working hours. Cases in India are surging, with nearly 323,000 infected, four times that of China’s official infections. The peak is still weeks, if not months, away, experts say, even as the government eased almost all curbs on movement on June 8.

India’s federal government, led by Prime Minister Narendra Modi, maintains it has the virus under control. The number of deaths in the country, at 9,500, is so far limited compared to countries with a similar number of cases.

Like his father, Aamir trained as a stonemason, but found it too difficult to earn a living. He later found work as a taxi driver for a string of companies, including Ola and Uber.

Sometimes, he was able to save as much as 1,000 Indian rupees (about $13) per day after expenses – enough for him and his wife, Rubi, to enroll their 7-year-old daughter, Hamda, at a local private school.

But after the lockdown began, the owner of the taxi he drove said he was no longer required because of slack demand.

Aamir has kept his ambulance work a secret from his neighbors in Mandawali, a low-income, illegally built colony in the east of the capital that was only recognized by the Delhi government in 2012.

He worries what they’ll think if they find out. Doctors, nurses and other medical staff treating patients across India say they have been attacked and spat at, with some ostracized by friends and relatives as the virus spread across the country.

“They still think I am unemployed,” said Aamir, who doesn’t even have the comfort of his wife and child during this time of global troubles. They left to visit the family’s ancestral village days before the lockdown and haven’t been able to return.

Aamir’s pay, 17,000 Indian rupees (about $220) per month, is better than being unemployed, but it doesn’t compensate for the risks, he said.

Aamir’s days are a circuit of hospital mortuary, cemetery and crematorium. Interspersed are long waits in the heat, drinking tea and smoking cigarettes with other drivers and their mortuary assistants.

His first stop is usually Jadeed Qabristan, the main Muslim burial ground for Delhi’s old walled city. He refers to Mohammad Shameem, the head gravedigger there, as “Shameem bhai,” or brother, a sign of friendship in India.

Over the last month, a patch of waste ground outside the main cemetery has filled with the bodies of coronavirus victims. Broken bits of slate and twigs mark the graves. Others are unmarked altogether.

Aamir quietly instructed relatives on how to lift the bodies as they were placed into coffins and then into double-depth graves dug with a yellow excavator.

Late one afternoon after returning to the mortuary from Jadeed Qabristan, Aamir was called for his second trip of the day: to Nigambodh Ghat, one of the main cremation grounds for Hindus in the city.

His ambulance is supposed to carry a maximum of two bodies, but on this day, there were six. He carried a handwritten list of their names on a little scrap of paper.

Half of the electric ovens were broken, and men in vests heaved firewood up to the open pits where the bodies of coronavirus victims are now cremated.

Most days at Nigambodh, there’s a backlog of ambulances due to a lack of crematorium staff. As Aamir squatted by a replacement chimney for one of the ovens one day, an argument broke out between workers and grieving relatives.

The air shimmered with heat from the pyres and the Delhi summer, where temperatures had already reached 47 degrees Celsius (116.6 Fahrenheit).

The smoke began to sting Aamir’s eyes, and he reached for a pair of goggles.

Crematorium workers, one wearing flip-flips, opened the door to the ambulance. One of the men rifled through the bodies, looking for names written onto the shrouds.

The first was that of Satinder Kumar Singh, a 50-year-old bank employee. He was admitted to the hospital on June 9 and died two hours later, said his 16-year-old son, Amrit.

“There is no dignity. It is like a dustbin,” said Devinder Sharma, a neighbor who had come to help Singh’s sons.

Sharma gestured to the open doors of the ambulance in disgust. “After seeing this, I don’t believe in humanity anymore.”

Crematorium workers went to lift the second body, a heavyset man. He was wedged tight against the others, and as the workers strained under the weight, he tumbled to the ground, ripping the shroud as he fell.

After they placed him onto the pyre, a relative stepped up to try to preserve the man’s dignity. The mourner wasn’t wearing any protective equipment, and a crematorium employee barked at him to step back. 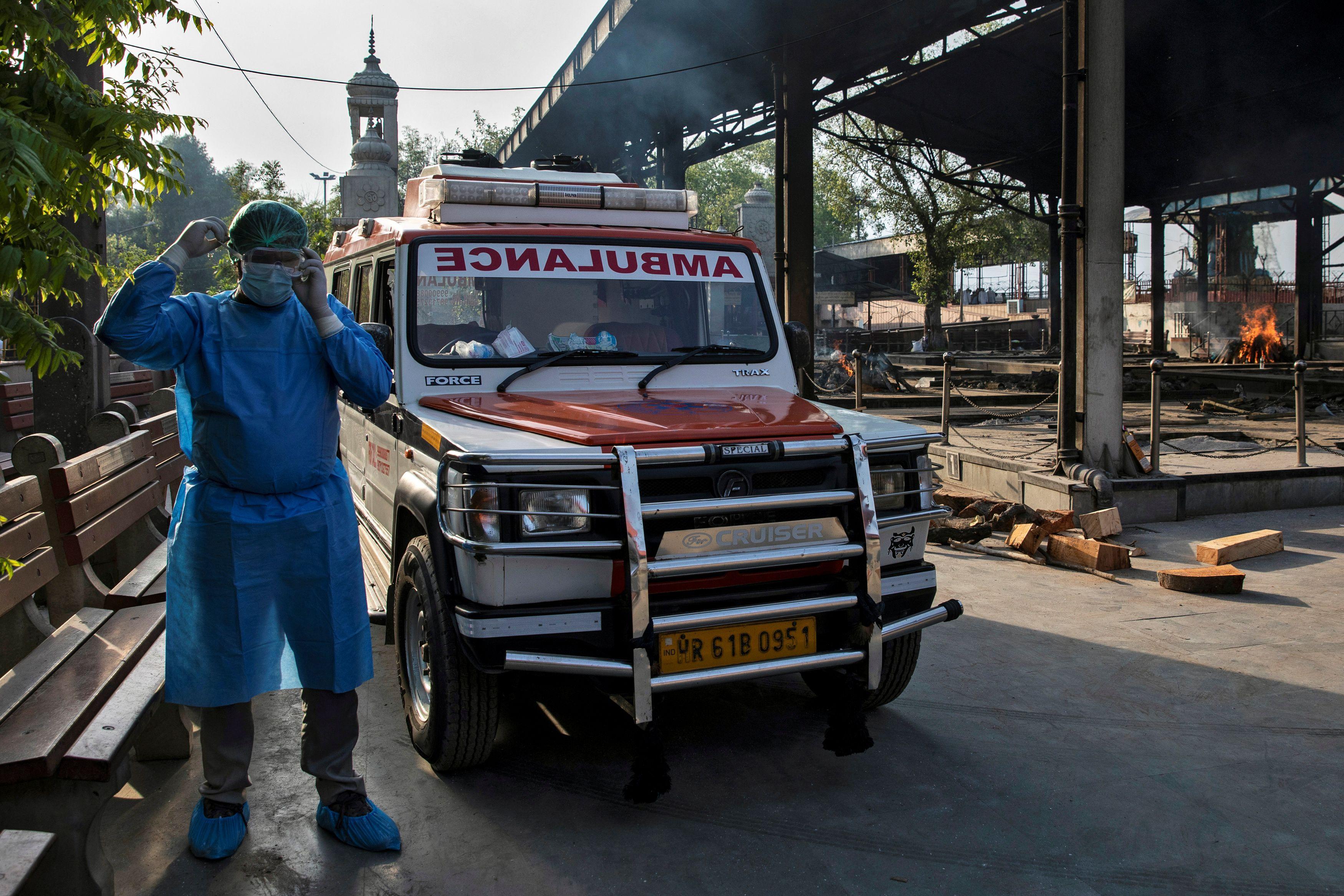 Throughout it all, Aamir sat on a nearby bench, staring vacantly into space as the smoke billowed around him.

In a way, it had been a good day for him: He hadn’t had to touch any bodies, his main preoccupation when he starts his shift. And yet his mind kept wondering what Rubi and Hamda would do if something happened to him. Who would take care of them?

Singh’s relatives blessed his body with sandalwood powder and clarified butter. By the time the flames began to lick at the pyre, Aamir and his ambulance had long left for their next funeral.