Rescue workers in Ukraine used a crane to reach the bombed-out fourth-floor apartment as they worked to free the terrified dog. Firefighters in the southern city of Nikolaev worked frantically to rescue the golden labrador which emerged from a damaged balcony clearly shaken and scared.

A rescue worker was hoisted up in a cage to collect the dog which required some encouragement before stepping onto the platform.

Video footage shows the extent of the devastation suffered by the apartment building with windows blown out and the front of the block threatening to give way.

The devastation was reportedly caused by a missile strike amid attempts by Russia to advance on the strategic city.

Once safely back on the ground, the labrador was clearly overjoyed and lost no time sniffing around what debris remained on the street.

JUST IN: Russia reacts to NATO as it intensifies attacks 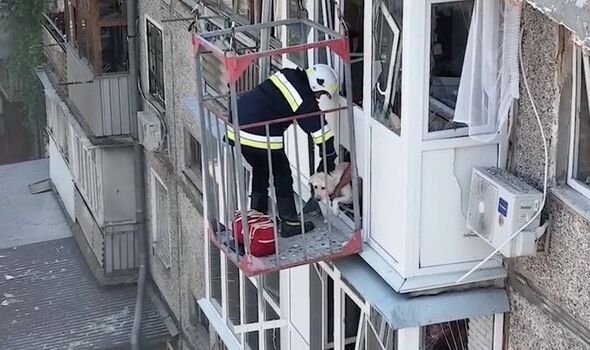 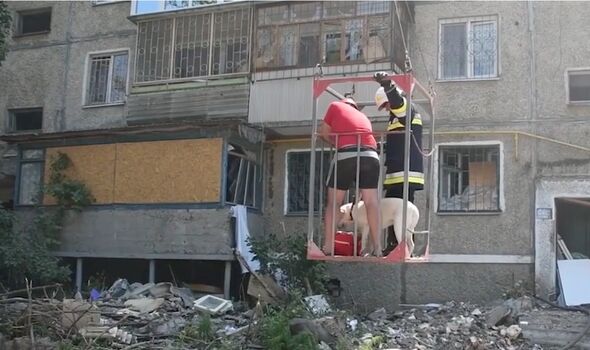 Meanwhile, Russia has pressed on with its offensive in eastern Ukraine on Thursday after NATO branded Moscow the biggest “direct threat” to Western security and agreed plans to modernise Kyiv’s beleaguered armed forces.

Ukrainian authorities said they were trying to evacuate residents from the frontline eastern city of Lysychansk, the focus of Russia’s attacks where about 15,000 people remained under relentless shelling.

“Fighting is going on all the time. The Russians are constantly on the offensive. There is no let-up,” regional Governor Serhiy Gaidai told Ukrainian television.

Ukraine: 'We can't let our guard down again' says Truss

The ambassador of the self-proclaimed Luhansk People’s Republic told Russia’s RIA news agency the Lysychansk oil refinery was now fully controlled by Russian and pro-Russian forces, and all roads to Lysychansk were also under their control.

Russian forces are trying to encircle Lysychansk as they seek to capture the Donbas region, which comprises Donetsk and Luhansk provinces.

At a summit on Wednesday dominated by Russia’s invasion of Ukraine and the geopolitical upheaval it has caused, NATO invited Sweden and Finland to join and pledged a seven-fold increase from 2023 in combat forces on high alert along its eastern flank.

In reaction, President Vladimir Putin said Russia would respond in kind if NATO set up infrastructure in Finland and Sweden after they join the US.-led military alliance. 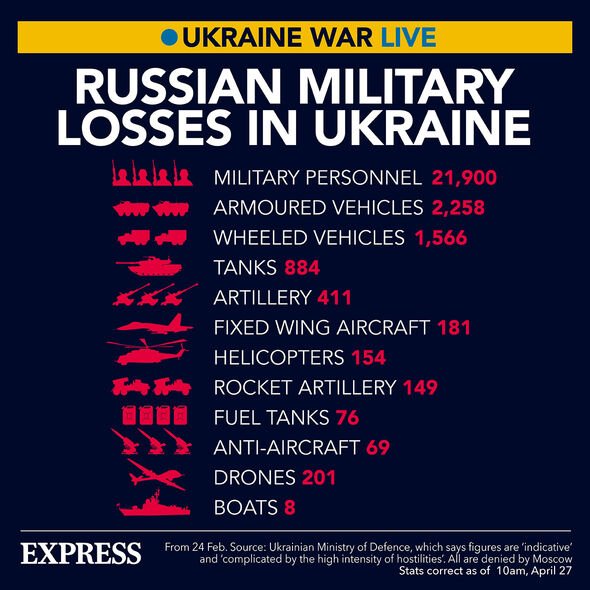 Putin was quoted by Russian news agencies as saying he could not rule out that tensions would emerge in Moscow’s relations with Helsinki and Stockholm over their joining NATO.

These included a permanent army headquarters with accompanying battalion in Poland – the first full-time US deployment on NATO’s eastern fringes.

“President Putin’s war against Ukraine has shattered peace in Europe and has created the biggest security crisis in Europe since the Second World War,” NATO Secretary-General Jens Stoltenberg told a news conference, committing to put 300,000 NATO troops on high readiness from 2023. “NATO has responded with strength and unity.”