Home » World News » The ‘Inn’ Is Out at the Beatrice, but History Still Holds Sway

The Beatrice Inn has been at 285 West 12th Street for nearly 100 years in one form or another, drawing generations of New Yorkers down the steep, narrow stairs and into a dimly lit speakeasy, an Italian restaurant, an impossible-to-get-in-the-door club and a buzzy chophouse owned by the former Vanity Fair editor Graydon Carter.

This year, the chef and co-owner, Angie Mar, will close the restaurant after service on New Year’s Eve. She plans to reopen in the spring with the same team, in a new location — right next door — and with the “Inn” dropped from the restaurant’s name. The new version will draw tangibly from its history as she reinvents the longstanding institution.

“I intended to stay here,” Ms. Mar said. “But we’ve been paying above market, numbers that no business can sustain even in the best of times, let alone in a pandemic.”

The new space, which previously housed Blenheim, is a glassy, street-level corner, filled with natural light — the opposite of the Beatrice Inn in every way. As Ms. Mar designs a new dining room and kitchen, she also wants to take time to rethink the menu.

“The Beatrice Inn has been labeled as a chophouse,” she said. “Do I cook meat? Absolutely. Do I feel like we’re a chophouse? Absolutely not.”

Ms. Mar said dry-aged beef will remain on the menu, but only in small quantities. If the kitchen sells out of its five or six steaks for the night, well then, tough — no more steaks.

“Look, I’m not going to do the Arpège thing either and start cooking vegetables,” Ms. Mar said, referring to the chef Alain Passard’s cultish, vegetable-obsessed restaurant in Paris. “I promise, that will not happen.” The menu will likely include more game birds, crustaceans and lots of wood-fire cooking, with dishes rooted in French cuisine.

Ms. Mar has always found flashes of inspiration in Parisian bistros and the most luxurious of regional French foods. Her kitchen heroes come from an older generation of French chefs, like Jacques Pépin, whom she refers to affectionately as her “fairy god-chef.” 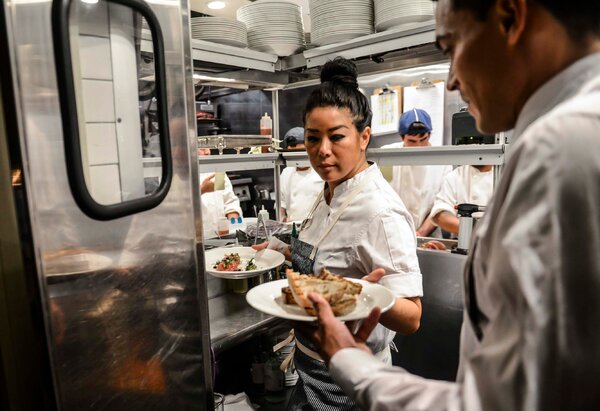 After a pre-pandemic dinner at the Beatrice Inn, where Ms. Mar went off-menu and cooked course after course for Mr. Pépin, the chef asked Ms. Mar if she was French. “You could have fooled me,” he told her.

Ms. Mar, who grew up in Seattle, considers it one of the great compliments of her career.

It was Mr. Pépin who introduced Ms. Mar to André Soltner, another old-school French luminary. Since his restaurant Lutèce closed in 2004, Mr. Soltner has stored the old glassware and serving dishes at his home in Hunter, N.Y. Charmed by Ms. Mar and her cooking, he recently offered her these artifacts.

The new space next door will be smaller, but Ms. Mar plans to bring along as many bits and pieces of New York City restaurant history as she can.

This includes Mr. Soltner’s chandeliers, maybe, and the soft, curvy velvet banquette from table 26 of the Beatrice Inn, definitely. She also has her eye on the antique mirrors in the back room, a slab of marble counter and a small piece of stained glass.

These pieces are meaningful, not just to Ms. Mar and her regulars, but also to her new landlords, Sue and Mike Politis, who are a part of the Cardia family, who once owned the Beatrice Inn and Casa Di Pre next door.

The family bought the Beatrice Inn in 1955, and Casa Di Pre in 1986. For decades, if you walked down West 12th Street during the break between lunch and dinner, and stopped in front of the building marked 285, you could hear them — along with a mix of cooks and servers from both restaurants — playing cards in the dining room.

These poker games went on for hours, fueled by coffee, cigarettes and neighborhood gossip.

“Every day we’d have our family meal and little get-togethers, and play poker after lunch, and my father and my Aunt Elsie would get into fighting matches in Genoese — it was hysterical,” said Ms. Politis.

Ms. Politis, who grew up in Queens and started working in her family’s restaurant at 13, remembers bussing and serving, working as a host, or helping to prep daily specials like homemade cannelloni, manicotti and tray and after tray of lasagna.

Her husband, who went to culinary school, did his cooking internship in the kitchen at the Beatrice Inn. And after Ms. Politis’s father retired, in 1996, the couple ran Casa Di Pre. They felt sensitive to Ms. Mar’s desire to keep the restaurant going, and invested in its success.

“Opening a restaurant in Covid, not knowing what will happen, we want to be fair,” said Ms. Politis. “So we just worked things out.”

Ms. Mar closed the restaurant after service on March 14, and furloughed most of the staff two days later. She reopened for takeout on March 20. Though business has since picked up and 26 employees are back, on many evenings during lockdown it was a skeleton crew — Ms. Mar and four other workers — all of them cooking, washing dishes and running food to delivery people.

The focus was comfort food. Ms. Mar wrote daily emails to diners on the restaurant mailing list, telling them what was on the menu and when she’d be in cooking, and answering the phone.

“I did not leave my house,” said Randi Cardia, whose mother-in-law, Elsie Garaventa Cardia owned the Beatrice Inn for 50 years. Ms. Cardia was one of many locals who ordered regularly. “Angie definitely decided to be there for people like me, and she was our lifeline,” she said.

Before the pandemic, the kitchen was known for its hulking aged meats and chilled seafood towers, but Ms. Mar’s takeout dinners during lockdown starred warm, comforting dishes like pozole verde, homemade versions of Marie Callender’s chicken potpies, and fried chicken with macaroni and cheese.

“The amount of support and encouragement that we got during the height of quarantine, when it was really, really bad here — ” said Ms. Mar, her voice catching. “I cannot let this restaurant die.”