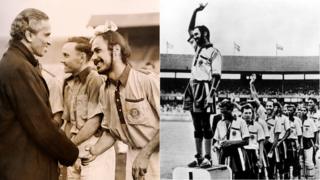 Indian sport is mourning the loss of one of its greatest heroes – hockey player Balbir Singh – who helped the newly independent country win its ever gold medal at the 1948 London Olympics.

Singh died at the age of 95 in the northern city of Chandigarh after a prolonged pulmonary illness, his family said.

In an illustrious career, Singh won two more Olympic gold medals. Even after retirement he coached the Indian team that won the World Cup in 1975.

But it was his exploits at one of the more unusual Olympics that he first made his mark.

The 1948 Olympics were held in a London still emerging from the chaos of World War Two and were known as the Austerity Games.

Food was still subject to rationing and members of the British team supplemented their meagre diets with whale meat.

Athletes, who were housed in RAF camps and school halls, were told to bring their own towels and medals were handed over without ribbons to save money.

The Indian men’s hockey team met hosts Great Britain in the final and beat them 4-0 with centre-forward Singh – then aged 23 – scoring twice in the first half.

In a 2014 interview, Singh recalled the charged atmosphere in a packed Wembley Stadium and seeing Queen Elizabeth – mother of Britain’s current monarch – who had been the last Empress of India until independence a year before.

“It’s impossible to explain the feeling of joy and happiness,” he said. “You have to experience it. I was so happy. I was on top of the world. The memory of my first Olympic Games in 1948 is still fresh in my mind.”

In another interview he told The Times of India how it had felt to see the Tiranga – the tricolour flag of the newly independent India – being raised in the medal ceremony.

“The Tiranga rose up slowly. With our national anthem being played, my freedom-fighter father’s words ‘Our Flag, Our Country’ came flooding back. I finally understood what he meant. I felt I was rising off the ground alongside the fluttering Tiranga,” he said.

The victorious Indian team received a rapturous welcome on its return home. In his autobiography, The Golden Hat-Trick – My Hockey Days, Singh recounted how huge crowds met them in Mumbai (then Bombay) where many of the players were from.

“We were swept off our feet and it was here that I realised what the victory meant to our nation, starved as it was of world class accomplishments. Hockey was the only sport that gave the country a ray of golden hope, something to cheer for and celebrate.”

The Indian team successfully defended its title in the following two Games in Helsinki and Melbourne.

In the 1952 final, Singh scored five goals in India’s 6-1 victory over the Netherlands – a record that still stands. At the 1956 Games he captained his team when they scored 38 goals in five matches and conceded none. They took gold in a close 1-0 victory over Pakistan.

Singh added silver medals to his collection at the Asian Games of 1958 and 1962, before beginning a successful career as a coach.

Prime Minister Narendra Modi was among those who paid tribute.

“He brought home lots of pride and laurels,” Mr Modi tweeted. “He also made a mark as a great mentor. Pained by his demise.”

Hockey India president Mohammed Mushtaque Ahmad said they had not only lost their greatest hockey legend “but we have also lost our guiding light”.

“His achievements in the post-independent era have been well-documented,” he said. “Hockey has lost its brightest star and everyone at Hockey India is pained by this news.”