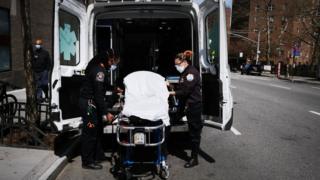 When the tannoy blasts out a “Team 700” alert at Elmhurst hospital in Queens in New York City it is because a “crash” team is needed immediately. Someone is going into cardiac arrest.

In normal times that would happen maybe once a week. Yesterday, during the course of one 12-hour shift, there was a Team 700 announcement nine times. Not one of the patients survived, according to the young doctor I spoke to.

She is one of the residents in emergency medicine, and nothing in her training could have prepared her for the harrowing scenes she is witnessing on a daily basis at the epicentre of the epicentre of this outbreak. The hospital, which has a capacity of 282 beds, is now housing over 500 patients, according to the latest email sent round by the hospital administrators.

And though it has not been declared as such, it is the first Covid-19 hospital in the country. Yes, the ER still functions – but all other patients who were admitted have been moved out. Only those who are gasping for breath are given beds.

In the initial stages of the outbreak, it was the worried well who would be turning up in this poor neighbourhood, Elmhurst. Now everyone is sick. Really sick. Half of the patients are undocumented, and don’t speak English – they work in restaurants and are hotel chambermaids. They are not “plugged in”. The calls for social distancing have passed them by.

And this medic, in her early 30s, tells me the stress is intense. Nearly everyone who arrives at the ER needs to be intubated and put on a ventilator. That would normally be a job done in the Intensive Care Unit. But they are overloaded.

These people need “pressers” – meds that will keep blood pressure up. And that is a job normally done by specialist nurses. But there aren’t the nurses to do it. So people who are untrained are having to do it. “How can I not worry when there are patients not getting the care that they need?”

And she says it is not just the old who are falling prey to this. “There are patients in their 30s and 40s with no pre-existing conditions. Equally, we had a 90-year old man the other day who was brought to the ER after he had fallen at home. He had a broken leg – but he also tested positive for coronavirus – even though he was exhibiting no symptoms.”

It is a confounding virus is Covid-19.

The hospital has been given double the number of ventilators that it originally had – but they are already being fully utilised and they need more. All are being used – and the peak of the curve is still weeks away. And she talks rather quietly when she describes a situation where not all of the people who need a ventilator are getting one.

I spoke to this young doctor after she had got home from a 12-hour shift. We were connected by a mutual friend. She said she would call me after she’d put the washing on, cooked herself something to eat, and done a bit of life admin. The mundanities of life co-exist alongside the high stress, life-and-death environment that she is living in.

She says she is not frightened for herself. “I am not worried about whether I fall ill. I will be fine. I’m young, and fit. I had a bit of a sore throat last week, and may well have had it. But the medics who are older, who have more complex medical histories are very nervous.” A dozen of her co-workers, though, have fallen ill.

In normal circumstances, if you see a patient who you think is infectious you put on PPE (personal protective equipment), and when you have finished your consultation you take off the overalls and mask and they are incinerated. At Elmhurst you start your shift wearing PPE, and you will not remove it all day – after all, everyone you’re seeing is infectious.

That has alleviated some of the pressure on kit. Also, the fact that this hospital has been the first hospital to be so much in the front line, and has had so much publicity, has meant that supplies have been forthcoming. She says, though, that her N-95 mask has to last a few days. But what happens to the hospitals further down the road? Will they get the kit they need?

I ask her whether she has had time to reflect on the enormity of what is happening. “A bit,” she says. But says that will probably come later. She says the focus right now is on doing her job, and saving as many lives as she can.

As she tells me this, the thought strikes me that if you’re driving a car on a mountain road and the brakes fail, you haven’t got time to ponder the vicissitudes of existence, you’re just trying to get down the mountain safely.

This woman is calm, self-assured and having to be mature beyond her years.

Then she opens up on the bits that are hardest about what she is doing, and concedes that much of what she has gone through will need a lot of processing afterwards

“The most anxiety I have is around ventilator allocation. Seeing people die is not the issue. We’re trained to deal with death. Nor is it the volume of people dying. The issue is giving up on people we wouldn’t normally give up on.”

She described a patient being brought in from an old people’s home. He was already on a ventilator – and was “chronically vent dependent”. His prospects were never great. But all she could see before her was the ventilator – and not the patient.

“When he came in we were so desperate for vents,” she told me, “all I wanted to do was get the ventilator off him. I wanted to get that vent off him to allow it to go to someone else.”

Playing god is not what this young woman thought she would be doing at this stage in her career.