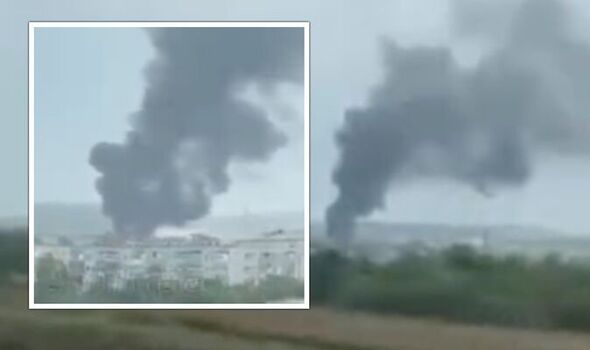 Video footage has been shared by passing motorists on a nearby road of the blaze in the Bakhchisarai district of southern Crimea. It appears to show huge plumes of dark smoke coming from a group of buildings in the distance. Several people have taken to Twitter to reports and footage of the explosion. “Conflict Watch PSF” (@AmRaadPSF) wrote: Reportedly a Ukrainian attack on a #Russian installation in Bakhchisarai district in southern Crimea.”

They wrote: “Something is on fire in the Bakhchisarai district, Crimea. Unknown what it is.”

This is the latest in a series of explosions to rock Crimea, the peninsula which Russia invaded and subsequently annexed from Ukraine in February 2014.

On Tuesday morning, an ammunition dump near Dzhankoi exploded, in an attack believed to be carried out by Ukrainian special forces.

Officials from both sides acknowledged the military target had exploded, but Ukraine has yet to claim responsibility for the hit.