Fall came early this year in New York. The cool, crisp nights took me by surprise, arriving well before I could unearth any sweaters to prepare for the chill.

When it came to dinner, it felt the same. The fridge was stuffed with a bounty of late summer spinach, ready to be whipped up into one of the light, warm weather meals I’d been cooking lately. But the temperature demanded something heartier and cozier, an edible analog of those sweaters still packed away in boxes in the basement. 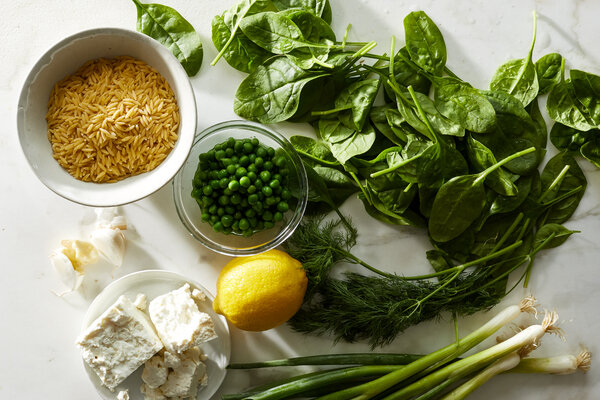 A skillet full of orzo, cooked in savory broth and showered with feta for creaminess and tang, was just the thing to warm my family up. And by adding the mound of spinach I already had on hand, I could keep the dish from tipping into the kind of carbohydrate-heavy meals winter will inevitably bring.

Added bonus: It could all be made in one skillet, and it ends up as appealing as risotto, but without all the stirring.

Cooking it is a snap, beginning with scallions, garlic and that spinach, all sautéed in lots of butter until everything melts into a verdant puddle. Then, the orzo and stock go into the pan, along with some lemon zest for brightness, and an entire cup of fresh herbs, which mellow as they cook. I love the Greek-inspired combination of dill with the spinach and feta, but I realize the herb can be divisive — though not as divisive as cilantro, which you could also use. Parsley, or parsley cut with fresh mint, would be another excellent option. You’re looking for an herbal note to round out the mineral intensity of the spinach.

As the orzo simmers and softens in that heady liquid, it absorbs the broth’s flavors and releases some starch to thicken it. The dish is done when the orzo is tender but not mushy, and the broth has reduced into a satiny sauce.

Then, right at the end, stir in the feta, along with some thawed, frozen peas. (If you forgot to thaw them ahead of time, run them under a hot tap for 10 seconds.) The peas are completely skippable if you don’t have any, but I like the way their plush texture contrasts with the chewiness of the pasta.

That’s all there is to it. Just add a festive libation, and enjoy a perfect transitional meal that walks the line between rich and lean.