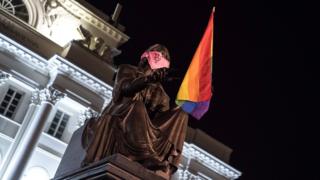 Three people accused of hanging LGBT rainbow flags off statues in Warsaw have been arrested and charged.

Activists protesting against the anti-LGBT policies of President Andrzej Duda hung the flags off statues of Jesus Christ, the astronomer Copernicus and the Warsaw mermaid.

They also dressed them in pink face masks bearing the anarcho-queer symbol.

Prime Minister Mateusz Morawiecki denounced the activists, saying the statues symbolise values that are important to millions of Poles.

However, activists who were part of the demonstrations said they were protesting against the homophobic ideology of governing officials.

Prosecutors must now decide whether to bring the case to court.

In Poland, the crime of offending religious feelings is punishable by a fine or up to two years in prison.

What has Duda said about LGBT rights?

President Duda, an ally of the ruling nationalist Law and Justice Party (PiS), is being sworn in for his second term in office on Thursday.

He was re-elected on 13 July, narrowly beating challenger Rafal Trzaskowski. It was Poland’s slimmest presidential election victory since the end of communism in 1989.

During his campaign earlier this year, he proposed incorporating a ban on same-sex marriage and adoption into Poland’s constitution.

Mr Duda and his government have also frequently used inflammatory, homophobic language against the LGBT community.

During the presidential campaign, for example, Mr Duda said the LGBT movement is “more destructive” than communism.

He also accused the community of trying to “force” LGBT rights on the nation.

Poland does not currently recognise same-sex unions – whether those are marriages or civil unions. Same-sex couples are also legally banned from adopting children.

Last month, the EU said it would deny funding to six Polish towns that declared themselves “LGBT-free zones”. Helena Dalli, the EU’s commissioner for equality, tweeted: “EU values and fundamental rights must be respected by Member States and state authorities.”

Separately, Poland also announced last month that it was withdrawing from a European treaty aimed at preventing violence against women.

Justice Minister Zbigniew Ziobro said the treaty, known as the Istanbul Convention, was “harmful” because it required schools to teach children about gender.