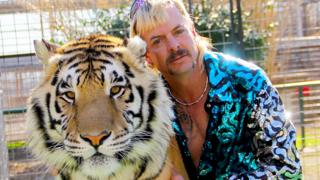 Joe “Exotic” Maldonado-Passage – the star of Netflix hit Tiger King – has been placed in coronavirus isolation in a Texas prison, his husband says.

Maldonado-Passage, 57, is serving a 22-year sentence for animal abuse and his involvement in a murder-for-hire plot.

He was placed in isolation when inmates at the jail where he was previously held tested positive for the virus, said his husband, Dillon Passage.

There are currently 226,374 confirmed cases of Covid-19 across the US.

Maldonado-Passage had recently been transferred from Oklahoma’s Grady County Jail to the Federal Medical Center in Fort Worth, Texas, US media report.

“We speak like three to five times every day, but since he’s been moved to this new facility, they are putting him on a Covid-19 isolation because of the previous jail he was at, there were cases,” Mr Passage, 24, told US entertainment reporter Andy Cohen.

“I’ve yet to speak to him since he moved.”

When asked if Maldonado-Passage is in individual quarantine, Mr Passage said: “From what I know, yes.”

The US Bureau of Prisons announced on Wednesday that all those currently held in federal facilities – approximately 146,000 inmates, including Maldonado-Passage – will be put in quarantine for the next 14 days.

The move comes amid a growing number of confirmed Covid-19 cases among incarcerated people. Dozens of federal inmates and at least 37 guards have tested positive so far.

The US locks up more citizens per capita than any other country, with an estimated 2.3 million people behind bars in federal, state, and local prisons.

Prison reform advocates say that prisoners face exceptional risk of infection, due to a lack of hygiene and overcrowding – effectively inhibiting any form of social distancing. Some US jails have already begun to release prisoners – focusing on “vulnerable” inmates – as the number of infected inmates continues to grow.

The chief doctor at Rikers Island – New York City’s largest jail – told the Washington Post newspaper that the current conditions are a “public health disaster unfolding before our eyes”.

Maldonado-Passage – the subject of docuseries Tiger King and almost overnight fame – was convicted this year for two counts of murder-for-hire and several accounts of animal abuse.

The zookeeper, who once owned hundreds of exotic animals at his park in Tampa, Florida, was accused of ordering the murder of Carole Baskin, a prominent animal rights activist.

Mr Passage, Maldonado-Passage’s fourth husband, told Mr Cohen that he plans to stay with his husband while he serves out his sentence.

“I do love Joe,” Mr Passage said. “He’s been there for me through my darkest times. I’m not just gonna dip out and abandon him when he needs me most.”