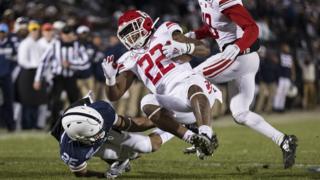 Two of the biggest college sports conferences in the US have voted to postpone all games scheduled for autumn because of coronavirus fears.

Big Ten and Pac-12 include several powerhouse teams in the world of college American football.

Big Ten Commissioner Kevin Warren said “there was too much uncertainty regarding potential medical risks to allow our student-athletes to compete”.

Mr Warren added he hoped sports could return in 2021.

Among other college sports cancelled for the next season are men’s and women’s soccer (football) and field hockey, as well as women’s volleyball.

“The mental and physical health and welfare of our student-athletes has been at the centre of every decision we have made regarding the ability to proceed forward,” Mr Warren said.

He added that the decision was taken after “hours of discussion” with the conference’s medical experts.

President Donald Trump earlier said it would be a “tragic mistake” if the season were to be cancelled.

Three other college conferences – the ACC, SEC and Big 12 – are yet to decide whether they will proceed or postpone the autumn sports season.