Gulf countries introduce range of measures aimed at curbing the spread of the novel coronavirus. 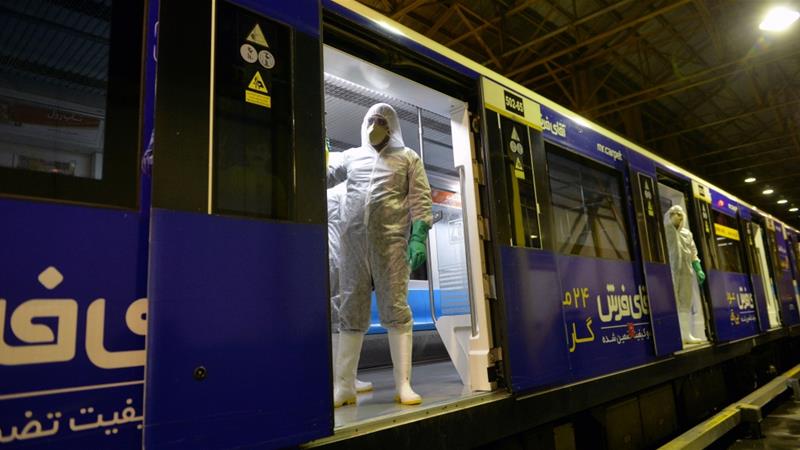 Gulf countries have responded to the coronavirus outbreak by introducing travel bans, stepping up screening measures at important entry points and rescheduling – and in some cases cancelling – significant sports and cultural events.

More than 93,000 cases of the virus have been confirmed worldwide, the overwhelming majority in China, where it originated late last year. However, the new coronavirus now appears to be spreading much more rapidly outside the Asian country.

At least 2,476 have so far tested positive in the Gulf region, including hard-hit Iran which has registered 2,336 cases and 77 deaths, including a close adviser of Supreme Leader Ayatollah Ali Khamenei who died after falling ill from the virus.

Authorities in Iran have closed down schools and universities and cancelled a series of art, film and sports events in a bid to stem the outbreak. They also designated at least 230 hospitals across the country to treat infections.

Khamenei on Tuesday said all public institutions, including the armed forces, need to do their best to support the health ministry in the fight against the virus. Some 300,000 health ministry employees are working to stem the spread of the virus.

Saudi Arabia on Monday registered its first infection, a man who arrived from Iran via Bahrain.

Mohammed Abdelali, a health ministry spokesman, told a news conference on Tuesday that some 70 people whom the infected man interacted with since arriving in the kingdom have been isolated and that their test results are expected within hours.

Also on Tuesday, Saudi officials said additional precautionary measures have been taken at border crossings, including a ban on citizens and residents of Gulf Cooperation Council (GCC) countries from entering the kingdom for 14 days after returning from places where coronavirus is spread.

The six-member bloc is made up of Saudi Arabia, the United Arab Emirates, Bahrain, Kuwait, Oman and Qatar.

The kingdom also advised citizens and residents against travelling to Germany and France, where there has been a rising number of infections. Similar advice was issued last week against travel to Japan and Italy.

Meanwhile, the Red Sea International Film Festival said it will postpone its inaugural edition, which was scheduled to run during March 12-21, in the second city of Jeddah.

“The spread of coronavirus is a battle we all must face around the globe,” said a statement posted on the festival’s website, adding that the new date would be announced as soon as feasible.

The Formula 1 Powerboat World Championship has also postponed its Saudi Arabia Grand Prix indefinitely due to the global outbreak.

On Tuesday, Qatar announced one new case, bringing the total to eight. Doha had on Sunday imposed a temporary entrance restriction on all those coming from Egypt through intermediate points.

“The measure is temporary due to the spread of COVID-19,” the Government Communications Office of Qatar said in a statement sent to Al Jazeera.

MotoGP cancelled its opening round in Qatar this weekend after the country imposed a quarantine on visitors arriving from Italy.

The seventh edition of the Doha International Maritime Defense Exhibition and Conference (DIMDEX) was also cancelled after after “extensive consultations” with Qatari officials.

In the UAE, which has registered 27 cases, this month’s electronic music Ultra festival at Abu Dhabi’s 25,000-capacity Du arena, as we well K-pop concert Music Bank at Dubai’s 17,000-capacity Coca Cola Arena have both been cancelled.

Festival organisers cited travel restrictions imposed by some countries and airlines due to the rapidly spreading virus in its reasoning for cancelling the two-day festival.

Music Bank organisers cited the spread of the epidemic in South Korea, which is the highest outside China and elsewhere.

The Art Dubai exhibition said this year’s event – scheduled to be held this month – will be postponed over concerns of “the on-going global health implications” of the coronavirus.

Conferences, concerts and sporting events are a large draw-card for foreign visitors to the UAE, which has banned all flights to and from Iran over the outbreak.

Dubai’s flagship international art fair Art Dubai, scheduled for this month, has been postponed. A women’s forum in Abu Dhabi was postponed while a yoga festival in Abu Dhabi and a Hindu Holi festival in Dubai were cancelled.

The opening round of the 2020 World Triathlon Series scheduled in Abu Dhabi this weekend has also been postponed.

American rapper and producer Russ will now perform in Dubai in November instead of March because of the virus. “I know, wild lol (laugh out loud) but outta my control,” he said on Twitter.

Oman on Tuesday confirmed six new cases of coronavirus, taking the total there to 12.

The Oman Petroleum & Energy Show (OPES), due to take place in the sultanate in March, has been postponed to September.

Germany, France and Britain have promised to also fly urgent medical supplies to Iran to help the country combat the Covid-19 outbreak.

Some of those infected by the new coronavirus develop the pneumonia-like disease Covid-19, which seems to be more dangerous for those with pre-existing lung problems.