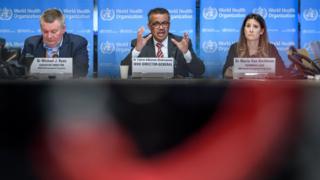 US President Donald Trump has accused the World Health Organization (WHO) of mismanaging and covering up the spread of the coronavirus after it emerged in China.

He added he would halt WHO funding while his administration reviewed its actions.

Peter Piot, from London’s School of Hygiene and Tropical Medicine, said this would be “dangerous and short-sighted”

But does Mr Trump have a point about the WHO’s response to the virus?

What does the WHO do?

Set up in 1948, it is the part of the UN responsible for global public health, co-ordinating vaccination campaigns, health emergencies and supporting countries with primary healthcare.

It is funded by fees and voluntary contributions from its 194 member states, with the US the largest single contributor.

Did the WHO fail to challenge China?

President Trump has accused the WHO of failing to challenge China’s early assertion there was no evidence of human-to-human transmission of the coronavirus.

China first informed the WHO of “a pneumonia of an unknown cause, on 31 December”.

On 5 January, the organisation said the information it had from China at that time showed there was “no evidence of significant human-to-human transmission”.

And on 14 January, it tweeted preliminary Chinese investigations had found “no clear evidence of human-to-human transmission” of the new virus.

The same day, however, the Wuhan Health Commission said the possibility of limited human-to-human transmission could not be excluded, although the risk of sustained transmission was low.

Around the same time, other WHO statements raised the possibility of some human-to-human transmission, referring to what was known about other coronaviruses such as severe acute respiratory syndrome (Sars).

And on 22 January, the WHO, following a brief field visit, made a much clearer statement human-to-human transmission was happening in Wuhan.

Although, it’s worth saying a full delegation with international experts did not visit China until the second week of February.

Then at the end of January, the WHO praised China for its efforts to contain the virus, including its “commitment to transparency”.

Did the WHO ignore experts from Taiwan?

Mr Trump said there was “credible information to suspect human-to-human transmission in December”, an apparent reference to a warning Taiwan says it sent to the WHO.

But the evidence published so far shows Taiwan’s exchanges with the WHO did not mention human-to-human transmission.

Taiwan is not one of the WHO’s members as the territory is not recognised by the UN.

The WHO says it has been sharing all information with Taiwanese health experts.

But last month, after a senior official refused to discuss Taiwan’s response to the outbreak, the WHO was accused of being unduly influenced by China.

“The WHO should have been more critical and looked more closely at the situation.”

But he added President Trump’s remarks were an attempt to shift blame for the US’s own lack of preparedness.

The WHO has said in response to Mr Trump that it will review its actions, but added that all its guidance was intended to limit human transmission.

And although the WHO has been criticised for praising China’s initial response to the virus, Mr Trump himself praised the Chinese, in a tweet, on 24 January.

However, Chinese officials did initially try to cover up the outbreak in Wuhan and silence those raising concerns.

Did the WHO misadvise on travel bans?

Mr Trump said the WHO had misadvised “there was no need for travel bans” and “fought” with the US over banning travel from China and other countries.

The WHO has never directly criticised the US approach and it is up to national governments to implement border or travel restrictions.

But it did publish initial advice, on 10 January, recommending no international restrictions and repeated this the same day it declared a public health emergency, in late January.

The WHO has said: “Restricting the movement of people and goods during public health emergencies is ineffective in most situations.”

It believes closing borders could lead to a rise in people trying to travel illegally and so possibly spread rather than stop infection.

But this advice was eventually ignored by most countries, including the US, where Mr Trump stopped all foreign nationals who had been in China in the 14 days prior from entering the US from 2 February.

Mr Trump has said this reduced the spread in the US.

And the White House’s top medical adviser, Dr Anthony Fauci, has said: “Our shutting off travel from China and, more recently, travel from Europe has gone a long way to not seeding very, very intensively the virus in our country.”

But a study published in February by the Journal of Emergency Management found travel bans had been effective in decreasing the spread of previous viruses, such as Ebola and Sars, in the short term only.

Send us your questions