The US Election 2020 is expected to be one of the closest ballots in years, with US President Donald Trump and former vice-president Joe Biden head to head in the earlierst exit polls. BBC presenters Andrew Neil and Katty Kay noted the high mortality rate among Trump voters in the past four years had not helped the Democrats recover the support they need to win the vote. Mr Neil said Mr Biden’s party struggled despite the high rate of younger voters having registered to cast their ballots for the very first time.

Mr Neil said: “It puzzles me how the Democrats find this such an uphill struggle.

“When you look at the trends in America it should be going their way. It’s a younger country , it’s a better-educated country, it’s a less white country than before.

“Five million people who voted for Donald Trump in 2016 are dead, so they won’t be voting again.”

Ms Kay added: “It’s also a president who has not made much attempt during the course of his presidency to reach out to those people. 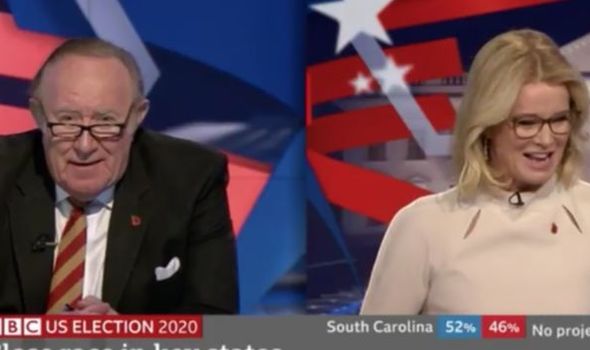 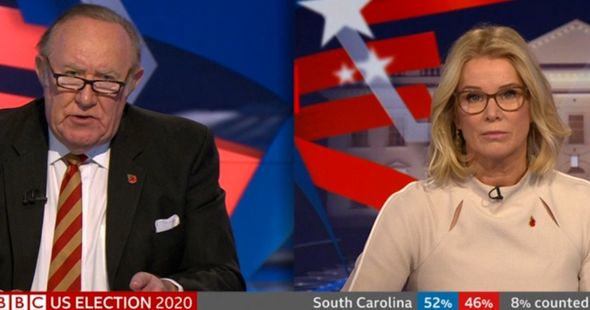 “He has continuously appealed to the base of his part. During this campaign, I don’t think anyone…no one would deny that his focus is on that base of people.

“He has not been particularly interested in expanding that.”

Mr Neil however noted the demise of Trump supporters showed no sign of having helped Democrat candidate Joe Biden, as polls showed President Trump closing in on his lead shortly before the US Election 2020.

He said: “There are five million fewer people, even than just four years ago, without college degrees. They tend to vote for Mr Trump.

“There are 13 million more minorities and whoite Americans, 13 million, with college degrees. They tend to vote Democrat.

“And yet here we are, Katty tonight, still looking at something of a struggle. The Democrats stills not being able to get Florida. We don’t know yet, it’s still open but even if they do it’s a struggle.”

Mr Neil added: And there are other states too where it isn’t clear what is going to happen.”

The BBC veteran even confronted Democrat strategist Amanda Renteira about her party’s inability to deliver on its promise for a blue wave at the US Election 20200.

But Ms Renteira insisted Mr Biden would not require the Sunshine State to secure the White House.