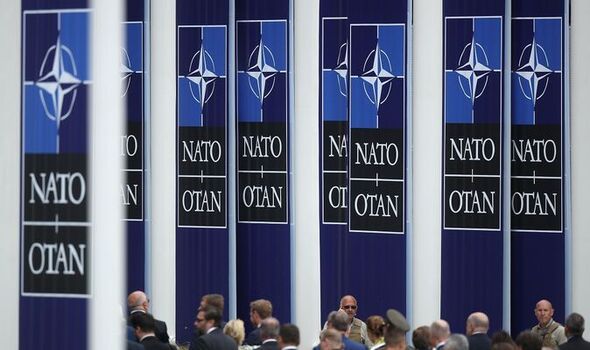 Speaking to the Sunday Express, the Foreign secretary revealed she had met with the Finnish government last week which along with Sweden are considering ending their neutrality and joining the alliance. Finland has an 833 mile border with Russia and lost a lot of its territory after the Soviet Union invaded in November 1939 in what was called the Winter War.

The effect of the war led to the term “Finlandisation” when a much larger neighbour forces a smaller one to not pursue policies against it during the Cold War in the 1960s, 1970s and 1980s.

On Finland and Sweden becoming members, Ms Truss told the Sunday Express: “That’s a decision for NATO as a whole.

“We are already working more closely with Sweden and Finland as part of the JEF program (Joint Expeditionary Forces).

“We are very committed to deeper security ties. In fact I met the Finns today to discuss that.

“We need to make sure that countries in Europe are safe. There are a number of ways we can do that but we want to support that.”

Support for Nato membership has grown to 53 percent in Finland. The survey by Finnish broadcaster YLE also revealed just 28 percent were against Nato membership.

In Sweden, support for Nato shifted to 41 percent for joining the alliance against 35 who were against – the first time those in favour has exceeded those against. Ukraine has also taken a step towards NATO membership after being admitted to its committee on cyber security.

NATO was set up in 1949 as a bulwark against Communist threats from the Soviet Union and its allies in the wake of the Second World War providing a “nuclear umbrella”. It now has 30 member states including Eastern European countries which were in the former opposing Warsaw Block.

Under Article 5 of the treaty if a member state is attacked then it commits all member states to war.