God save the queens — for research purposes.

You might even call the operation a “sting,” as it took a bit of subterfuge to finally capture the Asian giant hornet queens. Entomologists trapped three hornet drones last week, then tagged them with radio trackers and followed them back to their nest.

The nest was located inside a tree in Blaine, Wash., just south of the border with British Columbia.

State wildlife officials wrapped the tree in plastic and vacuumed up the colony on Oct. 24, then toppled the tree on Wednesday to dig the queen out of hiding.

Entomologists actually found two queens inside the nest, the Washington State Department of Agriculture says. The queens were either two “virgins” preparing to strike out and found their own colonies, or one virgin and one old queen who may have spawned the nest.

Officials shared video of the captured queens on Wednesday. The video shows the two black-and-yellow, thumb-sized behemoths crawling around inside separate glass vials. 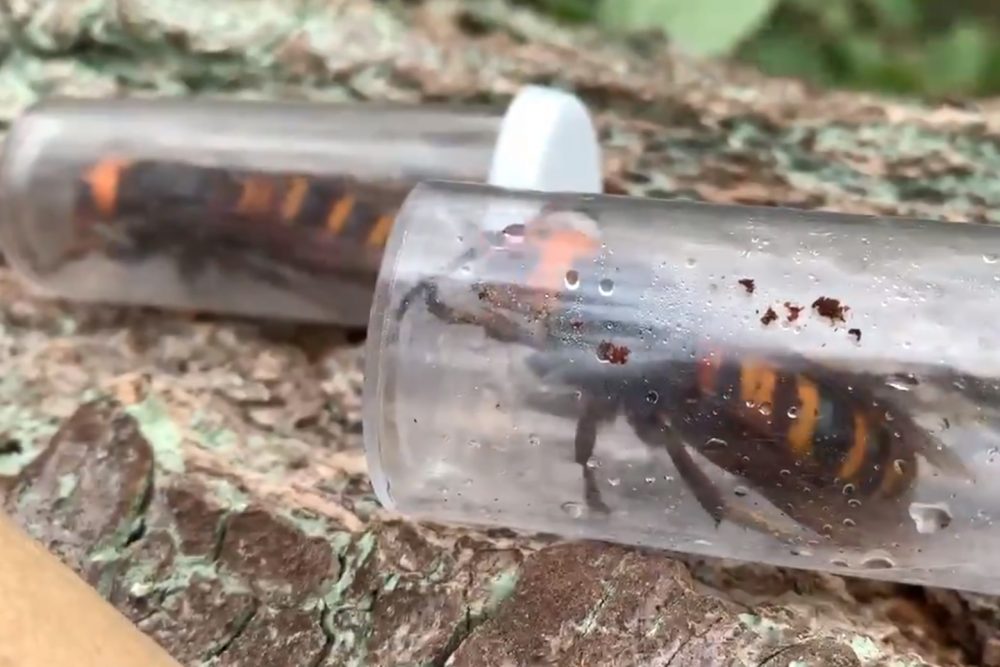 Entomologists captured 13 live hornets in addition to the queens. They also killed 85 more by sucking them up with high-tech vacuums.

Asian giant hornets are native to China and Japan but they started spreading into North America last year, sparking fear that they might decimate vulnerable honey bee hives in the U.S. and Canada. The first ones were spotted near Nanaimo, B.C., in August 2019.

The insects were nicknamed “murder hornets” earlier this year, and that name is well-deserved. A handful of the armoured hornets can wipe out an entire honeybee colony in an afternoon, slaughtering the bees one by one while shrugging off hundreds of stings. The hornets then capture the honeybees’ young and bring them back to the nest for food.

Murder hornets are relatively huge when compared to the bees they prey upon. Each one measures four to five centimetres (1.5 to 2 inches) long, and has a toxic stinger that can cause excruciating pain for humans. One victim described the sting as a “red-hot thumbtack” earlier this year.

Their heads are completely yellow with two big, black eyes. Their bodies are black and their abdomens are striped black and yellow. 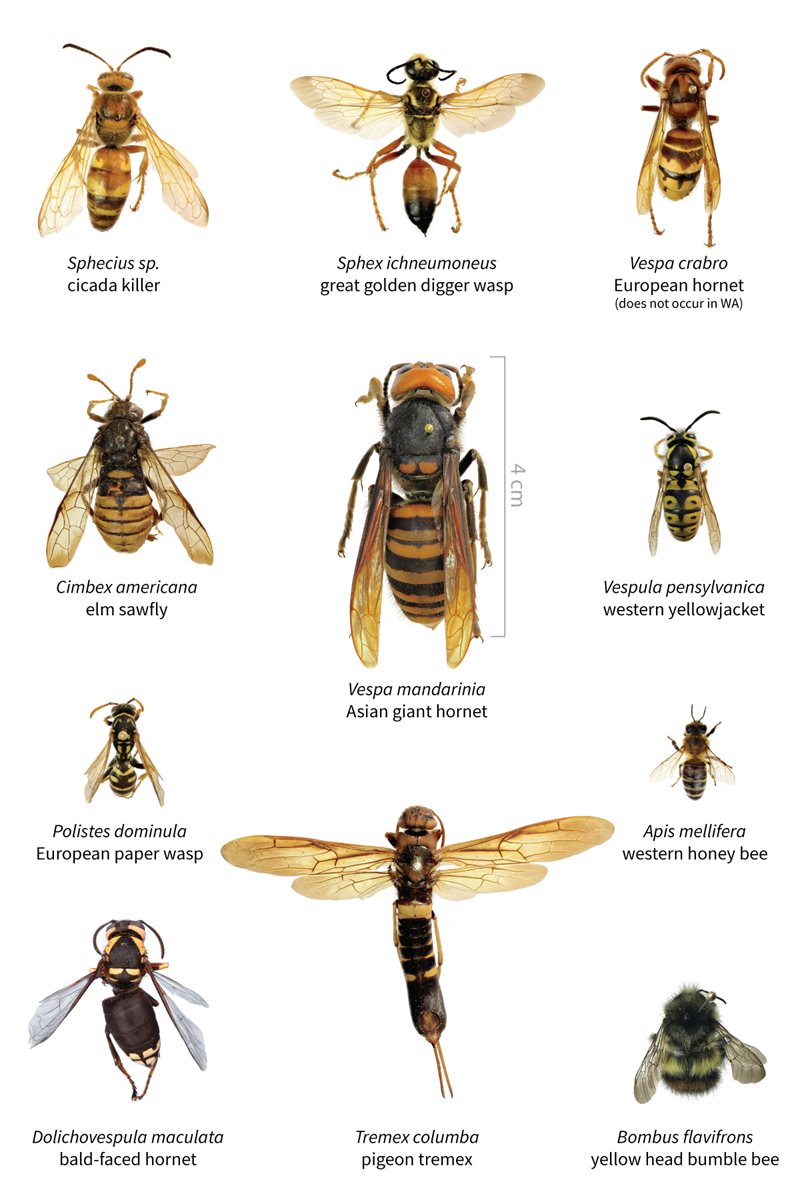 The hornets do not pose a major threat to humans, despite their threatening nickname. They are unlikely to sting unless they feel the nest is threatened; dozens of people die in Asia each year after stumbling upon a nest without protection.

Washington entomologists wore state-of-the-art suits to deal with the hornets this week. Their puffy white outfits looked like a cross between a spacesuit and a hazmat suit, and were designed to protect them from swarms of stinging murder hornets. 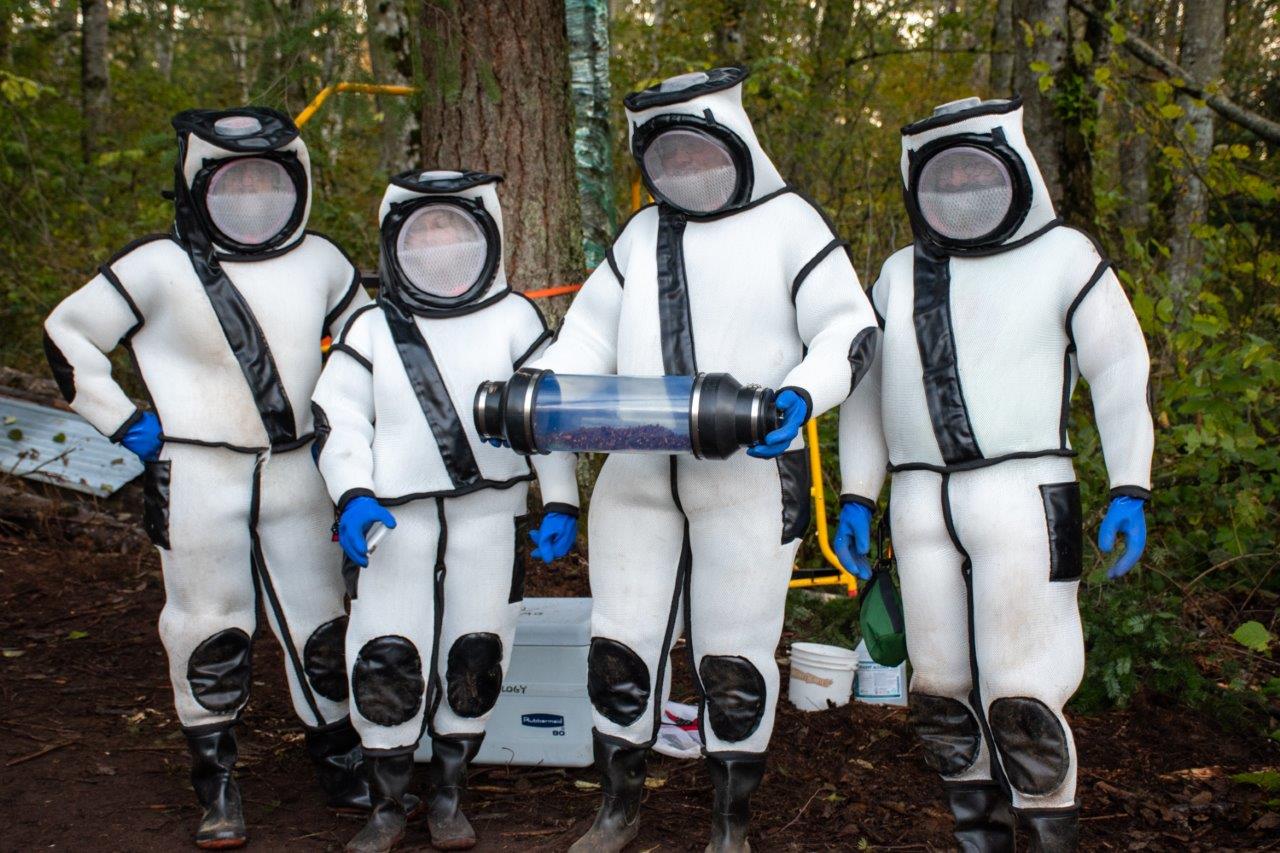 Wildlife officials are hailing the operation as a good first step in the fight against the Asian giant hornet.

Officials in the U.S. and Canada have been setting traps for the hornets along the West Coast since last year.

The first confirmed nest in Canada was wiped out last fall on Vancouver Island.

Anyone who sees one of the Asian giant hornets in B.C. is urged to immediately contact the Invasive Species Council of B.C. at 1-888-933-3722, or submit information through its website.