High pressure from the Atlantic will sweep across the UK next week, bring highs of 30C in London, according to Net Weather’s latest hot weather maps. But today the weather is set to remain humid and showery, with thunder and gusty winds also possible in some areas.

“Either side of the trough there’ll be sunny spells over the North of Scotland but also scattered showers in a chilly northerly wind.

“Across remaining parts of England and Wales, expect a showery day.

“Some will be heavy perhaps giving thunder, hail and gusty winds, particularly where you see sunny intervals for any length of time. 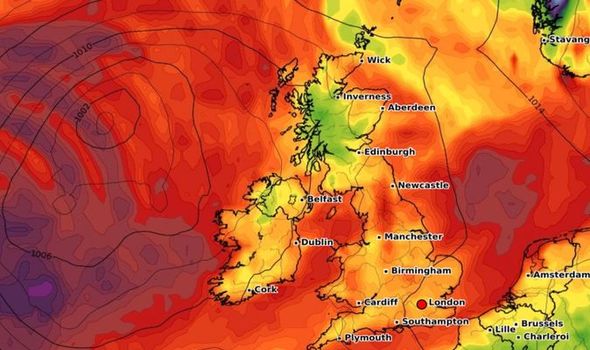 Temperatures are set to remain under 20C across the UK.

Some evening showers are expected, particularly across England and Wales.

Mr Scholey said: “The North of England continue to see showers after dark, but elsewhere, they should become fewer and lighter, allowing skies to break here and there in generally light winds.

“Over Scotland and probably Northern Ireland later it should become mainly dry, with clearing skies. In the North and West, it’ll turn quite chilly, with some Highland glens perhaps seeing temperatures fall as low as 5 or 6C, but a more general minimum will be 8 to 11C in the North and 12 to 14C in the South.” 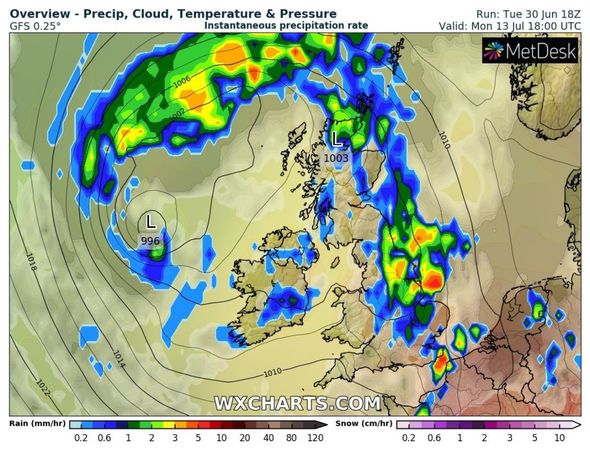 “Winds generally though will be light, with top temperatures 13 to 16C in the North and 17 to 19C further South.”

On Thursday downpours over northern and central England will slowly move east with showers quickly appearing in the south.

While the latter can be heavy at times, further north is expected to be mostly dry.

Met Office’s long-range forecast predicted temperatures to be “above average” in July. 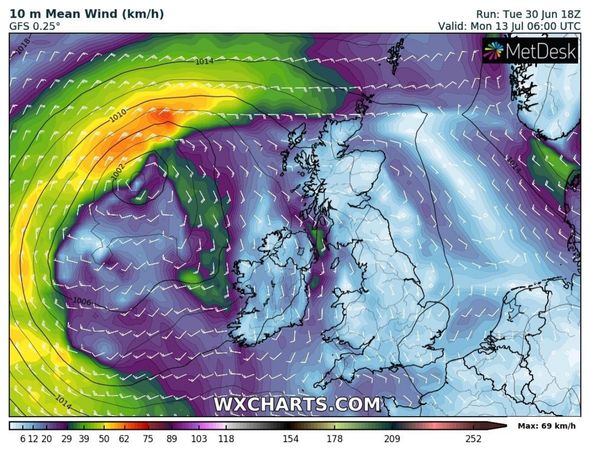 Met Office’s website said: “A general settling trend is expected to take place early in this period, as outbreaks of cloud and rain in the south, and showers in the north, give way to higher pressure from the Atlantic.

Some spells of rain will travel from the west but could be experienced countrywide.

“Whilst scattered showers, or even spells of rain with strong winds, will continue to arrive from the west at times, and could affect the whole country, these are likely to be fewer and further between than of late.

“Such spells look likely to become increasingly confined to the north-west through the period.

“Temperatures will remain around average; often rather cool in the north and in more unsettled spells, to rather warm, or even locally warm and humid, in sunnier weather in the south.” 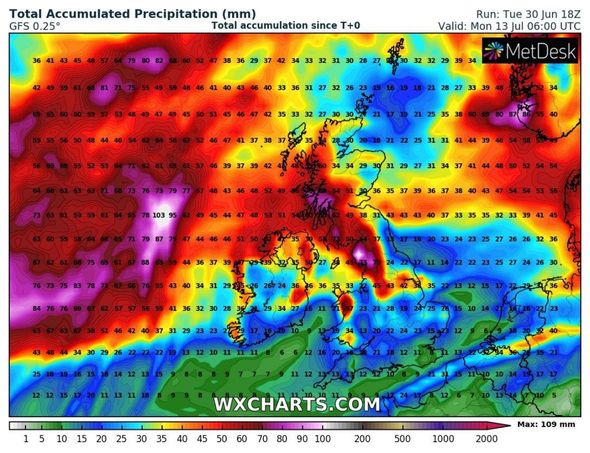 “Temperatures are expected to be above average overall,” it added.

The second half of the month will continue to be settled overall, but the longer range forecast has lower assurances.

Dry, fine weather will be predominant with rain likely to move away from the northwest allowing more settled weather for longer here too.

The second half of the month has greater chances of warm or hot weather than earlier in the month.

The south-east is particularly expected to see warm weather, but with a low chance of thunderstorms too.

However, temperatures are set to be above average overall.