According to Netweather, the next few days will be cloudy at times, with high pressure lingering towards the south. Weather fronts from the Atlantic will bring more cloud, especially across the north and west as southern areas remain most dry, before sizzling temperatures arrive later this week.

The weekend will offer some hope to Britons wishing to take a short holiday thanks to a heatwave.

The Met Office prediction for Friday onwards reads: “More unsettled conditions with spells of rain and strong winds are likely to affect the north and northwest at times.

“There is chance that these wetter interludes could spread more widely and affect much of the UK.

“Temperatures are likely to be mostly around normal, although it may become warm for a time in the south and perhaps very warm in the southeast. 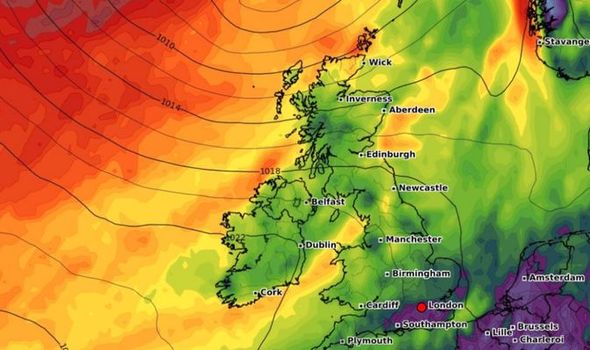 “Towards the end of the period, more settled conditions are likely to develop, across many parts.

“Spells of wetter and windier weather are possible across northern and western areas at times.”

Nick Finnis at NetWeather said today is “likely to see a fair amount of cloud again, with a few light showers around, more general rain moving in across Scotland and N. Ireland in the evening.

“Cooler across the south compared to Monday. 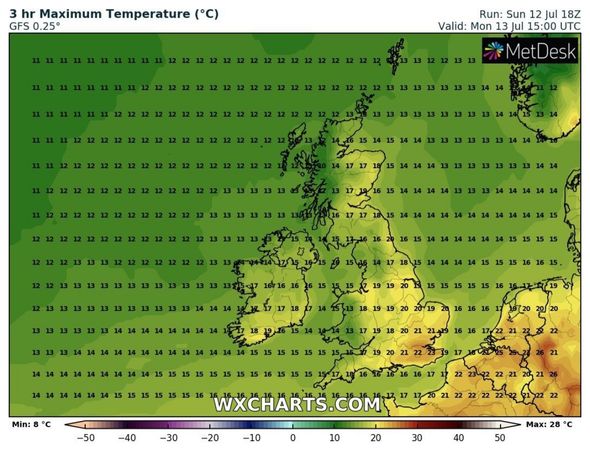 He added the sun will come out later in the week.

Mr Finnis said: “Some uncertainty over detail from mid-week, with weather models differing a bit between them with detail.

“But it looks like Wednesday may be another generally cloudy day, with showery rain spreading southeast across more western areas, drier towards the east, perhaps with some brightness towards eastern coasts. 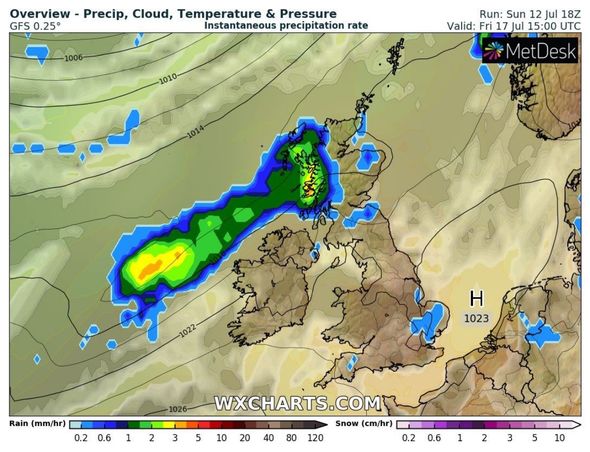 “Cloudy again on Thursday and Friday, with a few light showers or patchy drizzle, but some brightness possible east of high ground and across the south and east of England.

“Feeling humid though and warm where the sun does come out in the south and east.”

Oli Claydon, of the Meteorological Office, said: “As the week goes on, temperatures are going to rise – but there will be quite a lot of cloud around so there are not going to be crystal-clear conditions everywhere. 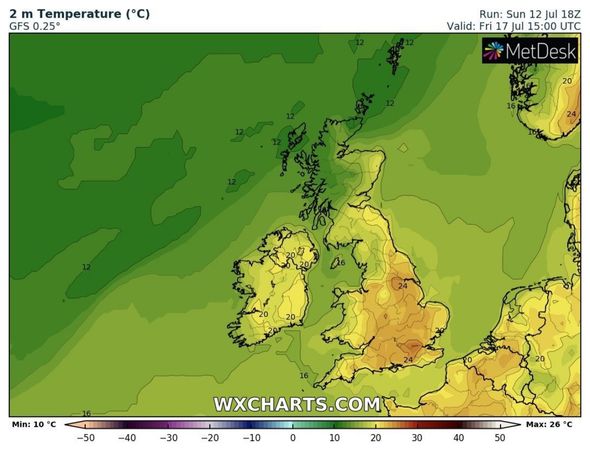 “The sunniest weather and highest temperatures are likely to be south-east of a line stretching from The Wash to Southampton.

Met Office data for the month so far suggests July is on course to be the coolest since 1988.

Precipitation is also close to double the normal so far, at 30mm in England and Wales, Met Office figures revealed.

The prediction comes after June was one of the wettest for 89 years – wetter than all but eight Junes since 1931.