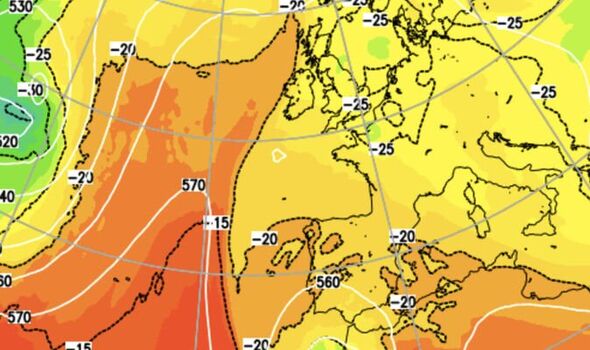 Thermometers will rocket through the coming days with the fiery blast threatening to smash 100-year March records.

Britons are cracking out the sun cream for the highest temperatures of the year so far driven by a searing flame of Continental heat about to lick the UK.

High pressure engulfing the UK will keep any rain at bay, instead dishing up lashings of blue skies and sunshine as it sweeps in a swathe of hot air.

Jim Dale, meteorologist for British Weather Services, said: “We expect to see the warmest spell of weather so far this year, and temperatures could reach 21C (70F) by Thursday in parts.

“It is going to be very spring-like for most of the week, and this is the result of a large region of high pressure which migrates towards us this week.”

Northern regions will be unusually warm thanks to a ‘foehn effect’ which causes air falling over mountains to heat up.

This could see the mercury in parts of Scotland and northern Wales this week soar into the 20Cs.

Mr Dale, author of Weather Or Not?, explained: “The foehn effect often brings higher temperatures to northern regions such as Scotland.

“A drag of south-easterly air across high ground warms as it falls over the hills, and this is what we expect this week.

“It is going to be very pleasant across most places however, with plenty of sunshine and blue sky.

Warmth will waft in from the South of France and northern Italy steered in by high pressure across northern Eurpoe and the Baltic Sea.

Glorious sunshine will reach almost nationwide pushing temperatures well above the 9C average for the time of year.

“A warming trend will continue into mid-week, and it will be dry with a lot of sunshine which will dominate through the week ahead.

“Somebody somewhere will get up into the low-20Cs which is well above par.

It will be a fine, dry and warm week ahead.”

The fine weather is being driven by a strong region of high pressure–a so-called ‘anticyclone’–wedged over the Baltic Sea close to Scandinavia.

It will bring fine, dry and warm conditions to most parts of the UK through this week, according to the Met Office.

Meteorologist Martin Bowles said: “The prolonged dry weather is being caused by a strong high pressure currently over the Baltic Sea.

“There will be more sunshine on Monday across most of the UK with no rain at all.

“Temperatures will be above average, especially in the Southeast.

“Temperatures may well reach 20C along the moray firth in Scotland and perhaps in a few sheltered spots in south-east England.”

Netweather forecaster Terry Scholey said: “The weekend may see the beginning of a change, as our resident anticyclone shows signs of slipping to the Northwest.

“This would bring somewhat colder but clearer air from the North, but apart from the odd shower over the North and East of Scotland, it would continue mainly dry.”

A raft of temperature maximums face threat this week with Tuesday looking like smashing a 100-year record.

Ladbrokes has slashed the odds on this spring warming up to the hottest ever offering 4-6 from 10-11 that records will tumble.

Spokesman Alex Apati said: “Things have finally taken a turn for the better on the weather front, and we’re now well on course for a record-breaking hot spring, if thew latest odds are anything to go by.”

Early signs that April may follow suit prompted Coral to offer 4-5 on next month soaring into the record books.

Spokesman Harry Aitkenhead said: “Temperatures are on the rise and with spring beginning now, hopes are high for a scorching April.

“We make it odds on to enter the record books as the UK’s hottest ever.”