Much of the UK can expect temperatures to rise to the low-20s next week, as weather conditions start to settle. BBC forecasters have described it as a “mini-heatwave”, with the Met Office predicting highs of 24C on Tuesday. The latest weather charts also forecast the marked change in temperatures, as much of Britain is expected to enjoy the sunny conditions ahead of the Easter weekend.

The warm weather is set to move in from Monday morning, with temperatures reaching 18C in parts of England by 3pm.

The higher temperatures will mostly be confined to the east of England, but the mercury can still be expected to rise to the mid-teens across much of the UK.

Tuesday is set to be even warmer, with forecasters expecting highs of 24C by the afternoon.

Charts by Netweather show much of England turn a deep orange on Tuesday, as the mercury rises above 20C.

The capital can expect temperatures as high as 23C. 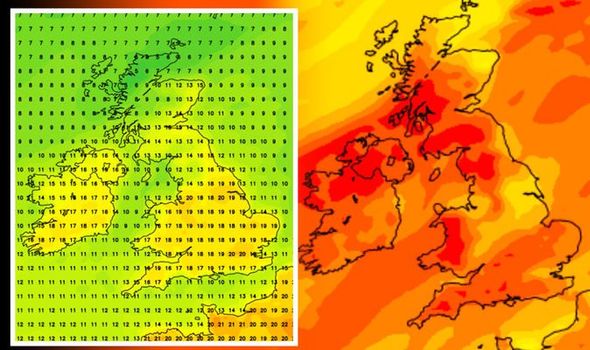 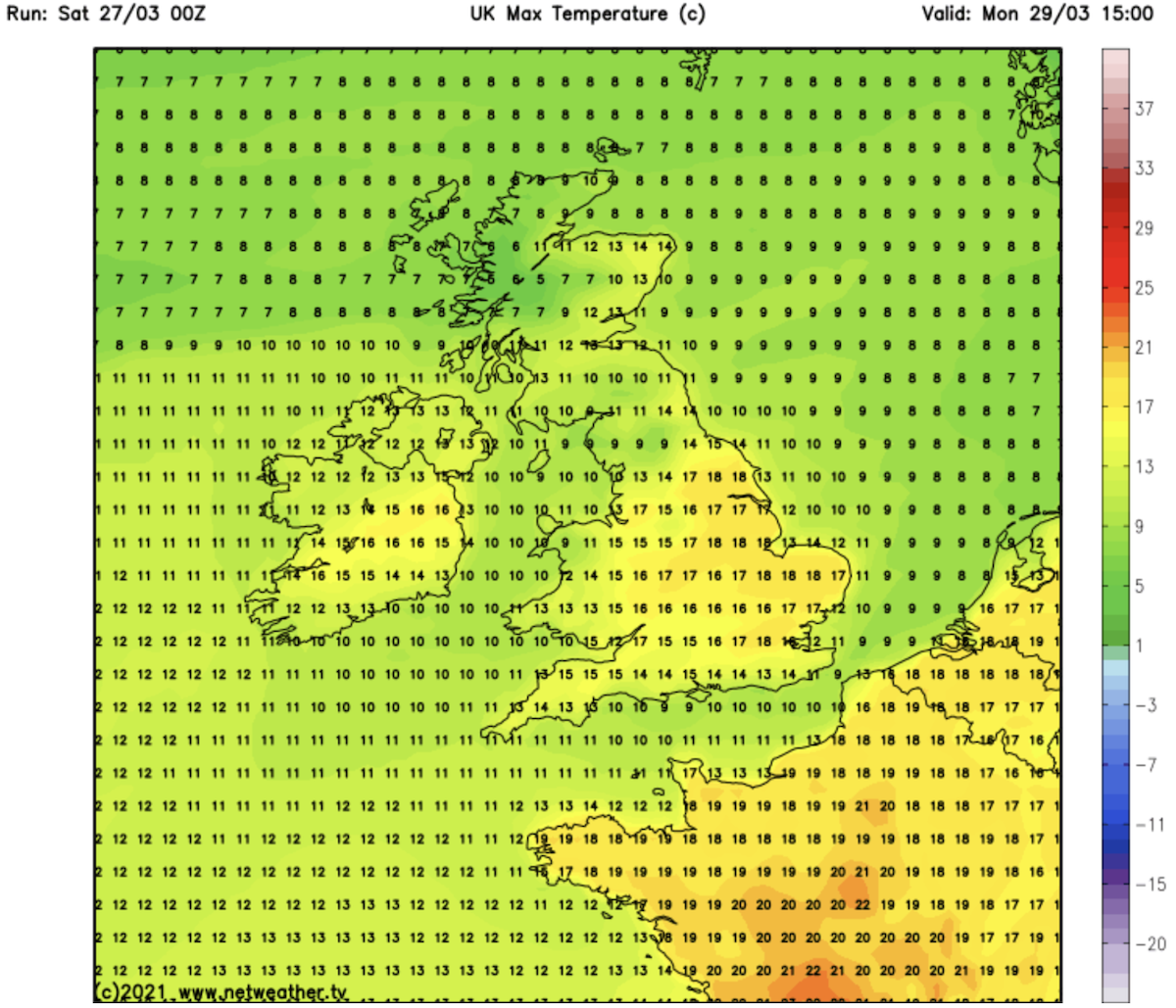 Temperatures will be a little cooler further north, with highs of 16C forecast.

Scotland and Northern Ireland is set for the mercury rise to the low-teens.

The chart shows the mercury is set to reach the high-teens and low-20s across the country by 3pm.

Humidity maps show the UK turn a deep red on Tuesday, indicating it could feel even warmer. 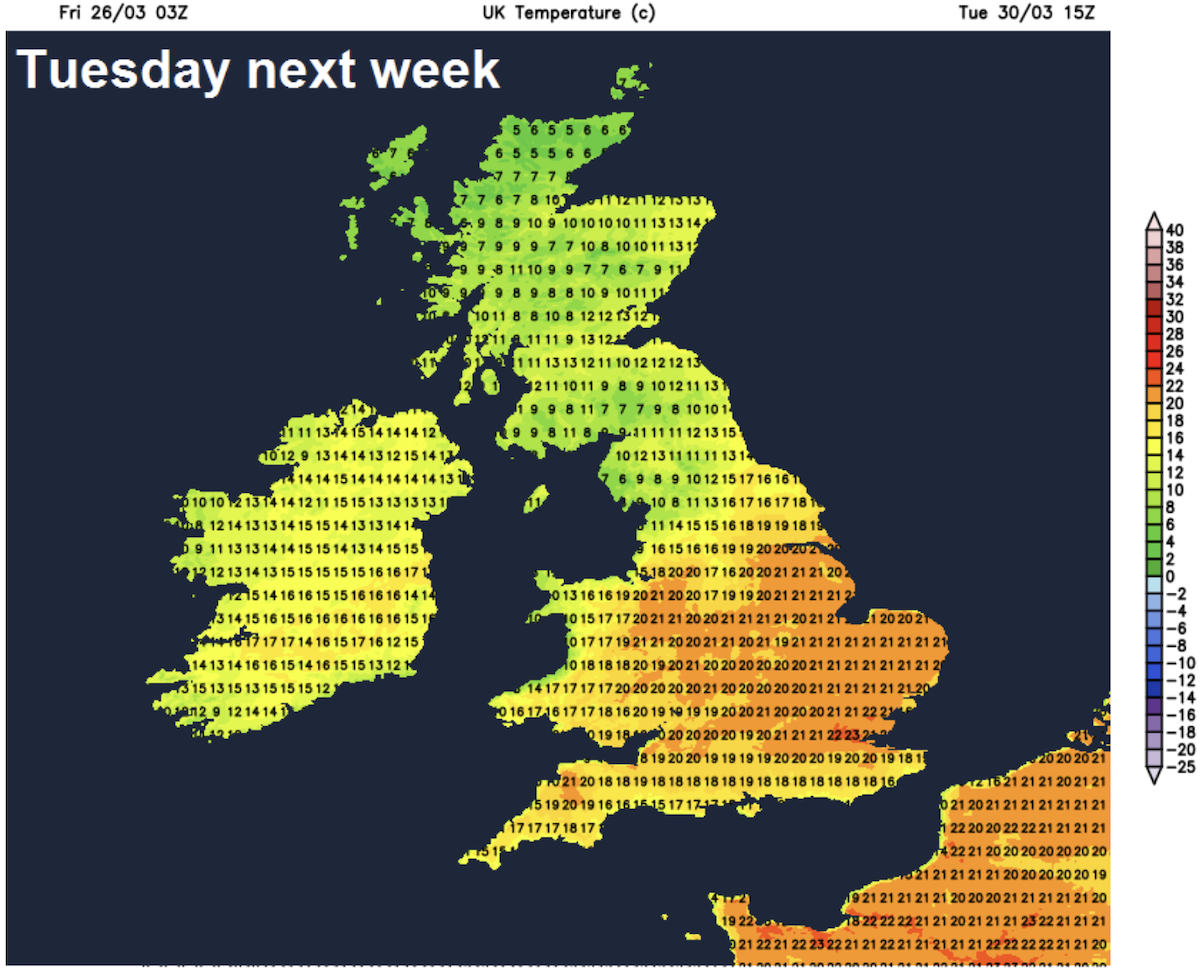 Met Office forecasters said the southeast of England could see temperatures soar to 24C on Tuesday.

Chief Meteorologist Andy Page said: “In sheltered central and southern parts of the UK, weather conditions will be much calmer with temperatures climbing in the March sunshine to highs into the low 20s, with the possibility of 24.0 C in southeast England by Tuesday.”

Much on the continent is set to see temperatures soar at the start of the week. 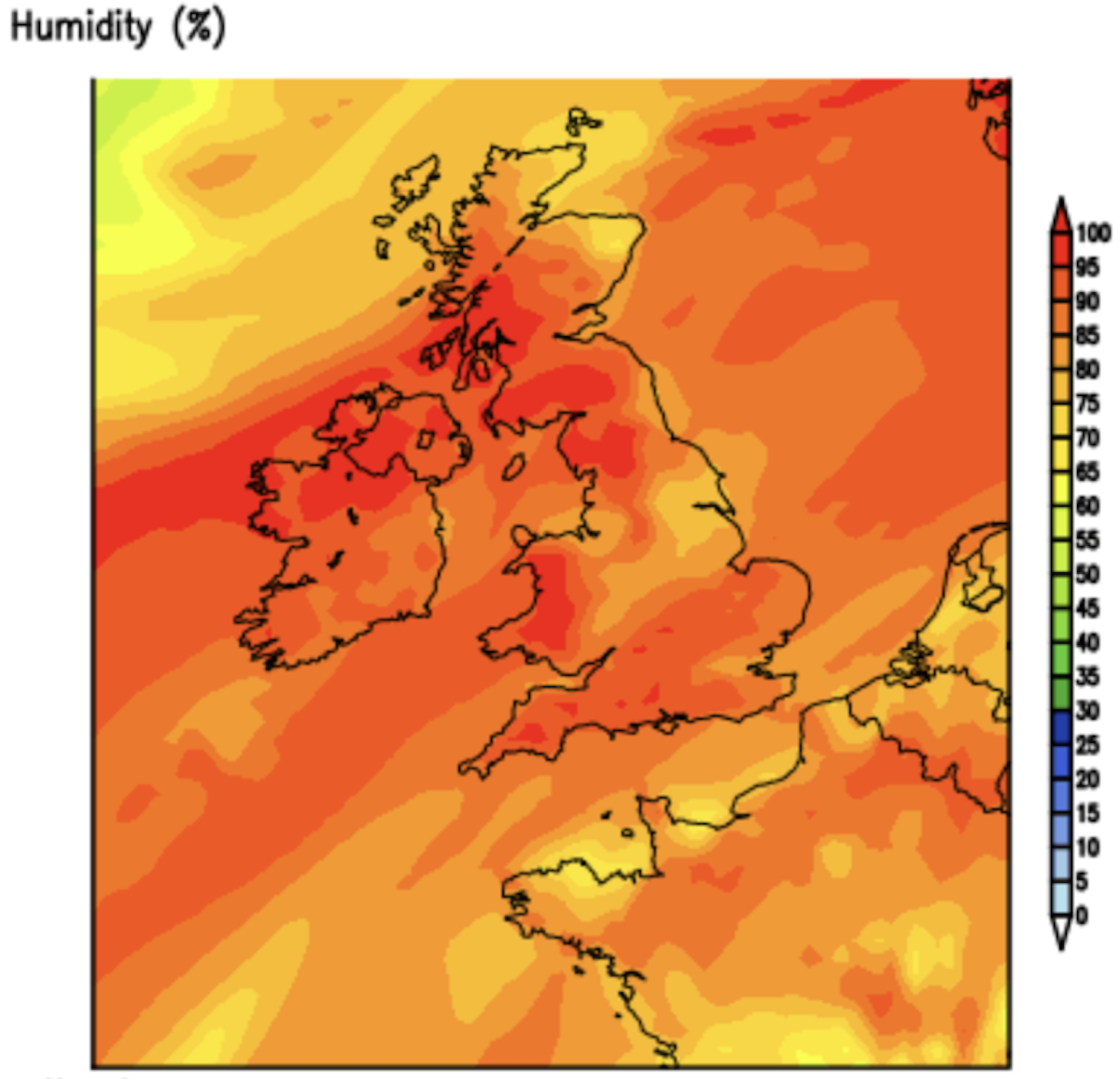 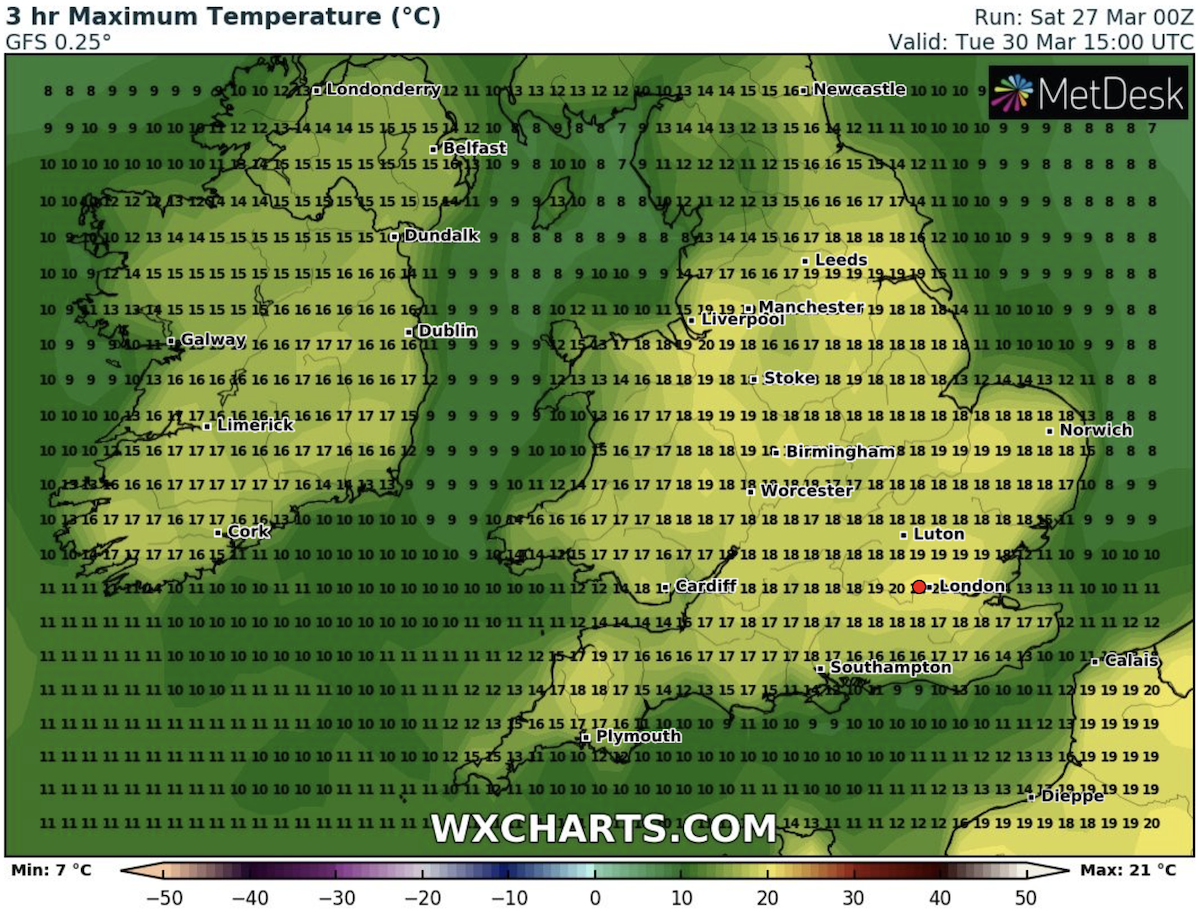 He said: “For most of us next week high pressure will be in charge.

“That is going to bring in all this mild, warm air from the south.

“The temperatures will continue to rise through Monday and Tuesday. The peak on Tuesday could be 24C.” 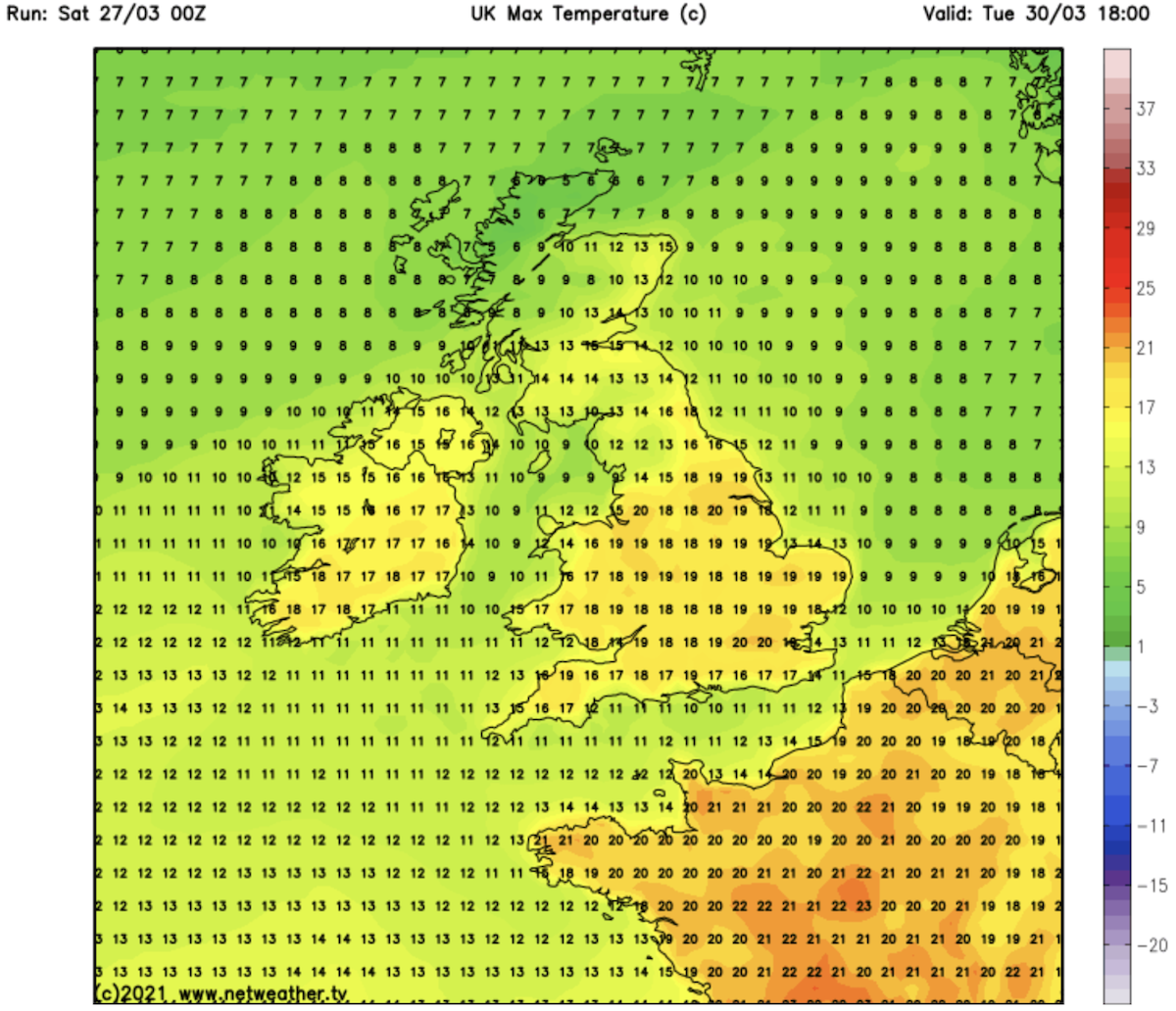 As a result, BBC Breakfast host Rachel Burden described the upcoming warm weather as a “mini-heatwave”.

The highest temperature ever recorded in March was 25.6C on March 29, 1968 at Mepal, in Cambridgeshire.

Tuesday’s forecast is set to be just shy of breaking the record.

But forecasters have warned the warm temperatures won’t stick around for long with the mercury expected to plummet to the single digits on Wednesday afternoon.