A ferocious jet stream over the North Atlantic will sweep low pressure from Canada and the US next week. Temperatures will fall as low as 0C in central Scotland at the end of October, with northern areas of England including Newcastle and Liverpool shivering at 3C. This could lead to a layer of snow settling at the start of November in central and western Scotland, according to the latest snow depth models from WXCHARTS.

The BBC’s long-range forecast from Monday, November 2 to Sunday, November 15, predicted snow to fall on higher ground in northern and western parts of the UK.

It said: “The weather is looking unsettled into early November, particularly across the northern half of the UK.

“Low-pressure areas will be driven eastwards over the north Atlantic and into the UK, depositing rainfall and ushering in blustery winds once again.

“Some of the showers over high ground in the north and west will fall as sleet, hail and occasionally snow. 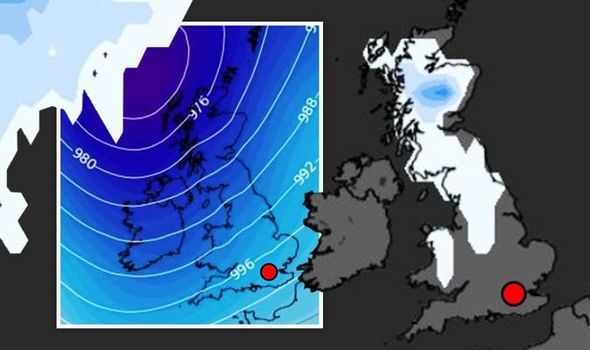 “But widespread lowland snow seems unlikely at this stage. Brief spells of drier, brighter and occasionally milder weather will occur between the frontal zones.”

The forecast added the wintry spell will start during Monday, October 26 and Sunday, November 1, due to the jet stream over the Atlantic pushing over freezing lows.

The BBC said: “A strong jet stream over the north Atlantic will steer more low pressure systems across the UK.

“Cold plunges of air across Canada and the northern USA seem to be one of the reasons why the jet stream will be so strong and areas of low pressure could be quite vigorous as they track towards the UK over the Atlantic. 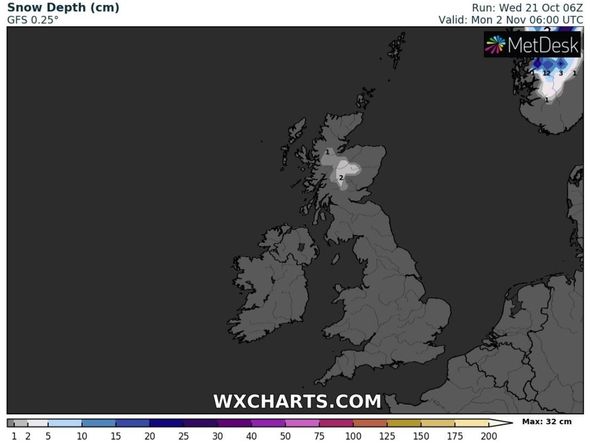 “The cold air over Canada will contrast with the much warmer than average sea surface temperatures over the northwestern Atlantic.

“Strong contrasts in temperature give the jet stream added strength.

“With low pressure dominating the week, most of us should prepare for extensive cloud, spells of rain and strong winds at times.

“The wettest weather and strongest winds are expected to shift further northwards, frequently affecting western Scotland. Southern and southeastern England will have a few drier and brighter days, between fronts.” 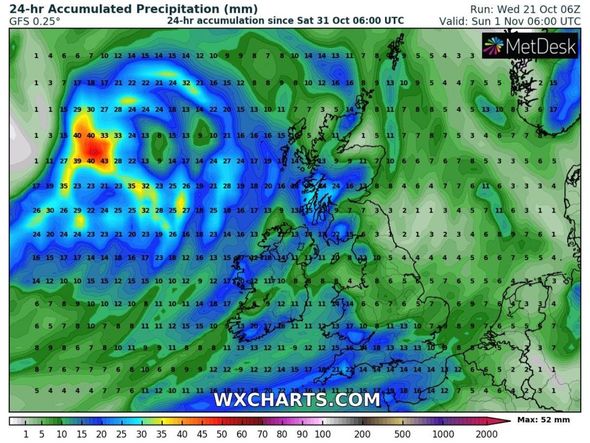 The forecast said: “Confidence becomes low towards the end of the month. However, the early part of the forecast period will likely see a gradual transition to a generally more unsettled pattern across the whole of the UK.

“Spells of rain and showers are likely, with these turning wintry over high ground in the north and northwest.

“There may also be the odd settled spell at times during this period, but they are likely to be short-lived. 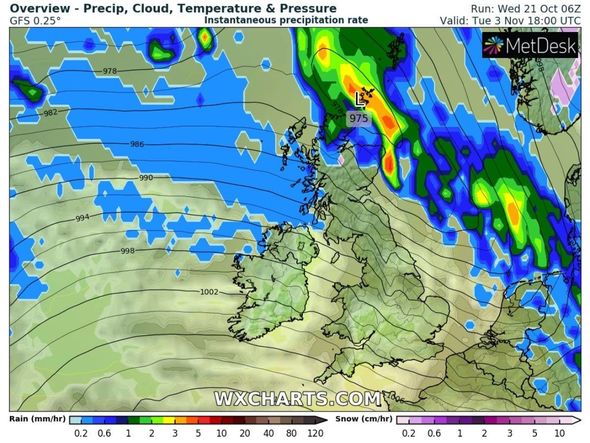 “Temperatures likely to stay at or just below average throughout.”

Netweather’s long-range forecast warned of snow potentially falling later in November too, between Monday 9 and Tuesday 17.

The forecast said: “This period will probably have frequent north-westerly winds and temperatures fluctuating around the long-term normal but overall on the cool side, and high pressure periodically ridging into the west and south.

“There is a chance of some places, mainly on high ground and in the north, seeing their first sleet/snow of the season, but the confidence in this is currently low. 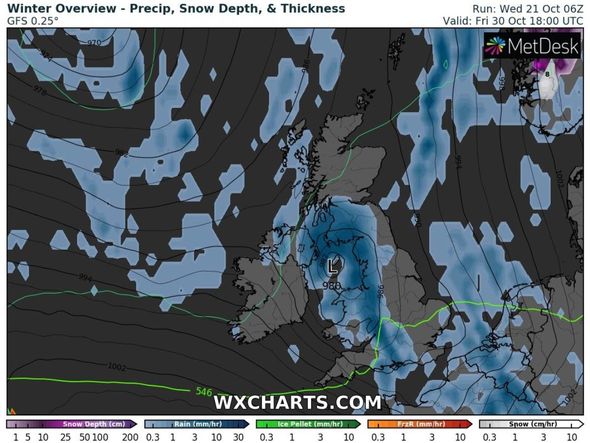 “The prevailing airflow may turn more westerly towards mid-November with the weather turning more unsettled generally.

“Temperatures are forecast to be a little below normal overall during this period, but not unusually so, with negative anomalies of around 1C in most parts of the country.

“Rainfall totals will probably be below normal in south-east Scotland and north-east England, but near normal in most other regions.”