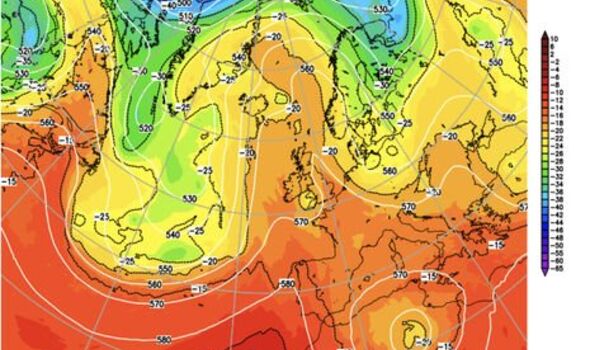 It will push temperatures through the coming days around 10C above average boosting hopes for a glorious barbecue Easter. Cloud and rain expected over the next 24 hours will finally give way to blue skies and glorious sunshine, forecasters say. As heat and humidity build from the Atlantic today, parts of the country can expect ‘lively’ thundery downpours.

Met Office meteorologist Aidan McGivern said: “As temperatures rise on Wednesday there will be some quite lively downpours, especially towards central and southern parts of the UK.

“But away from the showers, we expect temperatures in the high tens perhaps 20C somewhere like London or to the north of London.

“Temperatures will be widely above average.

“Thursday will bring some outbreaks of rain but on the whole temperatures are rising and the weather is becoming more settled as we go into the Easter weekend.”

Warm weather this weekend will be driven by a plume of air soaring out of Africa on a wave of high pressure.

Temperatures will rocket into the low-20Cs from Wednesday as Britons are told to get the t-shirts ready.

Weather models reveal ground temperatures to crank up to a sizzling 24C (75F) by Good Friday.

Jim Dale, meteorologist for British Weather Services, said: “Humidity will rise on Wednesday and with an improving picture in the weather, the cloud start to break and it will be time for t-shirts.

“It turns more settled through the latter part of the week and in the run-up to Easter, as high pressure builds.

“We then get a bit of the desert as the warm air comes in from Africa at the end of the week.”

Sweltering forecasts have prompted bookies to slash the odds on this weekend bringing the hottest Easter ever.

Ladbrokes and Coral are offering 2/1 from 5/2 on records tumbling with Coral adding 1/4 on 2022 being the hottest year on record.

Ladbrokes spokesman Alex Apati said: “Brits are strapping in for a Bank Holiday scorcher, and the latest odds suggest it could well go down as a record-breaker.”

Coral’s John Hill added: “With temperatures on the rise, we have slashed the odds on this weekend being a record hot Easter.

“If the forecasts are to be believed, we could see Easter eggs melting this year.”

Persistent rain in parts of the country delaying the onset of sunshine and blue skies should finally let up on Thursday.

Temperatures could creep higher than 21C with some forecasters expecting to see maximums in the low 20Cs.

Weathertrending’s John Hammond said: “By Wednesday the trend will be for much of the rain to fade away eastwards bringing brighter skies.

“After mid-week, it will be dry and feel pleasant with light winds, and temperatures will be on the rise.

“Some places could hit the low-20Cs just about.”

Warmer weather will bring a sneezy sting in the tail with pollen levels set to rise over the Easter weekend.

Experts warn Britons hoping to get out and about to enjoy the good weather to keep a hay-fever kit handy.

Airbourne allergens expert Max Wiseberg said: “High pollen counts are forecast across the south and east of England on Monday.

“Tree pollen could be released earlier than usual and in a shorter space of time leading to a more severe tree-pollen season.

“People with allergies should prepare a hay-fever kit to suit their needs which may contain antihistamines and a nasal balm.”

A spokesman for the University of Worcester, which produces pollen forecasts with the Met Office, added: “Birch pollen will pose a high risk in much of England and Wales as the weather warms up this week.”

However, Britons are gearing up for a barbecue Easter weekend as the nation gears up for summer-like warmth.

Exacta weather forecaster James Madden said: “Britain could be in for its first taste of early summer warmth.”