Despite the sun shining, a bitterly cold Arctic air stream has gripped many regions today (Bank Holiday Monday), bringing snow showers in the north and around coastal counties. And the brutal conditions are set to continue this week, according to the latest weather models.

He wrote on Twitter: “The second northerly blast I mentioned in the video forecasts still looks a distinct possibility.

“GFS 06z view shows the potential for a double whammy.” 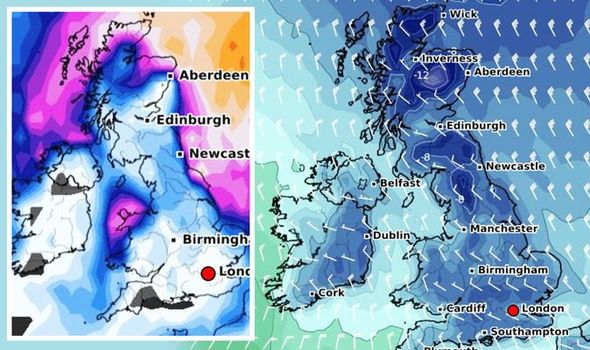 “Tomorrow it stays very cold. All regions have a mix of wintry showers and sunny spells.

“Further accumulations of snow are expected over high ground in the north. A widespread and sharp frost returns in the evening.

“During Wednesday it remains very cold and there is a risk of wintry showers in the southern half of the UK. In the north more prolonged outbreaks of rain, sleet and snow could spread eastwards. The greatest risk of snow is over high ground and the Scottish mountains could see further substantial falls.

“By the weekend high pressure may build in from the west to bring dry conditions. Daytime temperatures recover but sharp nighttime frosts continue to be a risk.

The BBC added the cold Arctic air is expected to sweep into southern regions of England later in the week.

The forecast between Monday, April 5, April 11, said: “From Sunday and into next week the weather may turn much more unsettled, with a stronger cold front arriving from the north bringing polar air from the Arctic. This may only reach Scotland by Sunday with some uncertainty on the exact timing.

“Our computer models are heavily suggesting that this will not be the case, and a trough of low pressure will extend from Scandinavia. This will help a deep low pressure system develop around Easter Monday and linger for much of the week, keeping it unsettled and windy but also keeping the colder air in place.

“The combination of colder air and unsettled weather from fronts means there is a risk of some lowland snow, which may be heavy in places. Pinning down the location of the fronts is, unfortunately, not possible at this range, but we have higher confidence that it will tend to be unsettled rather than dry.

The Met Office also added between Saturday, April 10 and Monday, April 19: “The start of the period is looking very cold and wintry, especially for northern areas.

“Uncertainty remains in how far south this very cold air will extended. Within this a mixture of sunny spells and showers remains likely. Some of these outbreaks may be wintry, especially in the north.

“Furthermore, strong winds are expected for northern parts at first, though easing later.

“After this, conditions are likely to turn drier and more settled for most, with the greatest likelihood of unsettled spells in the northwest.

“Temperatures look to be largely below average for this time of year, with notable overnight frosts developing throughout.

“There is a possibility that temperatures will lift nearer to or slightly above average later in the period.”