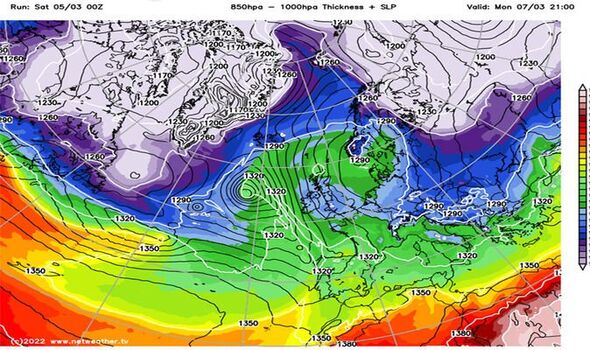 Spring will grind to a shivering halt this week as sub-zero temperatures and snow sweep into Britain.

A calm before the storm this weekend will bring cold, dry and bright conditions before Polar hell grips the nation.

Britain’s weather is about to turn ‘quite interesting’ as the floodgates open to the fury of the east, forecasters warn.

John Hammond, meteorologist for weathertrending, said: “As low pressure is diverted from southern Europe, a raw and strengthening wind from the Continent will be squeezed in our direction by midweek.

“On Sunday most of us will have dry and a bright day after a frosty start across some areas, but otherwise some fine weather, albeit chilly weather.

And that chilly theme continues into next week, it could get quite interesting next week.

“There is the prospect of even colder air crossing over parts of Ukraine and some of that air making its way to the UK.”

It comes as rising temperatures in the Arctic stratosphere threaten a cold blast on par with the notorious 2018 Beast from the East.

The event left swathes of the country knee-deep in snow, while freezing gales blew in from Eastern Europe.

It was triggered by a Sudden Stratospheric Warming (SSW) which caused the Polar Vortex–the dome of air over the North Pole–to split and slide across Europe.

Meteorologists say a warming pattern has now been confirmed in the Arctic Stratosphere with the vortex showing signs of movement.

Jim Dale, meteorologist for British Weather Services, said: “A displacement of the Polar Vortex is starting to show in the direction of Russia which means the cold air will follow.

“During the start of the week we expect a southerly airflow which turns south-easterly, bringing colder air out of Italy and the Continent.

“Initially this will bring cold, dry, frosty conditions although there is then the potential for some snow over high ground in parts of the country.

“Later in the week we look to the Atlantic, and a battle between milder air coming in from the west and cold air in situ over the UK.

“This is when we could see more in the way of snow.”

The SSW may jolt the jet stream boosting the cold blast and bringing heavy snow to parts of Britain.

Experts warn the UK is ‘still in winter’s clutches’ with cold snaps more common during March than December or January.

Mr Dale added: “This sort of event is not unusual for this time of year.

“It is more common to see snow during early spring.”

James Madden, forecaster for Exacta Weather, said: “The jet stream may come under the influence of an SSW event bringing winds in from the east.”

Bookies are hedging their bets on historic snowfall during the coming weeks with Coral at 4-5 on a record cold March.

Spokesman Harry Aitkenhead said: “Spring and summer are on the horizon but it won’t feel like that this month.

“March now odds on in our book to break the record for the coldest third month of the year ever recorded.”

Ladbrokes is offering 5-4 on record snowfall this month down from 2-1 last week and 2-1 on a March mega-freeze.

Spokesman Alex Apati said: “An imminent Arctic blast has forced us to slash odds on this month entering the record books for all the wrong reasons on the weather front.”