Jo Farrow at Netweather said temperatures could exceed the current hottest day of the year so far, which was Tuesday, March, 2021, with highs of 24.5C hit. On Bank Holiday Monday, highs of 20C could sweep as far north as Glasgow in Scotland, with Newcastle and Cumbria slightly further south seeing 17C. And temperatures will continue to soar with latest heat maps from NetWeather showing highs of 25C hitting Kent and Essex in the south-east of England on Saturday, June 5 and Sunday, June 6.

Manchester and Essex could bask in 21C, while London, Bristol and Birmingham are hit with 21C.

Ms Farrow told Express.co.uk: “It does look like the UK will get warmer through the long weekend.

“Monday may be higher on Monday and Tuesday in the 20s. 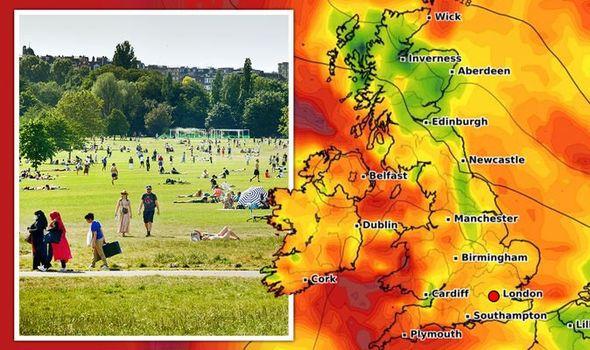 “The highest temperature this year was back in March after a cold, dry April and wet, cold May, as it hit 24.5C.

“So we might beat that next week with some long-missed warmth and sunshine for a change.

“Enjoy the bank holiday warmth if you can, and remember the sunscreen.” 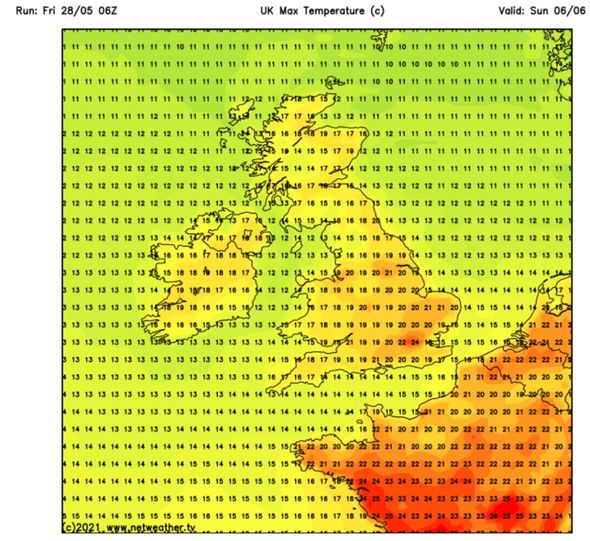 Ms Farrow added in her weekly forecast that the “very warm” spell could start from Sunday and linger until the end of the week.

She wrote: “There will be more sunshine across the UK on Sunday but some stubborn low cloud near North Sea coasts which will have crept in again overnight.

“Inland and to the west it will be a lovely day with sunshine, warmth and dry. Such a change.

“Temperatures should reach 23 or 24C with many areas being warm in the high teens and low twenties. 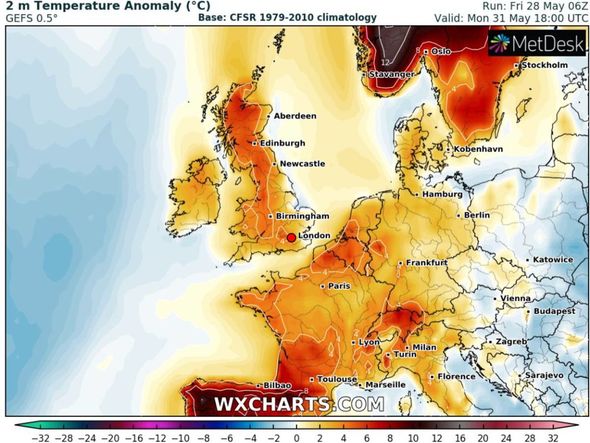 “Monday could be even warmer. The frontal band which had looked to intrude from the NW, now looks to be held at bay by the high pressure.

“So, another fine, sunny, warm day. Up to 24 or 25C. Greater London, along the M4 and Merseyside, Greater Manchester areas all looking very warm.

“A bit more of a breeze from the east or south as the day goes on.

“Beyond that, if you have half term plans in the UK, the weather continues to be fine, and very warm. 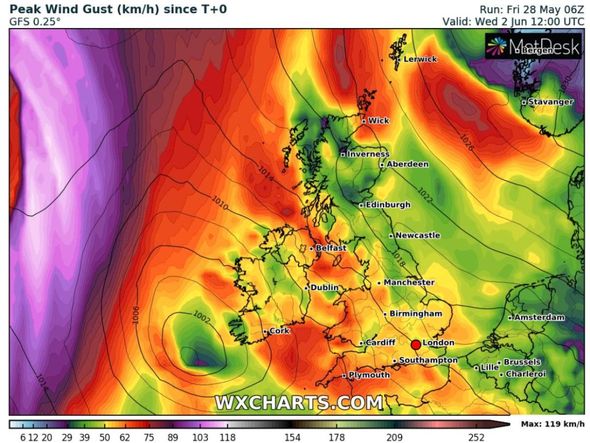 “There could be changes from the south west after midweek with heavy showers threatening but for now, let’s reflect on a sunny warm forecast for a Bank Holiday weekend and find something to wear.”

The BBC’s weather forecast for next week suggested the hot air could arrive from Africa or the Mediterranean.

The forecast between Monday, May 31, and Sunday, June, 6, said: “Our best bet to get warmer, more summer-like temperatures will be if we can tap into sub-tropical Atlantic or African air.

“To do this, we will need a south-westerly or southerly wind. 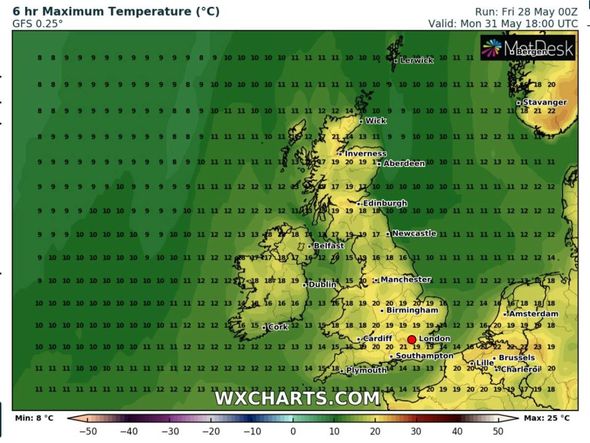 “The main alternate scenario for early June is that high pressure from the bank holiday weekend builds strongly into Scandinavia instead of shifting into Russia.

“This is a mostly drier pattern, but with high pressure to the east the winds would instead shift to southerly and allow us to tap into warmer African and Mediterranean air.”

The Met Office’s monthly forecast added temperatures should be “above average” but potentially interrupted by occasional thunderstorms.

The long-range forecast between Tuesday, June 1, and Thursday, June 10, said “An anticyclonic pattern will continue to bring warm, settled conditions across many areas during next week.

“Whilst there is still likely to be a good deal of dry weather for the first week of June, showers, which could be heavy and possibly thundery, and prolonged spells of rain become more likely across the south and west from midweek onwards. Temperatures most likely remaining around or above average.”