As Monday morning rolls in, heavy rainfall is set to soak northwestern Scotland, northwestern England and Wales with a yellow warning issued by the Met Office until 8am. But Tuesday could see some snow due to freezing temperatures overnight. Met Office forecaster Marco Petagna said: “Following turbulent Storm Aiden and remnants of Hurricane Zeta, a chilly north-westerly airstream will become established. Snow could be seen on Tuesday in the north on hills above 400 to 500 metres.”

The Weather Outlook forecaster Brian Gaze added the cool weather could last throughout the week, with Britain expecting temperatures as low as -3C (26.6F) on Thursday as a 1000 meter “Greenland cold bubble” passes through the north.

He added: “It look like it looks like a frosty Bonfire Night, which would be a big change after many mild ones in recent years.

“Southern Britain could see below 0C.”

WXCharts also predicts that Edinburgh and north London could see some light snowfall tomorrow night, with London seeing a gentle fall of less than 5cm per hour into midday. 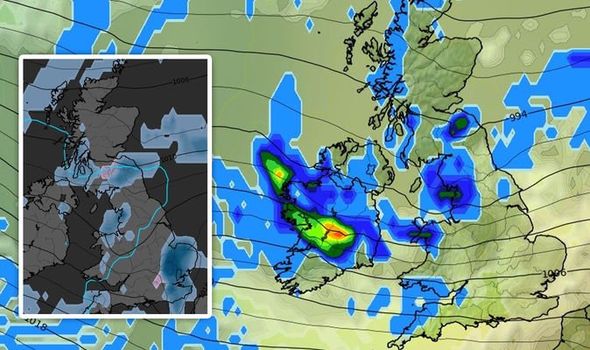 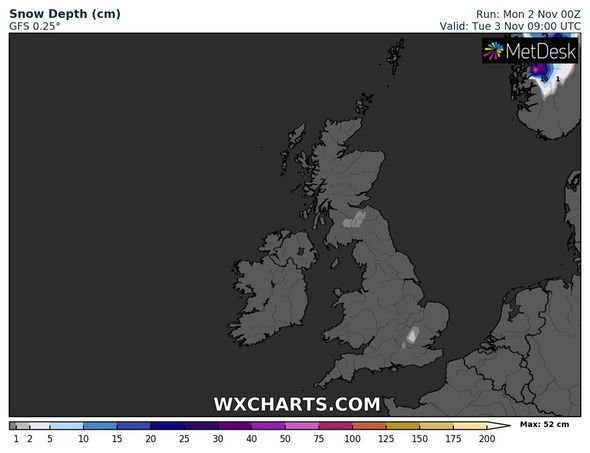 On Monday however Luke Miall, Met Office meteorologist, said the start of the week will be a colder day for many, with showers at first for much of the UK before the weather begins to clear.

He added: “It’s going to be an exceptionally mild before we get (to midweek temperatures), particularly across the south with further rain spilling southwards overnight. We have got warnings in place, and gusts could reach 75mph across Northwest Scotland.

“But temperatures will rise through the night, so by the morning, we’re looking at 16C (60.8F) to 17C (62.6F) across the southeast. Could be record breaking. Now as that rain clear south east England through Monday morning we see the cold air spilling into all areas so then temperatures through the day will come down despite that sunshine.

“Showers out towards western areas will push their way in on a brisk breeze turning more persistent perhaps across northern England and north Wales at times but as you can see temperatures coming down throughout the afternoon to 14C (57.2F).” 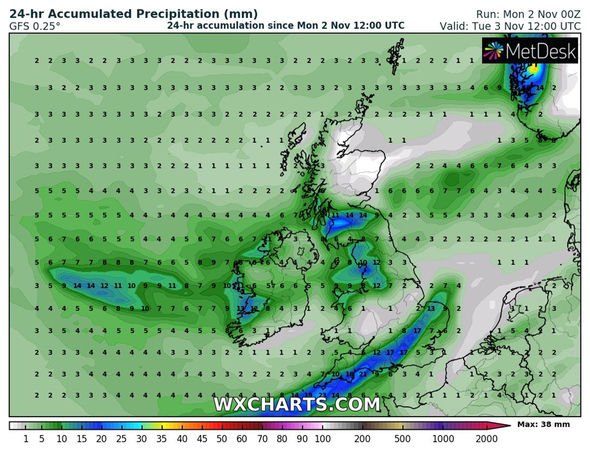 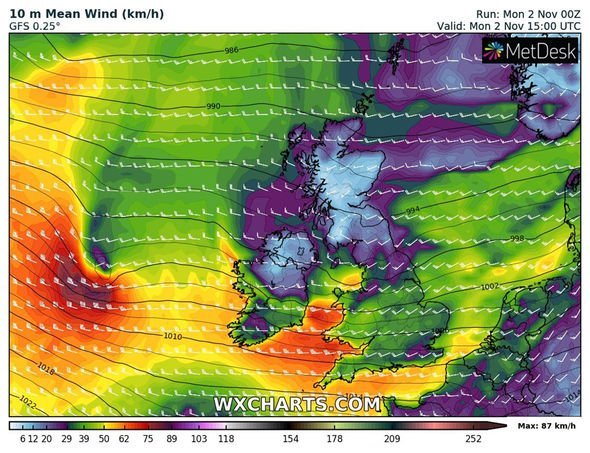 Heading into 9am, conditions will begin to improve for the UK after a wet night.

The yellow warnings for the northwest is set to clear up by around 8am according to the Met Office, with intermittent rainfall coming in patches across the county.

By mid-morning, up to 4mm of rain an hour will be felt in Kendall, with Dumfries and Glasgow also seeing some lighter rain continue into the later hours.

Wind speeds for the morning will be light for much of the country, with the heaviest felt in Brighton at 31mph.

But due to the colder and faster winds in that region it will feel closer to 10C (50F) along the Kent coastline, with it getting colder by the middle of the day with a drop to an actual temperature of 14C (57.2F).

It will be much cooler throughout the rest of the UK, with the northeast still battling the wet conditions at a temperature of 9C (48.2F) by 12pm.

Northern Ireland is set to be the coldest region of the UK today, with 8C (46.4F) in Londonderry by midday. 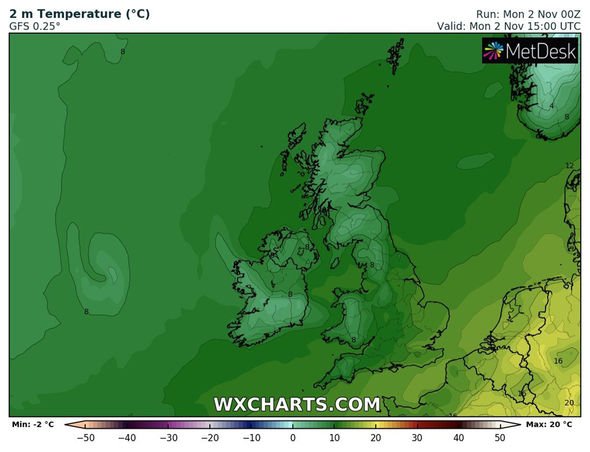 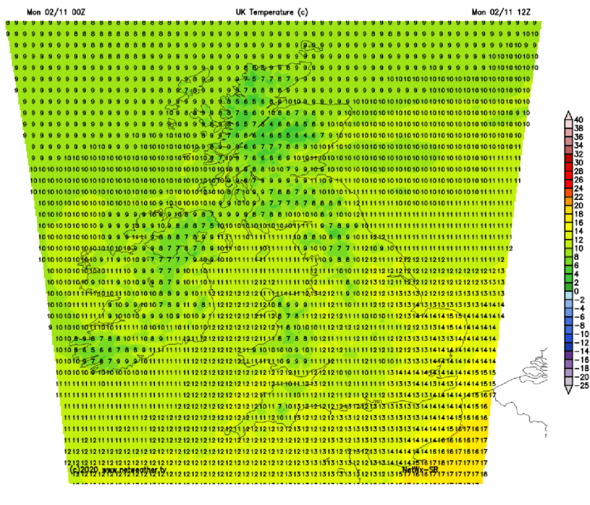 Heading into the evening and conditions are set to worsen in the southwest and northwest of England, along with parts of Scotland.

Downpours of up to 8mm of rain an hour will drop onto Cornwall and the central Scotland belt by midnight.

Lighter rains will be felt across the north east, with 4mm of rain per hour in Newcastle and parts of Scotland like Dumfries and Edinburgh.

As Tuesday begins, rainfall will stay relatively localised in the south west, with Cardiff also getting drenched with the southerly rain cloud, but Scotland’s downpour will begin moving westwards as it eases by 3am.

As the early morning rolls in however a chance of snow is predicted for those in the north east and some parts of London.