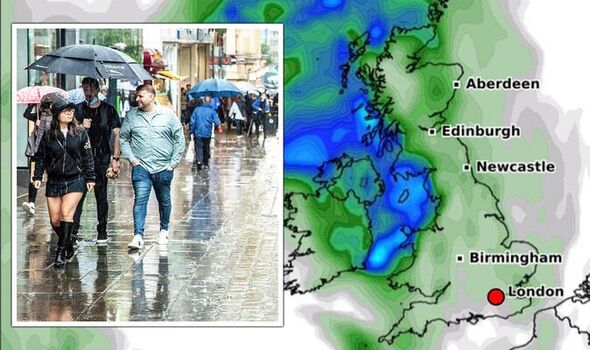 May is shaping up to be equally chaotic with forecasting systems threatening another Arctic cold snap through the start of the month. Scotland stands to see the best of any golden rays tomorrow while elsewhere will shiver under a gloomy shroud of grey.

Temperatures will range from around 12C to almost 20C across the length of the UK as quarreling weather systems straddle the nation.

Met Office meteorologist Alex Deakin said: “Generally, it looks pretty cloudy on bank holiday Monday, and it’s hard to pin down where we will see any sunshine and there will be a few showers around.

“Temperatures will be on the way back up if we do see some sunshine.

“On Monday we are betwixt and between weather systems and it depends where you get the cloud or the sunshine as to the type of weather you will have on bank holiday Monday.”

After a blast of golden rays yesterday teased the promise of a glorious weekend, forecasters warn things will go downhill for many today.

Showers and overcast skies will dampen spirits across England and Wales while Scotland clings onto the sunshine.

Mr Deakin said: “There will be more cloud on Sunday with more showers, and Sunday will be a cloudier day for England and Wales.

“It will be showery and quite damp across a good part of England and Wales.

“It will be a warmer day for Scotland particularly if we get some sunshine poking through.

“England and Wales, with more cloud, won’t be as warm.”

Temperatures in northern Britain could lift into the high teens while it will be cooler further south, he added.

Forecasters are still anxiously watching weather models for a cold snap threatening to send thermometers plummeting through the start of this month.

Some outlooks suggest a chilling blast from the Arctic will plunge the nation into a pre-summer cold snap.

He said: “Winds will continue to come from a cooler northern source.

“Indeed, later next week, there is an outside chance that we may well endure a fresh wave of Arctic air, raising the possibility of unwelcome overnight frost, especially across northern areas.”

It is not until next weekend when a ‘significant’ change in the weather could bring something more seasonable, he said.

Low pressure from the Atlantic will also bring much-needed rainfall after an unusually dry April, he added.

He said: “There are tentative signs that by next weekend, our dry high pressure area may begin to shift.

“The timing of this change is still not clear, though, and it could well take until the following week for a significant change.”

Chilly winds will start to bring a northerly chill across Scotland tomorrow, according to Netweather’s Nick Finnis.

He said: “Bank Holiday Monday is looking generally rather cloudy, with scattered showers developing in places, many will stay dry through.

“Where the sun does appear, it will feel pleasantly warm in the generally light winds.

“It will be cool in the far north with a northerly wind.”

Jim Dale, meteorologist for British Weather Services and author of Weather or Not? warned sun-hungry Brits not to hold out for a bank-holiday heatwave.

He said: “For the most part, the bank holiday is going to be fair to middling.

“We are not going to see a heatwave, and there will be some rain around on Sunday particularly and these will be more to the west of the country than the east.

“The down day will be Sunday, and it will get better for Monday when it will be mostly dry.”