Heavy downpours could lead to flooding in some regions of Britain, causing travel disruption. According to the Met Office, deep or fast-flowing floodwaters in some areas of the country could pose a danger to life.

The Met Office warning reads: “Periods of heavy rain are expected to develop across Wales and northwest England during Thursday and Friday.

“The heaviest rainfall, however, is expected to be across the hills and mountains of northwest Wales where four to 5.1 inches (100mm to 130mm) of rainfall is possible by the end of Friday.”

The regions affected by the new weather warnings are located across north-west England, Yorkshire and number and Wales. 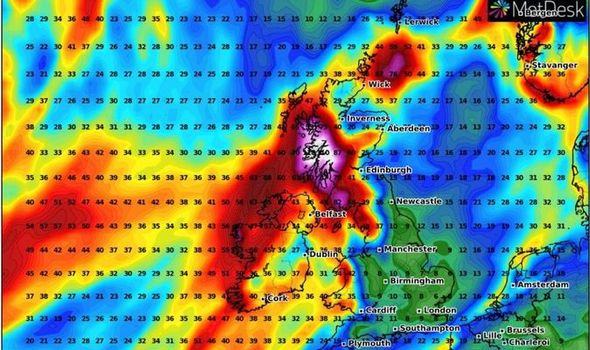 The new forecast comes after the National Hurricane Centre (NHC) has said although Hurricane Epsilon has now been declared a “post-tropical cyclone”, it still remains a “very powerful and dangerous storm” until it is absorbed by another “large extratropical low pressure system over the north-eastern Atlantic”.

“Breezy with showers on and off rain or longer spells of wet weather as Atlantic weather fronts move through and there will be plenty of atlantic weather coming our way.”

He added: “Temperatures are going to be falling away two to six degrees generally, perhaps close to freezing in northeast Scotland with lighter winds here by the end of the night. 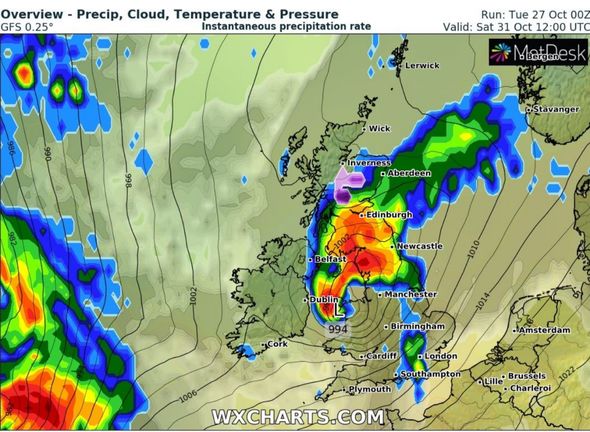 “But another weather front is moving in and that’s going to bring a wet start to western Britain and then that crossing the country during Tuesday.

“It’s attached to this large area of low pressure which will dominate proceedings over the next couple of days.

“So a wet start to the day for northern Ireland, western Scotland, central and western England, as well as Wales. A breezy start as well.”

However, the wind will shift towards the east, with 6 to eight hours of rainfall also forecasted for many places. 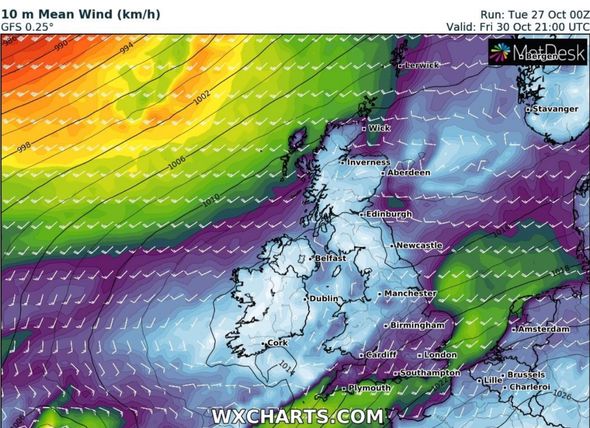 During the afternoon, however, rainfall will be decreasing in northern England but becoming heavier in Scotland.

Tuesday night will be windy in the southeast as well as the northeast with the downpours becoming heavier for some areas in Scotland.

In its long range forecast, the Met Office said: “Conditions are expected to remain unsettled into the beginning of November, with outbreaks of rain at first, followed by a more showery regime.

“Strong winds are also likely to continue for the first few days of November, with gales possible at times. 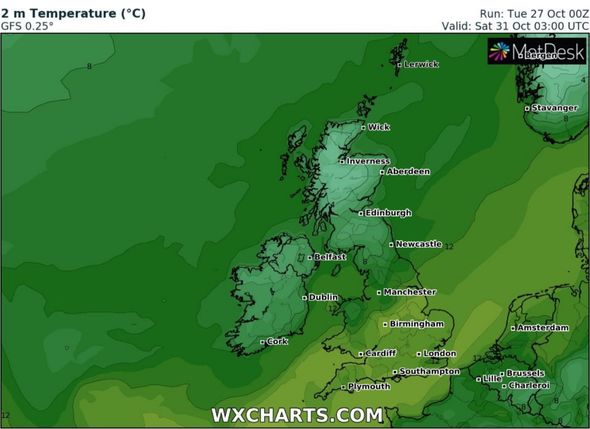 “However, it will likely feel milder, particularly in the south.

“A change to more settled conditions is then expected midway through this period with any showers or longer spells of rain most likely affecting northern areas.

“Elsewhere, the south of the UK has an increased likelihood of seeing the best of this dry and settled weather.

“Winds possibly becoming light across the south with the strongest winds confined to the north.