The UK has been battered with widespread thunderstorms and torrential rain this week, with this May on course to becoming one of the wettest on record. But Brian Gaze, a forecaster at Weather Outlook, said temperatures are soon set to feel “significantly warmer” as high pressure starts to build from a westerly direction next week. He also shared his latest weather models that showed sizzling shades of red and orange sweeping upwards over the UK between Wednesday May 26, and Friday May 28.

He added this high pressure could be edging closer to the UK “sooner than expected”.

He also told Express.co.uk: “The unseasonable weather looks set to continue this week with showers, downpours and longer spells of rain at times.

“There’s also the potential for gales in the south and southwest of the UK this Thursday and Friday. 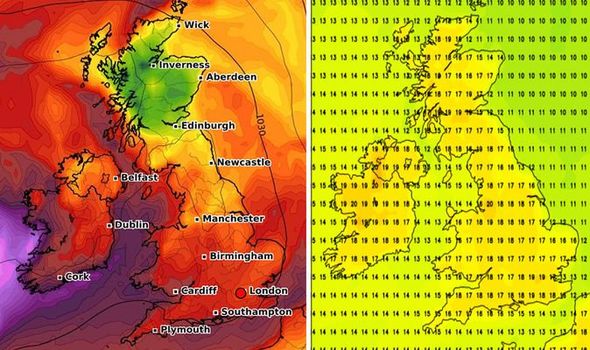 “Next week probably starts cool and showery, but there are growing signs of high pressure building in from the west.

“That could lead to much more settled weather during the second half of next week.

“Because the air trapped under the high pressure will be quite cool, temperatures won’t be anything special for the time of the year.

“Nonetheless, with more sun, lighter winds and generally drier conditions, it should feel significantly warmer than it has done recently.” 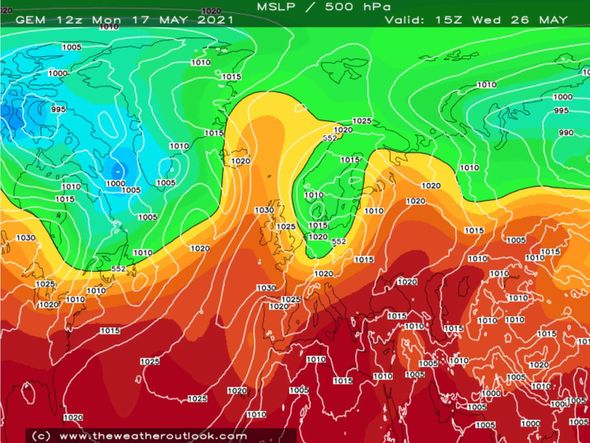 Temperatures could climb back up into the high teens next week as the latest charts from Net Weather show 16C hitting Kent and Dover in the southeast of England on Wednesday, May 26.

Over the weekend and into June, the maps also show warmer air sweeping over southern and eastern areas after weeks of below-average temperatures.

Surrey could see highs of 19C on Sunday, May 30, while London could see 18C and Southampton 17C.

On Wednesday, June 30, temperatures could rise once again to 20C in London, Birmingham, Nottingham and Stoke, according to WXCHARTS. 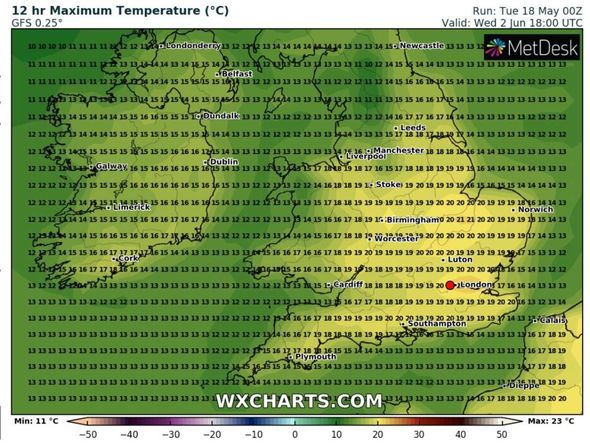 Further north, Leeds and the Yorkshire Dales could also see 17C on the same day.

Mr Gaze’s monthly forecast also predicted “very warm days” to hit the south between May 15 and 31.

He said: “Early on a drier and more settled spell may develop for several days. In the south it could become quite warm.

“Later on a transition back to more changeable weather is favoured. 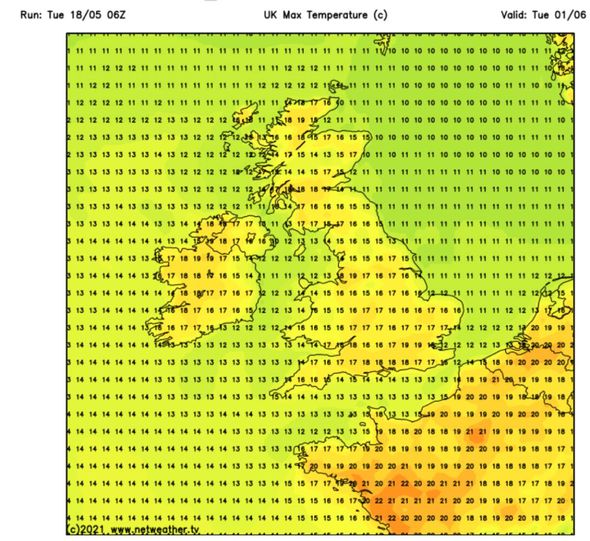 “Rain amounts and temperatures become close to the norm for the second half of May.

“Therefore, some warm or even very warm days are possible.”

The Met Office’s long-range forecast added temperatures could increase by the end of the month as conditions become drier and more settled.

The forecast between Sunday, May 23, and Tuesday, June 1, said: “Unsettled weather continues through the start of the period, with widespread showers. 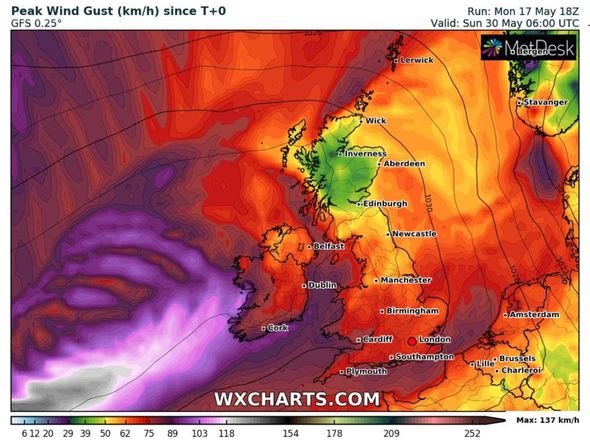 “As next week progresses there is a chance of more settled conditions to gradually become established.

“Rain and showers are likely to clear away to the east, leaving drier and less windy conditions behind by the end of the week.

“Temperatures look likely to remain on the cool side, though feeling pleasant in the sunshine. 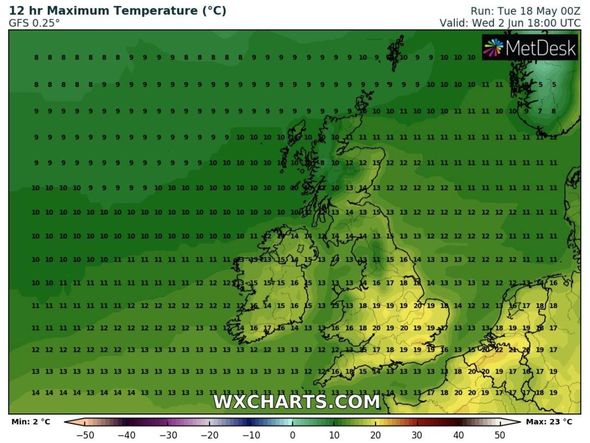 “As we move into the following week, things become more uncertain, but indications suggest a continuation of drier weather with the possibility of temperatures starting to increase slightly.”

Netweather’s monthly forecast for May warned any warm weather could still be interrupted by downpours of rain.

The forecast said: “Remaining unsettled and on the cool side at first, but with probably a brief finer, warmer interval after the weekend. 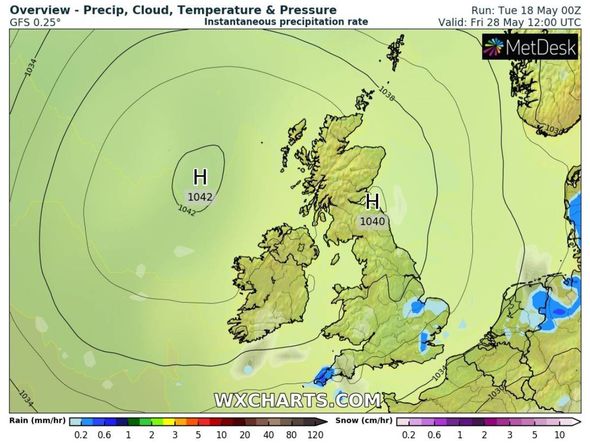 “But in a period probably of much variability, finer spells are likely to be punctuated by showers.

“Some could be heavy with locally severe thunderstorms mostly in the South, bringing the risk of further ‘flash’ flooding.