The UK weather will transform from mostly dry, cloudy and chilly to increasingly windy and rainy as well as bringing a surge in temperatures. Storm Barbara which is set to sweep parts of Portugal and Spain on Wednesday will also bring some rain to Britain.

The Met Office has issued yellow rain warnings for areas in Scotland and Northern Ireland on Tuesday.

Homes and businesses in parts of Scotland could be flooded due to heavy rain.

In Northern Ireland 20-30mm of rainfall is expected to hit the region with some hills and mountains likely to experience 40-60mm.

In Scotland 50-75mm of rainfall is expected over hills and mountains. 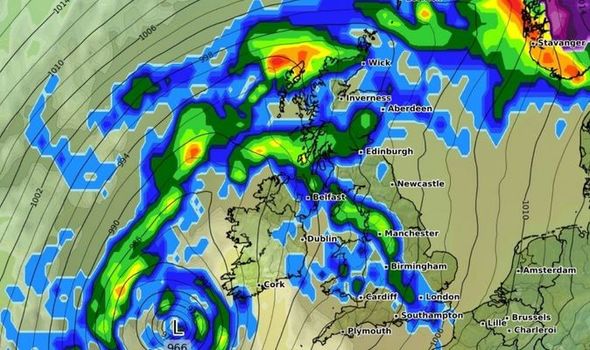 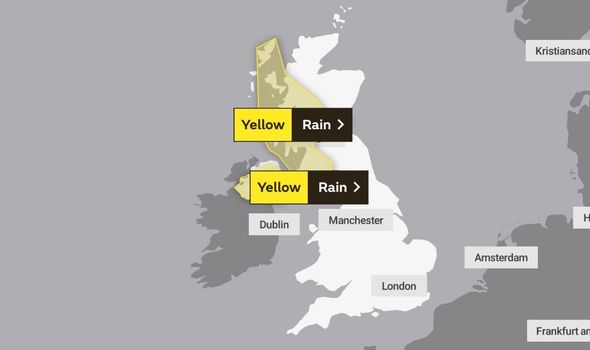 But some isolated spots including Argyll in Scotland could have as much as 75-100mm of rainfall, according to the Met Office.

Met Office Chief Meteorologist, Frank Saunders, said: “Tomorrow a low-pressure system, separate to Storm Barbara, will cross Ireland and Northern Ireland bringing gale or even severe gale force winds to some exposed parts of the west and South West of the UK.

“As we look ahead to the rest of the week, we are expecting rain or showers for many areas on Wednesday, possibly heavy and blustery in the South East.

“It will be quieter on Thursday but more unsettled from Friday, with spells of wet and windy weather moving in from the west.” 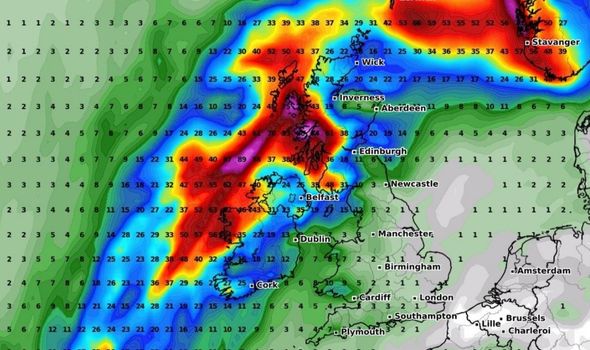 A Spanish front is set to bring the UK into some warmer conditions.
Temperatures are expected to reach a mild 18C on Tuesday.

But BBC Breakfast’s Carol Kirkwood told viewers that the warm weather will not last too long due to incoming storms.

She said: “Tomorrow [Tuesday] our weather front moves steadily eastwards eventually clearing, it will be windy particularly in the south-east quarter and particularly on the coast.

“But low pressure is not far away. In between we’re pulling in this south-westerly wind, hence the higher temperatures. 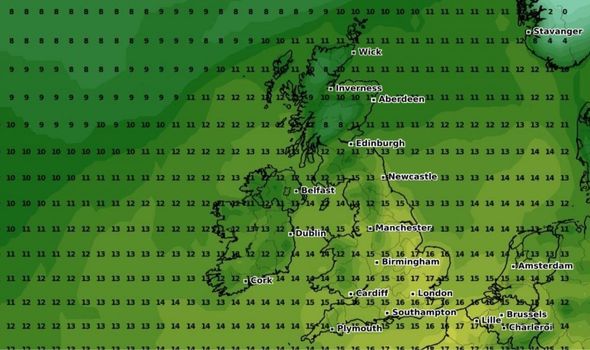 “It’s going to feel milder tomorrow if you’re out of that rain.”

Ms Kirkwood said gusts will bring gale force winds and there will be the odd thunder.

She added: “So we start with rain in the central area, eventually moving to the North Sea.

“It could slow down in the early afternoon.

“We still have the rain in the north of Scotland with gusts to gale force across the northern isles and still some showers coming in to western areas. 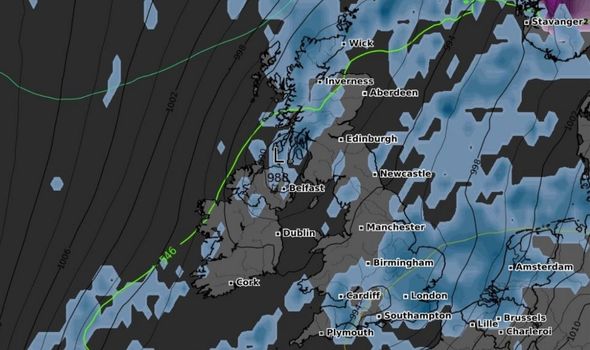 “Some of those will merge to give heavier or persistent rain and also you can hear the odd tumble of thunder.

“But look at the temperatures, 10C in the north to 17C in parts of Manchester, London and Cardiff.”

Rain will continue to hit the UK on Wednesday in parts of the country.

Temperatures will remain mild on Wednesday reaching 15-17C in the south.