Heat is arriving from the Azores this weekend, driving temperatures up to the high teens, and ending an extended period of freezing weather. The mild conditions look set to last for several days, before a chilly front moves in next weekend, according to the latest weather charts.

Weather forecasters predict temperatures could rise to as high as 17C on Sunday for the south east of England, while northern areas are expected to see the mercury rise to the low teens.

New charts from Netweather show the country turn green and yellow as the warm air moves in.

At 6pm on Saturday, the chart shows the south east can expect highs of 13C, while other parts of the country see an average of 10C.

Temperature maps by WXCharts also show the mercury is expected to rise to 13C by Saturday evening. 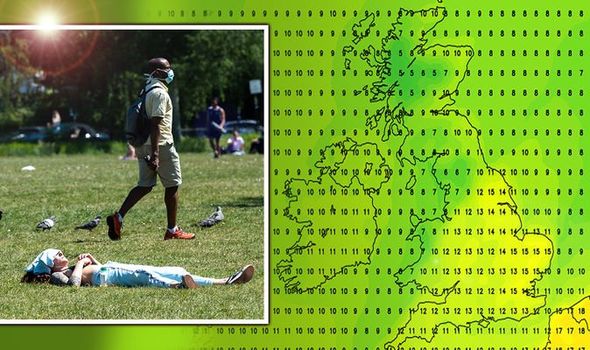 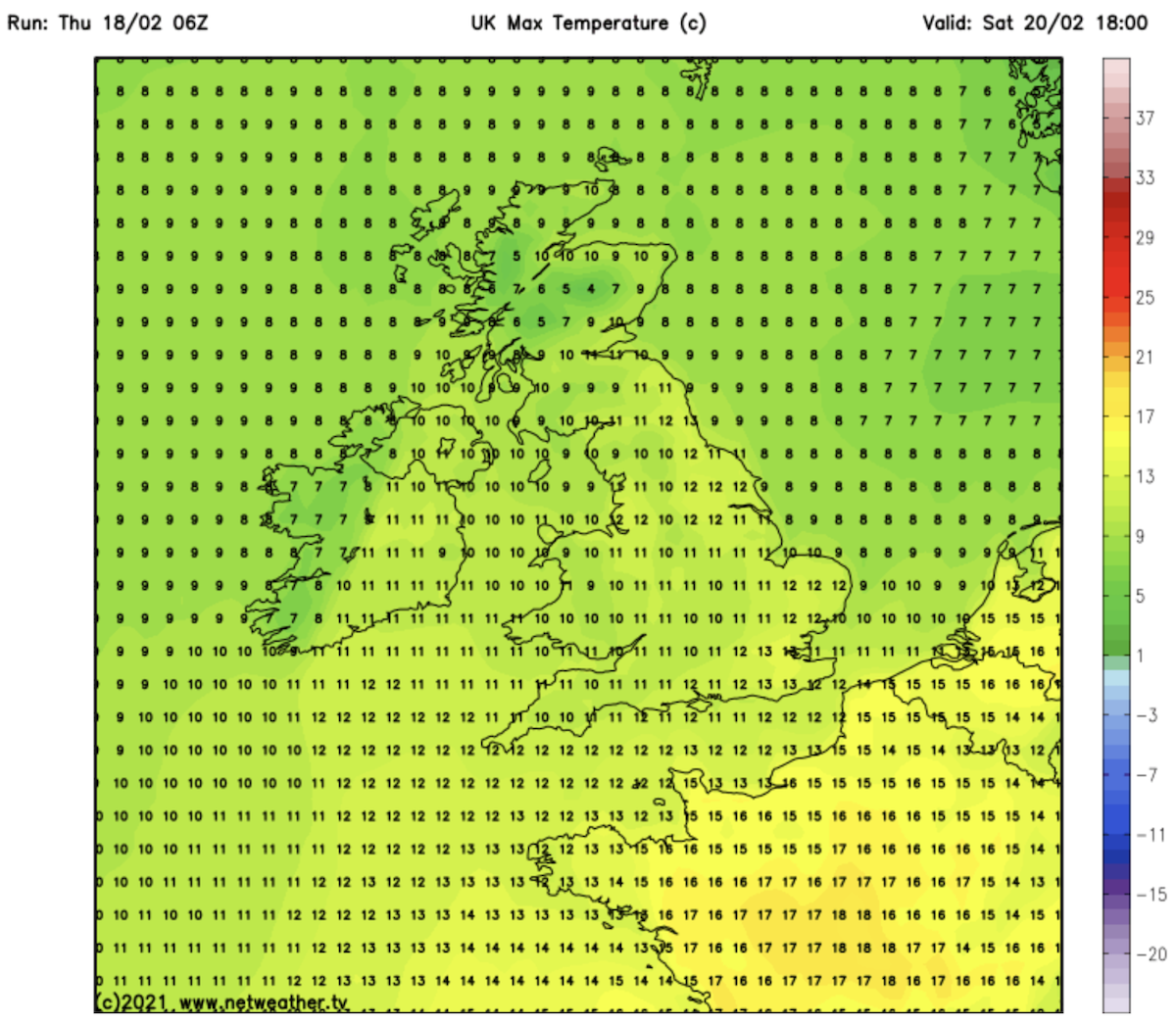 Similar temperatures are forecast for Sunday afternoon, with highs of 14C forecast for the east of England at 3pm.

Met Office meteorologist Aidan McGivern said temperatures could peak at 17C this weekend, as a warm breeze moves in from the south west.

He said the forecast for Saturday is: “A mild day with a strong or even gale force south westerly breeze. 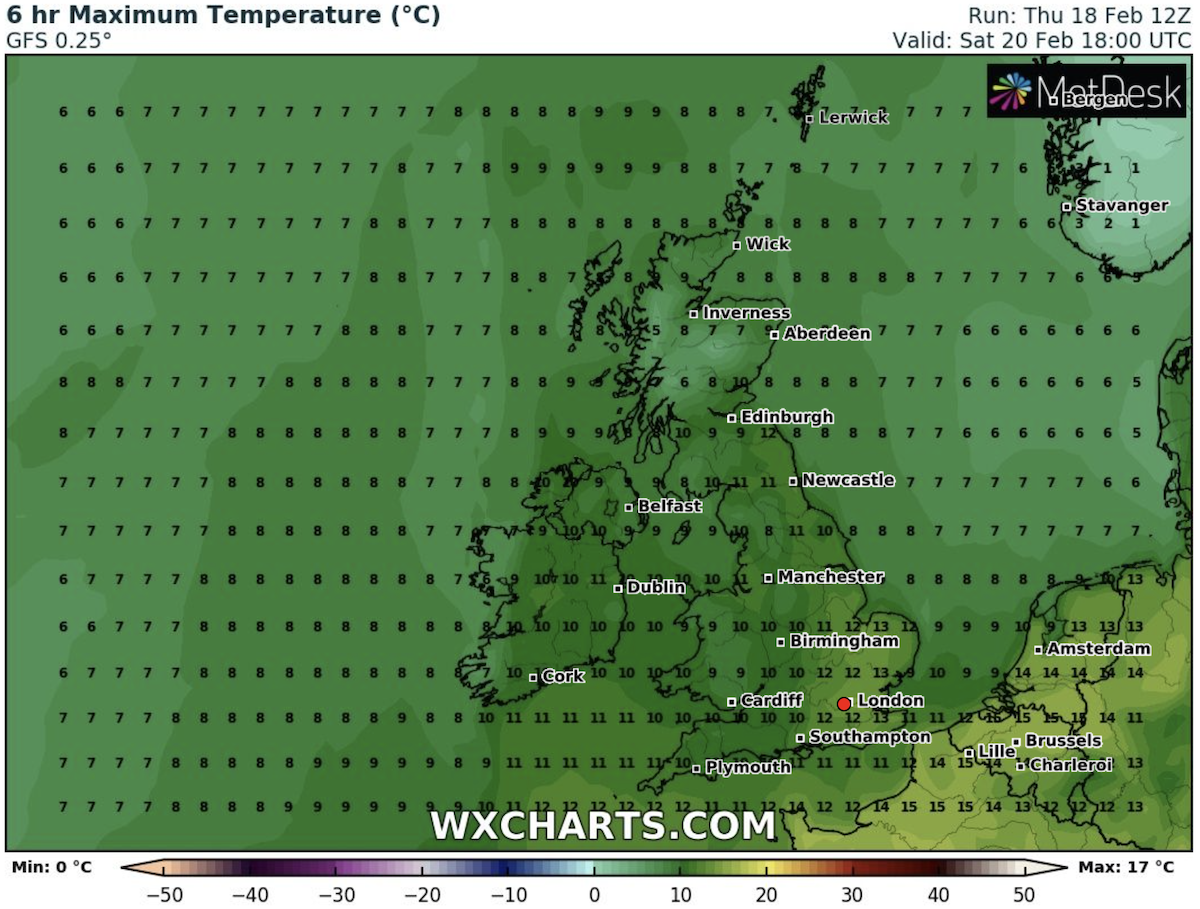 By Sunday the forecaster said there is a better chance of sunshine, with the milder temperatures expected to persist.

Mr McGivern expects the mild conditions to persist through the beginning of the week.

He said: “Monday is looking largely fine, certainly at first. Sunny spells and another mild day.” 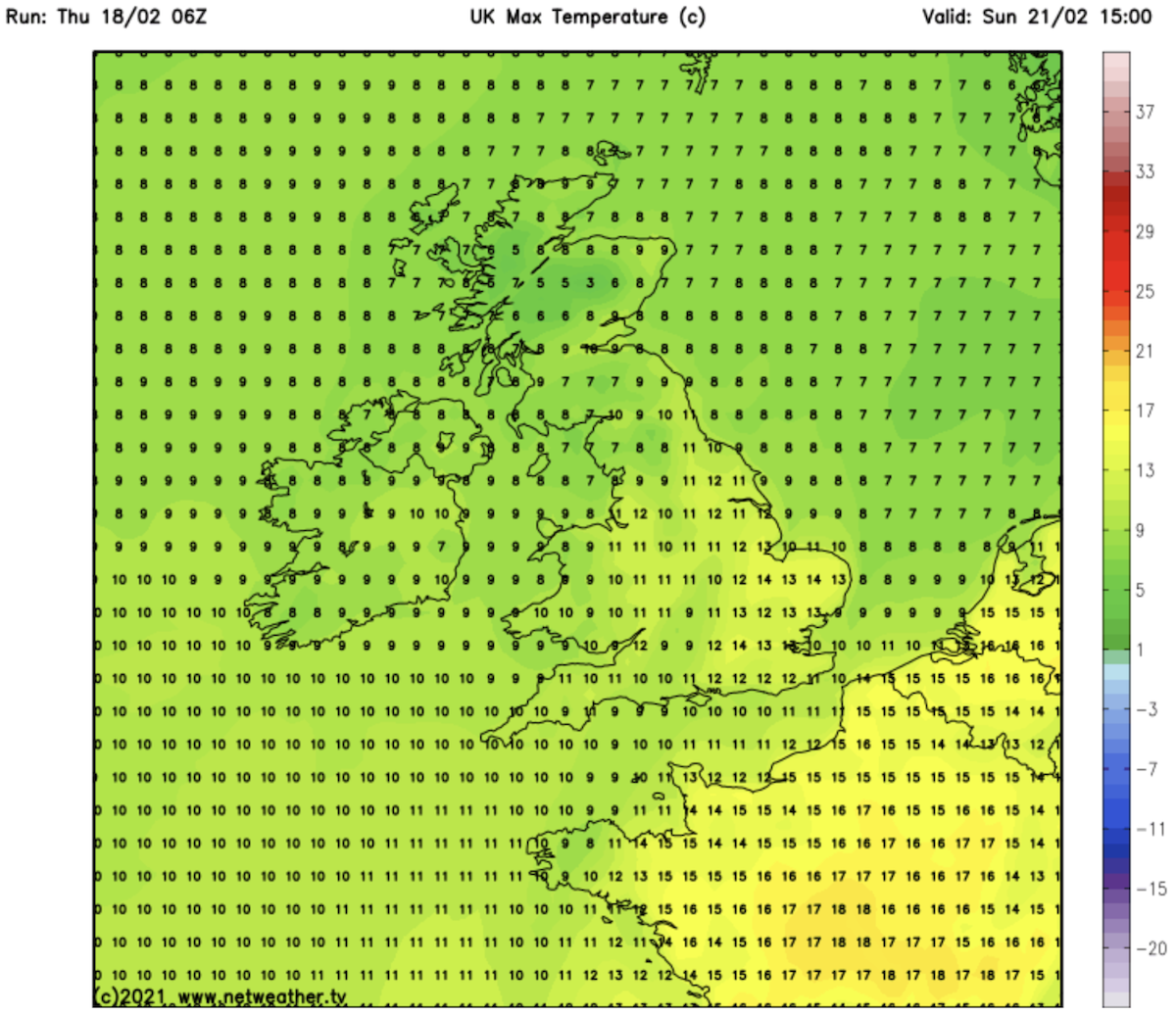 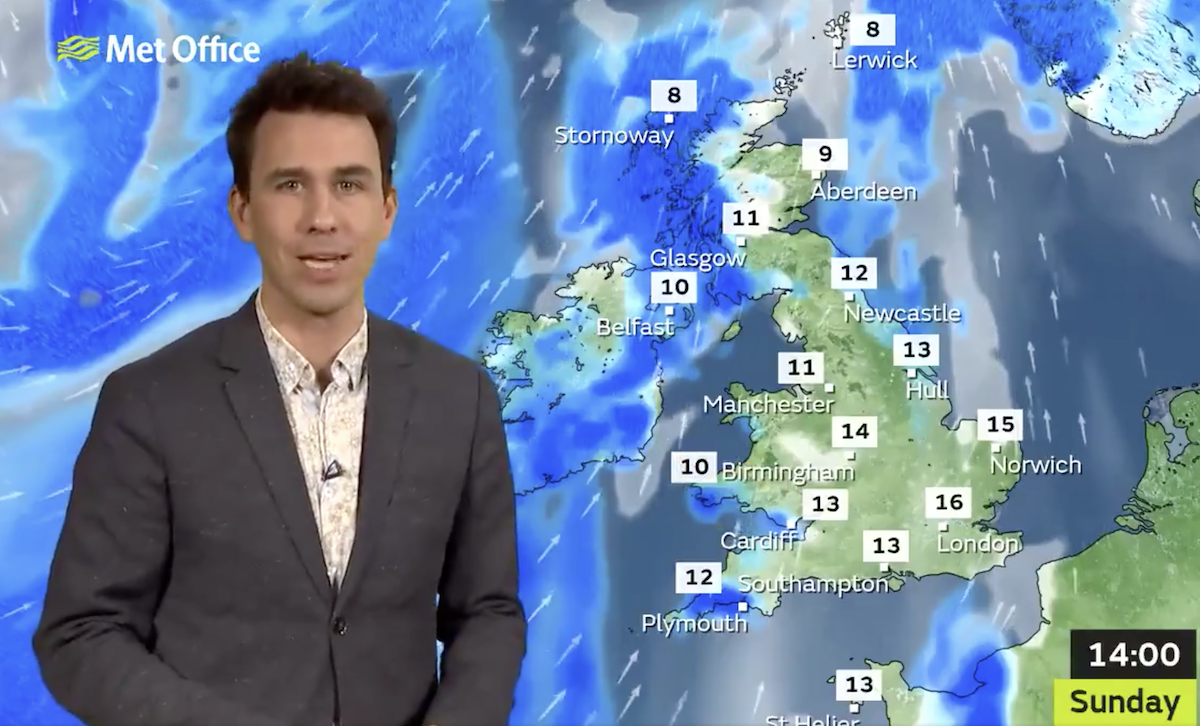 BBC forecasters credit the warmer conditions to a plume of sub-tropical air coming in from the Azores.

They said: “A milder, wetter pattern persisting. After a bitterly cold start to February, the second half of the month is shaping up to be noticeably milder throughout the country.

“For the rest of this week, high pressure will stay well to the east and south.

“This will allow Atlantic weather systems to move into the UK, mostly from the southwest and drag milder sub-tropical air over us from the Azores.” 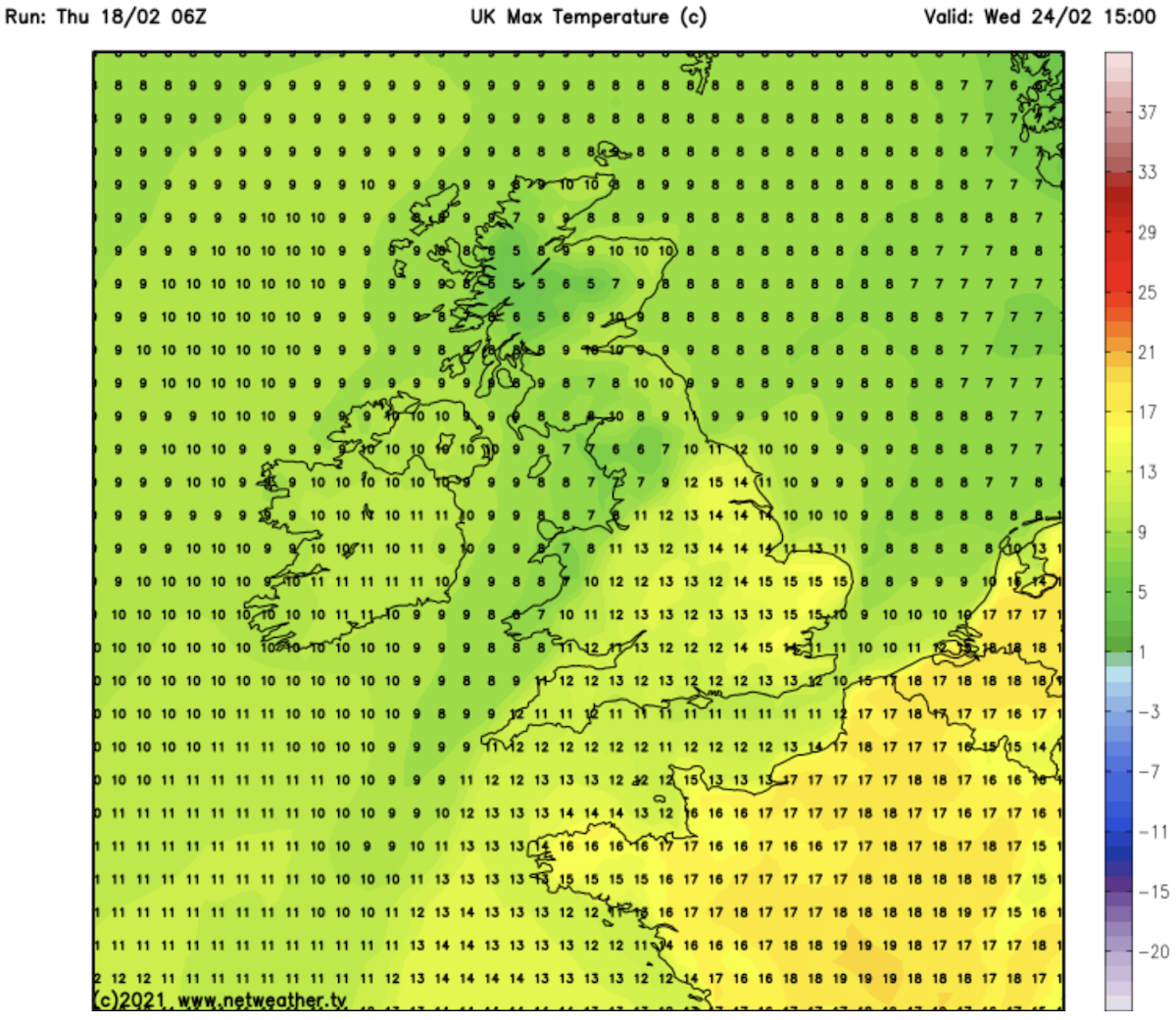 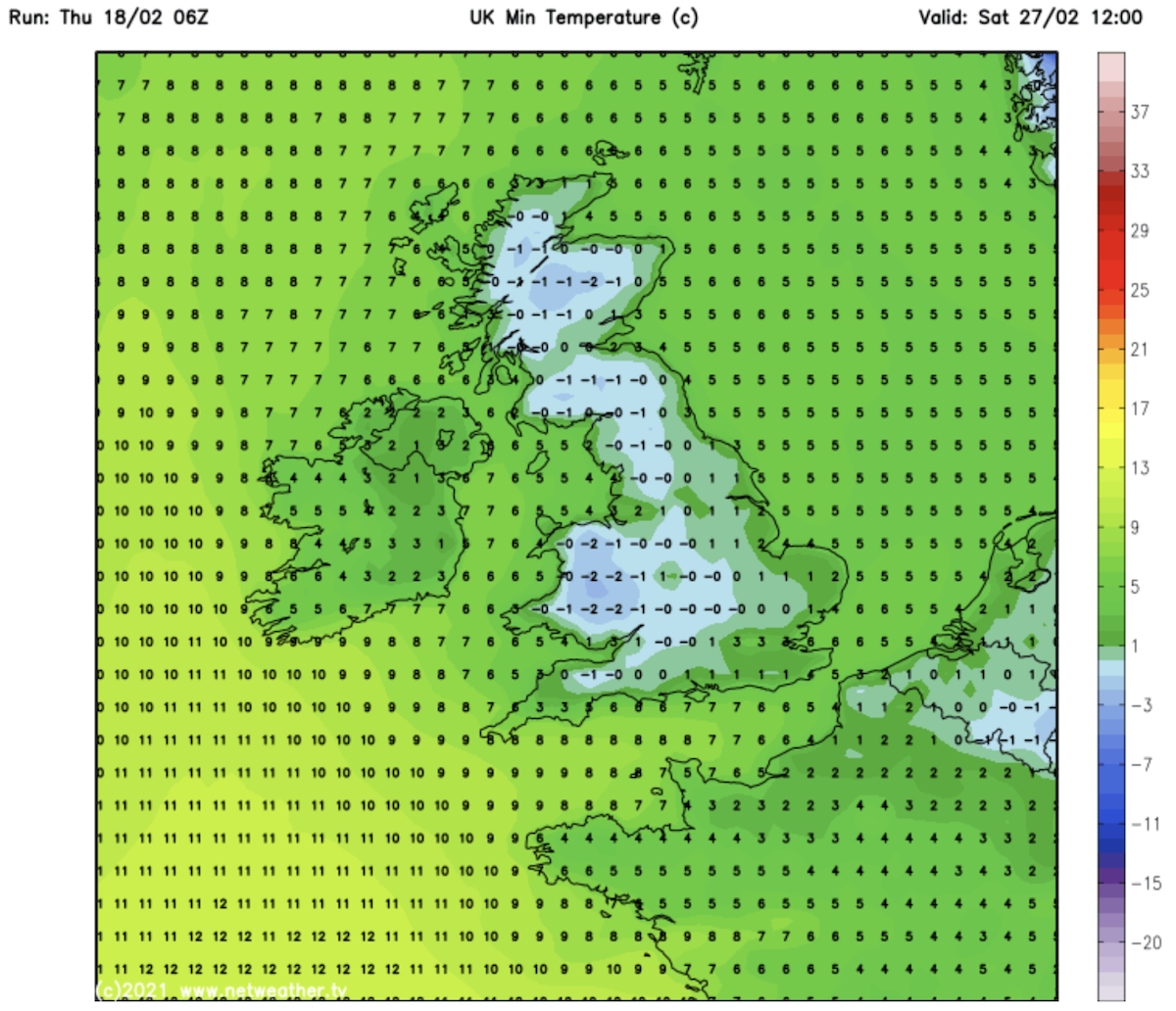 Netweather temperature charts show the warm conditions will persist until Thursday evening, when the mercury starts to dip to single digits.

Wednesday afternoon is set to be particularly warm, with highs of 15C forecast along the east coast of the UK.

At 12pm on Saturday February 27, the mercury is set to dip to -2C in parts of Scotland and Wales, with temperatures battling to rise about 3C in other parts of the UK.