A frontal system moving northeast off the Atlantic across the north and far west on Monday will transfer winds, clouds and some sporadic downpours northeastward across Scotland, NW England, Northern Ireland, north and west Wales through Monday. East Wales, central, southern and eastern England will be dry and warm with sunny spells with temperatures reaching highs of 20-23C inland.

North and far west is set to see some clouds and downpours, with temperatures of 15-18C.

Tuesday and Wednesday will see low pressure to the northwest and high pressure towards the east.

Nick Finnis at NetWeather said: “A wriggling slow-moving cold front lying southwest to northeast across Ireland and Scotland, marking the boundary between cooler and fresher Atlantic air to the west of the front and increasingly warm and humid air to the east across England and Wales, pumping in off a hot near continent.

“The frontal boundary across the north and far west will bring cloudy skies across Scotland, the far north of England, Ireland and north Wales, with pulses of rain, heavy and perhaps thundery at times, moving northeast – particularly across western Scotland and N. Ireland.” 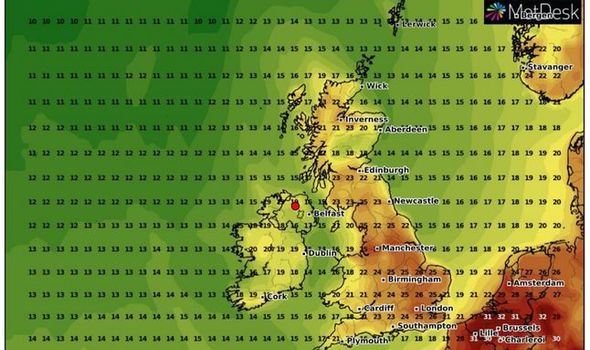 However, large regions of England and Wales will see a sunny and warm mid-week.

Some inland areas in central and eastern England could reach 30-31C on Wednesday.

Thursday is, according to Mr Finnis “shaping up to be another very warm or hot sunny day for much of England and Wales, temperatures widely in the mid to high twenties Celsius, perhaps 30C again in the east.

“Scotland and N. Ireland cloudier and cooler with some showers in places.” 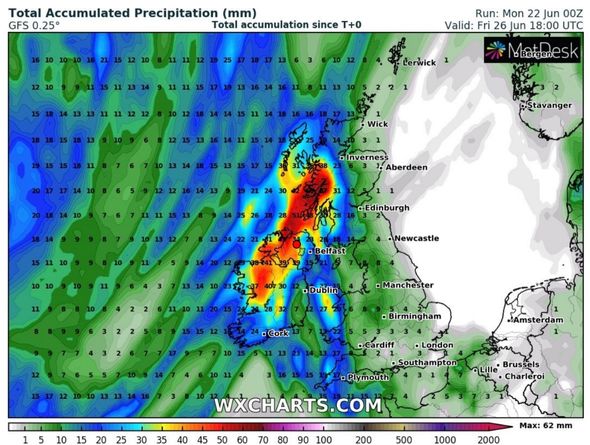 “Weather models are currently indicating that hot settled weather will start to break down from the west on Friday.

But it is unclear when exactly this change will happen.

“There’s some uncertainty over timing, but heavy showers or thunderstorms breaking out across initially across the west either late Thursday before developing further east into Friday,” Mr Finnis added. 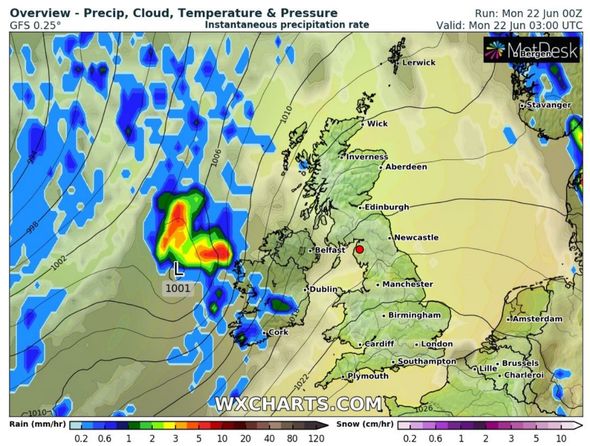 The Met Office expects this week to swelter in the warm weather and abundant sunshine.

Deputy chief meteorologist Martin Young said: “By the middle of next week we’ll see temperatures across much of England and Wales widely climbing into the mid to high 20s Celsius and it will probably be hot in parts of southern and eastern England, as temperatures peak close to 30C.

“It’s possible Northern Ireland and Scotland will join the rest of the country in seeing a spell of warmer weather later next week, as this hot air from the continent extends northwards across the UK.”

“We’re keeping a close eye on the possibility of severe thunderstorms developing later next week too, triggered by the warm continental air.” 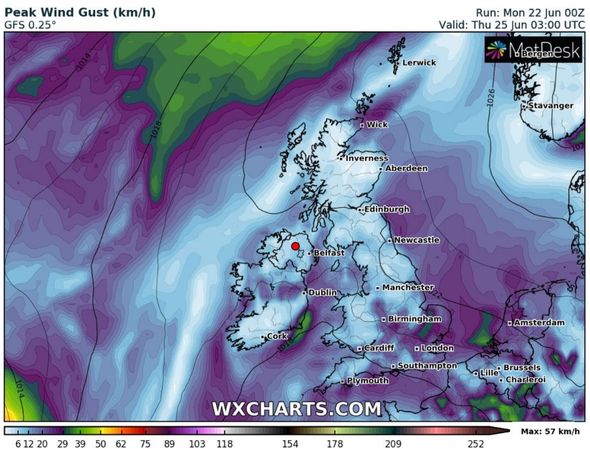 Paul Michaelwaite at Net Weather said on Sunday: “The change will begin to occur early next week, as low pressure to the west of the British Isles and high pressure to the east combine to draw up much warmer air from the continent.

“The warmth will spread north quite speedily from Tuesday onwards, but the far northwest of the UK will have to wait for the longest to see it and ultimately is likely to be the first to see it end as well.

But it is not clear yet how long the hot weather could last.

“The longevity of the fine, hot spell is quite uncertain at this point; it looks set to last until at least the end of the week, although by this stage some thundery downpours are possible in places,” said Mr Michaelwaite.

“Into next weekend is when the breakdown looks likeliest to occur (right now), as cooler, less settled weather spreads down from the northwest, perhaps preceded by thunderstorms – but this is a long way off.”