Tuesday will have a chilly start, but will soon heat up as the morning mists clear away, leaving skies sunny throughout the day across most of the UK just in time for the school summer holidays to begin. Tuesday is set to start with some chill in the air first thing in the morning, with temperatures in the single digits.

But as morning mists clear away, leaving skies largely sunny throughout the day across most of the country.

Met Office chief meteorologist Dan Suri said: “Northern Ireland and Scotland will be under a band of cloud and rain on Monday and Tuesday.

“However, it’ll be dry elsewhere with plenty of warm sunshine and temperatures reaching 28C or 29C in a few spots on Tuesday.

“Temperatures will continue to climb through the week with a hot spell developing across much of England and Wales. 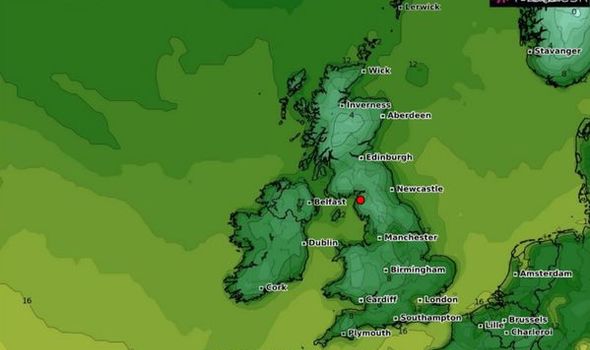 “From Wednesday temperatures will widely reach into the high twenties Celsius and it’ll be hot across much of the UK, especially central and southern England where we could see highs of 30C to 34C.

“This hot weather is expected to last until at least Friday and so heatwave conditions are likely to develop for some areas this week.”

The long-range forecast shows that while parts of England bask in baking heat, the north of the UK, especially Scotland and Northern Ireland, are set for intermittent showers, breezy winds and cooler temperatures next week.

The Met Office forecasted a likely more settled weather towards the end of July, especially across the south. However, atypical wet and windy conditions are likely to come back from the northwest. 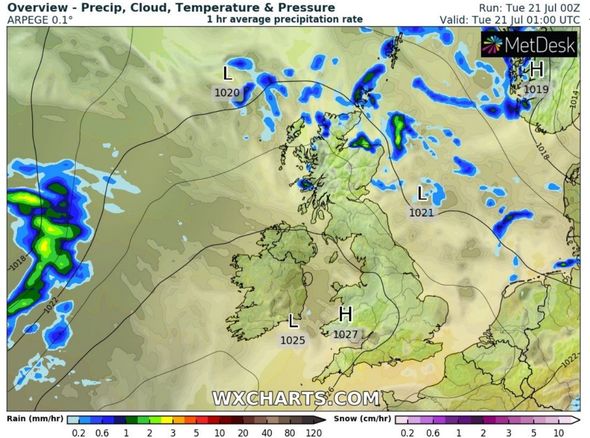 Average temperatures will be paired with warm spells potentially in the south.

Netweather forecasters concurred that rain bands will travel across the UK at times, hefty in the west, but largely unsubstantial in the south and east of England.

Among the rain belts, there will be some lighter, showery weather, with the most showers in the north and east of the country. The showers could bring thunder in some regions, most likely the eastern parts of England.

During the first week of August, the sunshine is set to remain in the south due to high pressure moving in. 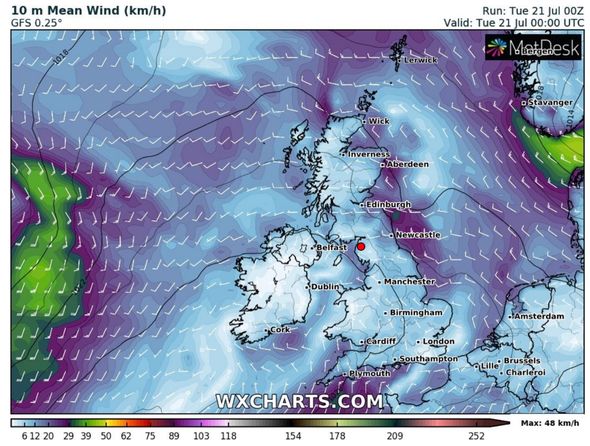 Netweather added that a dry sunny spell is expected in the south early this week with high pressure coming into the south for a while, but confidence is lower.

Temperatures will overall not be far from average but it will likely turn quite hot for a time around midweek, particularly in the southeast.

They added: “Mean temperatures will mostly be around the normal for the time of year, but probably about 1C above in the east of England. 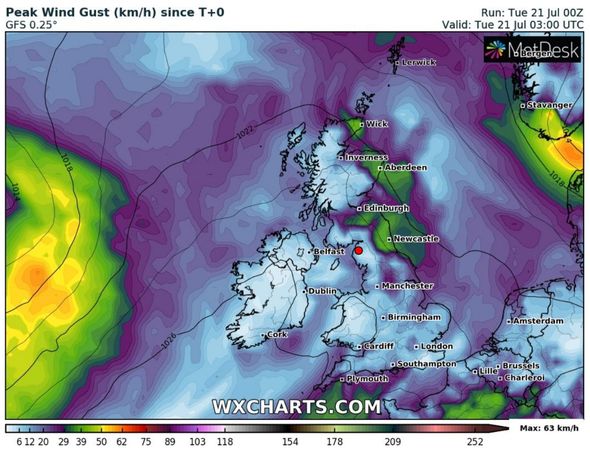 Precipitation and sunshine overall is most likely to be near average for most, but again in the south and especially southeast it may stay drier than usual.

BBC Weather forecaster Tomasz Schafernaker predicted hot and dry weather for most of Europe over the coming days.

The hottest day of 2020 so far was on May 20 when temperatures hit 28.2C at Santon Downham in Suffolk.

The temperatures on that day beat the record set from the day before when St James’s Park in London recorded a high of 26.2C.