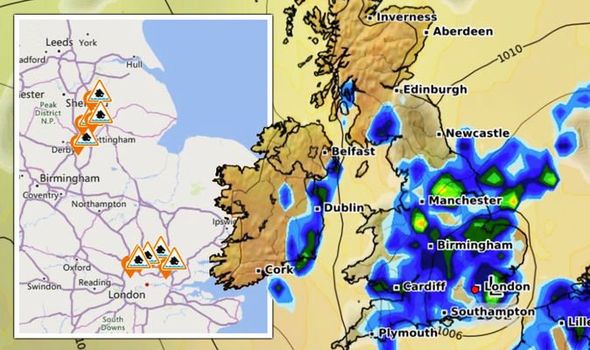 According to the Environment Agency, SEPA and Natural Resources Wales, thunderstorms as well as locally intense rainfall, will hit London from around 1pm and into the evening on Wednesday 21 July. Other areas likely to be hit by a deluge of rain are Silk Stream and the Deans, Edgware, Dollis, Mutton and Wealdstone Brooks.

Rivers in Hendon, Wembley, Harrow, Wealdstone, Edgware or Stanmore areas are expected to overflow. Friday looks to the worst day of flooding as low-lying land, roads and riverside gardens will be drowned. Surface water flooding may also affect these areas.

The Met Office have said local flooding from rivers in parts of the south and south-east of England are possible this afternoon, and more widely across England and Wales during Thursday but not until Friday for Wales. Surface water flooding may also affect these areas.

If you are nearby it is a good idea to monitor local water levels and weather conditions.

It is recommended that you avoid walking, cycling or driving through flood water.

Rivers are currently being checked for blockages which may worsen flooding issues.

Get the latest three-day weather forecast where you live. Find out by adding your postcode or visit InYourArea

A teenager was found in a canal and a man died in the sea as the UK sweltered through its hottest day of the year yesterday.

The 15-year-old was swimming in Stocking Lane in Knottingley, West Yorkshire, at 5.28pm on Tuesday.

Police have issued warnings about swimming in open water to combat the heat.

13:38 Heatwave expected to continue this week

The heatwave which has baked UK over the last few days is set to continue on Wednesday, with scattered thunderstorms forecast to return.

The Met Office says the mercury is expected to push 30C (86F) across southern and western England and 25C (77F) in Belfast, with temperatures forecast to be slightly cooler in the east.