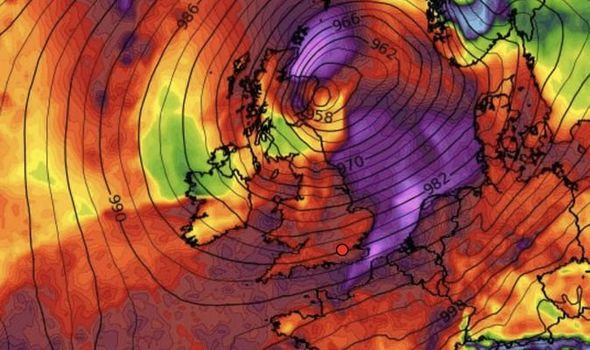 The churning low-pressure vortex will deepen rapidly as it crosses the country early on Thursday and  shows signs of going through ‘explosive cyclogenesis’, otherwise known as a ‘weather bomb’.

Terrifying weather charts show winds hitting 110km/h in parts of the country as the brutal cyclone, named ‘Christoph’ on Monday by the Met Office, hits.

It will tear in from the Atlantic on Wednesday night before crashing across northern Britain and dumping a snow deluge on Scotland on Thursday, a prelude to a return to a wider winter freeze, forecasters warn.

“Winds will reach across northern Britain and all the way down the North Sea coast through Thursday and into Friday morning when it moves off.

“Over northern England we could be looking at blizzard territory, and the winds which could 60 to 70mph will be cold and it will feel very wintry.

“After the storm moves away at the end of the week it will pull cold Arctic down over the UK, the polar front will remain south of the UK making it feel cold again into the weekend.” 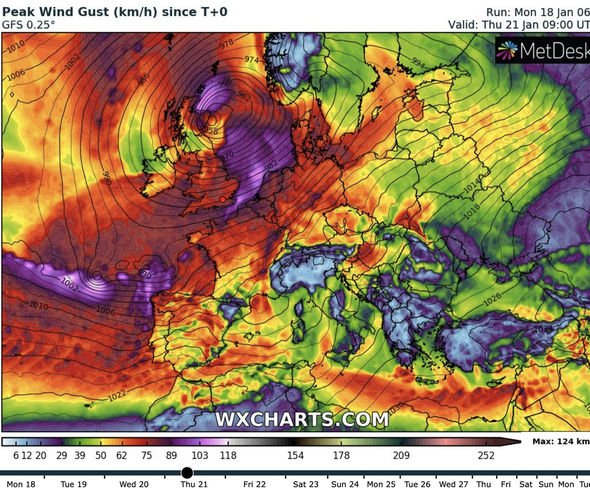 Weather pressure charts show the central pressure of the storm plunging from 998millibars to 964millibars over the UK in just over 24 hours– close to the required drop to qualify as an explosive cyclogenesis event.

Such ‘weather bombs’ have triggered notable storms including Storm Jorge and Storm Dennis which unleashed havoc at the start of last year.

Mr Dale said: “This storm is looking like an explosive cyclogenesis scenario.

“It scoots off quite quickly after Thursday, which is the good news, although it makes way for cold air to sweep across the country.

“We will be back into a situation of scattered snow, sleet and rain as we go through the final part of the month.”

Christoph is expected to whip up 70mph winds in rural and coastal regions with gales and severe gales forecast widely on Thursday.

Torrential rain in the meantime will bring a risk of flooding to parts of the country before temperatures plunge brining a widespread ice risk.

The Met Office has issued a raft of weather warnings through the week including an amber alert for rain later this week. 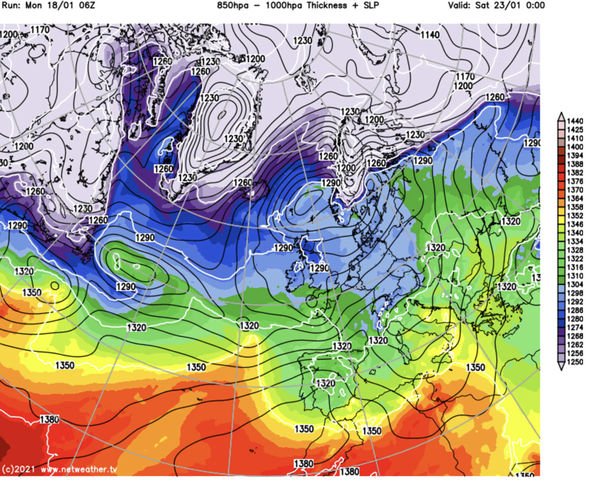 The Environment Agency has issued 61 flood alerts across eastern Britain and 11 ‘immediate action required’ flood warnings with heavy rain expected to be troublesome from Tuesday.

“Local river and surface water flooding is possible more widely in England and across Wales on Tuesday, Wednesday and Thursday.”

He said: “As the system moves away into the North Sea Wednesday night and Thursday morning there will be strong winds along the east coast for a time.

“Meanwhile, colder air coming southwards into the weather system brings the risk of further snow on the back edge of this system.

“Temperatures will gradually fall across the UK through the end of the week and into the weekend bringing a return to widespread overnight frosts.”

Netweather meteorologist Jo Farrow warned Britons to brace of a period of ‘atrocious’ weather ahead.

She said: “By the end of Wednesday into Thursday, the weather will be atrocious.

“A significant deepening low looks to produce gales, and snow for the north as it moves over the UK during Wednesday night and Thursday.

“The contrast north-south of cold to mild air will bring wild conditions across the UK by early Thursday.”