Kyiv: CCTV shows a blast next to pedestrian bridge

Footage has been released showing the dramatic moment a Ukrainian civilian narrowly escaped a Russian missile as it struck the pedestrian footbridge she was crossing in central Kyiv. In the video, the unnamed civilian can be seen walking along the glass-bottomed footbridge across the city centre when the Russian cruiser missile explodes on the ground beneath, creating a huge crater. The woman, who was nearing the middle point of the bridge, then turns back and flees for her life in a desperate panic. It is the latest evidence of nation-wide missile attacks that Ukraine is now claiming Russia have been planning since the start of October, prior to the explosion on the Kerch Strait bridge on October 8.

Though the bridge was not directly hit, the security camera footage shows it was quickly engulfed in shrapnel and flames as the wooded valley over which it runs caught alight.

The area is one of Kyiv’s most popular tourist destinations as it traverses through the middle of the city.

It is not believed that the woman was maimed by the attack and the video appears to show her running to safety.

As she fled, thousands of other Kyiv residents were running for shelter in nearby underground Metro stations, with dozens of bombs raining down on the city. 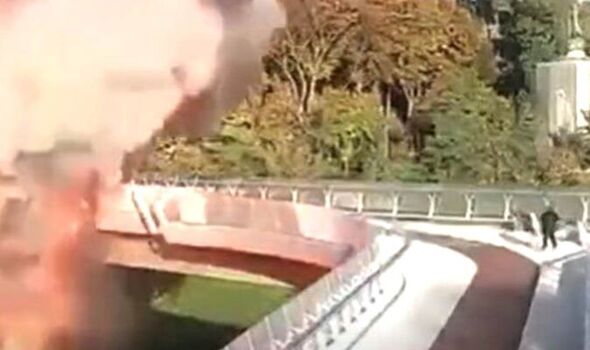 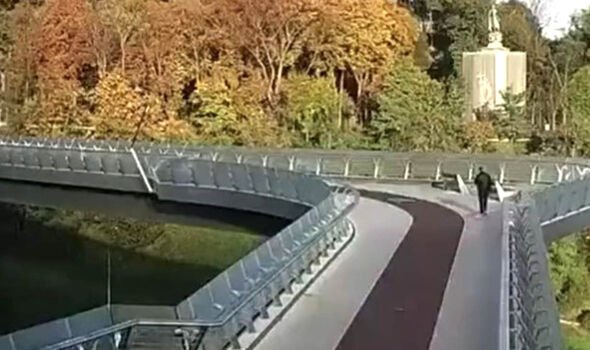 In a televised address, Putin said he had ordered “massive” long-range strikes against Ukrainian energy, command and communication targets, using missiles fired from air, sea and land, in response to what he described as terrorist attacks, including Saturday’s explosion at the Kerch Strait bridge.

He said: “The Kyiv regime, with its actions, has put itself on the same level as international terrorist organisations. With the most odious groups. To leave such acts without a response is simply impossible.”

But Ukrainian military intelligence have claimed that Russia has been planning these missile strikes on Ukrainian cities since the start of October, suggesting that the attacks would have happened regardless of the explosion to the only bridge connecting Russia to Crimea.

“According to the military intelligence of Ukraine, the Russian occupying forces received instructions from the Kremlin to prepare massive missile strikes on the civilian infrastructure of Ukraine on October 2 and 3,” the intelligence arm of the Ukrainian defence ministry said in a statement. 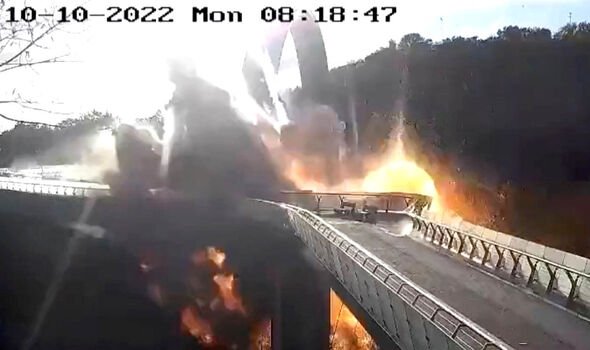 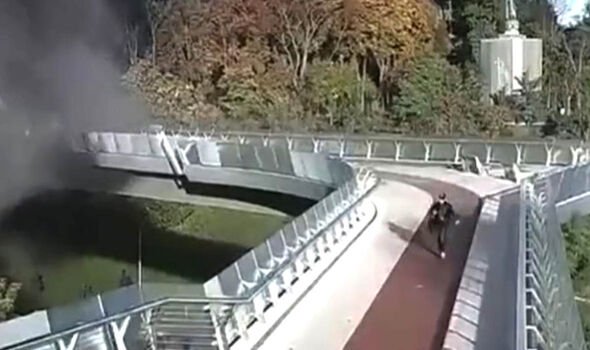 “The military units of the strategic and long-range aviation received orders to prepare for the task of massive missile attacks. The objects of critical civil infrastructure and the central areas of densely populated Ukrainian cities were identified as targets.”

Commentators on Russian television have increasingly been calling for massive retaliation against Ukraine, with the military leadership facing public criticism for the first time as Russian forces have been beaten back on the battlefield.

He wrote: “Now I am 100 percent satisfied with how the special military operation is being conducted.

“We warned you Zelensky, that Russia hasn’t even got started yet, so stop complaining … and run! Run away without looking back to the West.” 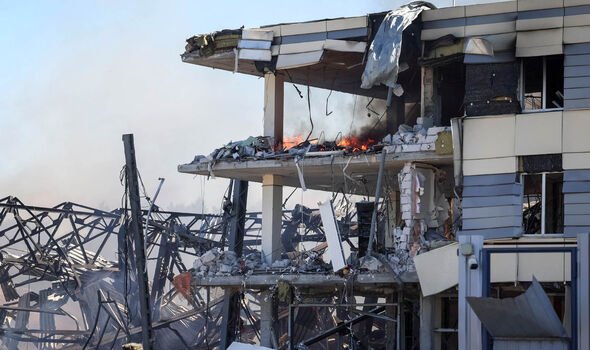 Foreign Minister Dmytro Kuleba tweeted: “Putin’s only tactic is terror on peaceful Ukrainian cities, but he will not break Ukraine down.

“This is also his response to all appeasers who want to talk with him about peace: Putin is a terrorist who talks with missiles.”

The first missiles were reported at around 6.30am GMT, after which they continually fell for the next few hours, first in Kyiv, then in major cities across Ukraine including Lviv in the west and Kharkiv in the east. At the time of writing, the death toll stands at 10, excluding the 12 killed in the attacks on the southern city of Zaporizhzhia on Sunday morning, with 60 wounded.