The road and rail bridges across the dam have been targeted by Ukrainian artillery in a series of strikes, as Kyiv’s army attempts to cut off a unit of Russian soldiers located north of Kherson, between the Ingulets and Dnipro rivers.

The dam and its bridges are a key strategic target, whose capture would also allow Ukraine to take control of the Crimean water flow, establish an ability to cross the river below Dnipro, as well as drive Russians away from supply lines at Kryvyi Rhi, according to the analyst Michael Bond.

In its daily bulletin on the war, the Institute for the Study of War (ISW) wrote: “Social media footage of explosions in Nova Kakhovka (55km east of Kherson City) supports satellite imagery from September 2 depicting that the Nova Khakovka dam bridge has partially collapsed due to Ukrainian strikes.

“The satellite imagery shows a roughly 20m-by-9m segment of the bridge has fallen into the river, which has likely rendered this section of the dam bridge inoperable (see below image).”

The rail bridge remains standing, but is severely damaged, according to reports. 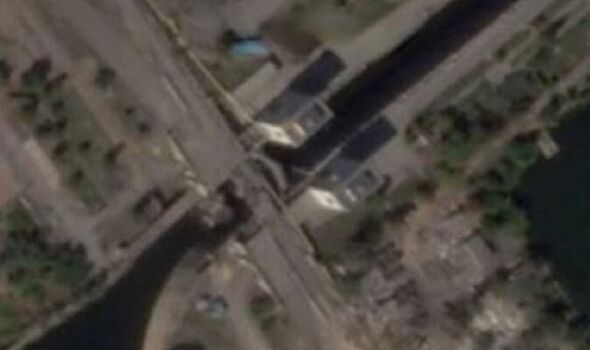 VOLODYMYR ZELENSKY has praised outgoing Prime Minister Boris Johnson for his constant support to Ukraine as the country continues to fight with Russia, a news report has claimed.

Mr Johnson has been leading the support in Ukraine in its fight against Russia since February 24. The UK also introduced one of the largest and most severe packages of economic sanctions against Russia.

Measures cover over £18 billion worth of products that were traded with Russia in 2021, as well as over 1,000 individuals and over 100 entities in key sectors such as defence.