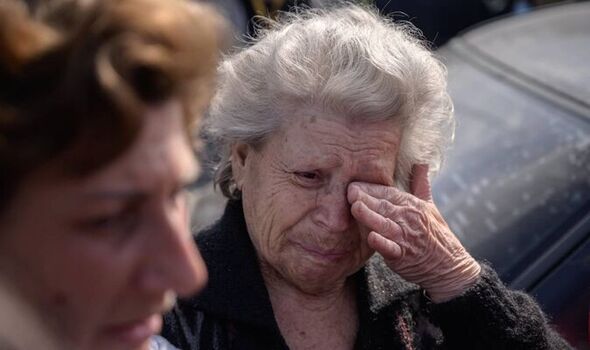 Senior sources added that Russian artillery had resumed shortly after about 100 people were safely moved from the plant.

The steelworks is where the city’s last defenders are holed up, with more than 500 soldiers and around 1,000 civilians surviving in the vast industrial area’s underground network.

Hopes had risen of a swift end to the two-month siege when the first batch of evacuees were ushered to safety by United Nations and Red Cross workers.

But yesterday Pedro Andyushchenko, an advisor to Mariupol’s mayor, told Ukrainian television: “As soon as the buses left Azovstal with the evacuees, new shelling began immediately.”

His account was backed by Denys Shlega, a national guard commander at the complex, who said: “Several dozen small children are still in the bunkers underneath the plant.”

Sviatoslav Palamar, deputy commander of the Azov regiment defending the steelworks, said that after months of bombardment, the living conditions were appalling.

He said the air stank of rotting bodies, drinking water was running short and among the rubble were mines, rockets, artillery shells and unexploded cluster ordnance.

Mr Gaidai said that in some areas, the bombardment was so intense, salvage workers could not recover the bodies.

“I don’t even want to speak about what’s happening with the people living in Popasna, Rubizhne and Novotoshkivske right now.

“These cities simply don’t exist anymore. The Russians have completely destroyed them.”

The UN human rights office said the war’s civilian death toll had reached 3,153 – up 254 from Friday. It stressed many more deaths may not have been reported.

The Raptor boats were being used to evacuate Russian military personnel from notorious Snake Island, and replace them with new personnel, it was reported.

The attack came as Ukraine claimed to have detained Russian GRU military intelligence operatives in the Donbas.

A picture showed the military reconnaissance officers blindfolded and half naked after being held, said Ukrainian sources.

Meanwhile, two British “mercenaries” detained after fighting in Ukraine have been told they could face the death penalty.

The prosecutor of the so-called Donetsk People’s Republic was seen smirking as he informed British fighters Shaun Pinner, 48, and Aiden Aslin, 28, of charges against them.

The DPR is a state recognised only by Russia. Under International law it is part of Ukraine.

Prosecutor Andrei Spivak said: “They are charged with a number of crimes against civilians of the Donetsk People’s Republic.

“The maximum punishment for these crimes is the death penalty.”

Aslin said to camera: “I understand fully what I am accused of and I agree up to the part about murdering civilians – I don’t agree with that.”

Pinner appeared drained as he acknowledged the charges.

Russia has suspended the use of the death penalty and it has not been used since 1996, although there are moves to reintroduce it.