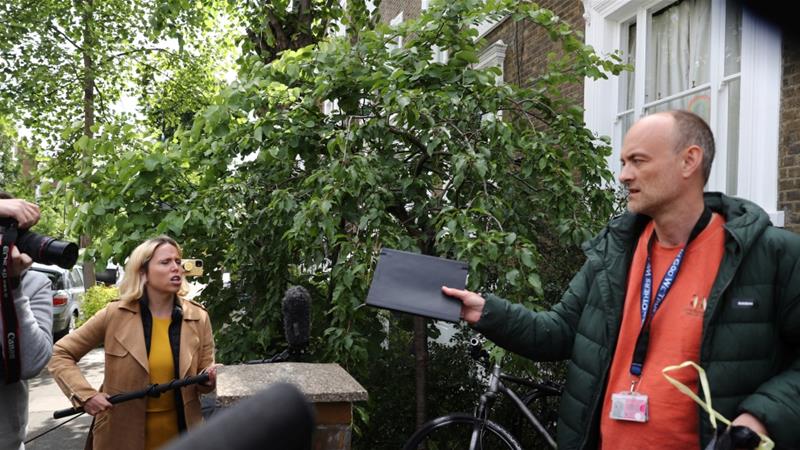 Johnson addressed a government news conference on Sunday amid growing pressure to remove Cummings, who has defended his decision to drive 250 miles (400 kilometres) from London to his parents’ home in Durham, in northeast England, with his wife and son as he was coming down with COVID-19 symptoms at the end of March.

“I believe that in every respect he has acted responsibly and legally,” Johnson told a news conference.

“I think that what they did was totally understandable,” he added. “I think any father, any parent would frankly understand what he did and I certainly do.”

Britain’s lockdown, which began on March 23, stipulated that people should remain at their primary residence, leaving only for essential local errands and exercise. Anyone with coronavirus symptoms was told to completely isolate themselves.

Some Conservative MPs on Sunday joined opposition calls for Cummings to resign.

“Dominic Cummings has a track record of believing that the rules don’t apply to him and treating the scrutiny that should come to anyone in a position of authority with contempt,” tweeted Conservative politician Damian Collins. “The government would be better without him.”

Tory politician Steve Baker on Sunday said Cummings “must go before he does any more harm to the UK, the government, the prime minister, our institutions or the Conservative Party,”  in remarks featured on the UK website The Critic.

The government has defended Cummings, saying he travelled to be near extended family because his wife was showing COVID-19 symptoms, he correctly thought he was also infected and he wanted to ensure that his four-year-old son was looked after.

Johnson’s government is already facing criticism for its response to a pandemic that has hit Britain harder than any other European country.

Britain’s official coronavirus death toll stands at 36,757, the second-highest confirmed total in the world after the United States.

Statistics that include suspected as well as confirmed virus cases put the toll well over 40,000.

The UK is gradually easing its lockdown, allowing more outdoor recreation and letting some shops and businesses reopen.

The government hopes primary schools can start reopening in June, though many parents and teachers worry that it is not yet safe to do so.

Cummings is one of several senior UK officials to be accused of flouting the lockdown rules.

Epidemiologist Neil Ferguson stepped down as government scientific adviser earlier this month after a newspaper disclosed that his girlfriend had crossed London to stay with him during the lockdown.

In April, Catherine Calderwood resigned as Scotland’s chief medical officer after twice travelling from Edinburgh to her second home.