Donald Trump issued new guidelines on Monday to help fight the coronavirus, including a recommendation that people avoid social gatherings of more than 10 people, discretionary travel, and going to bars, restaurants and food courts. President Trump said the new guidelines from his coronavirus task force applied for 15 days and were meant to slow the spread of the virus.

President Trump said: “With several weeks of focused action we can turn the corner and turn it really, a lot of progress has been made.

“I’m also pleased to report today that a vaccine candidate has begun the phase one clinical trial.

“This is one of the fastest vaccine developments launches in history.

“Not even close but also racing to develop anti-viral therapies. 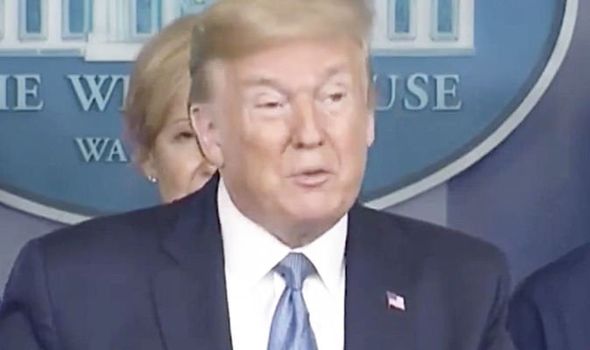 “We’ve had some promising results, early results but promising to reduce the duration and severity of the symptoms.

“I have to say that our Government is prepared to do whatever it takes.”

Trump said a nationwide curfew was not under consideration at this point.

Trump said the US economy could be heading into a recession.

He said the administration has talked regularly about domestic travel restrictions but hopes not to have to put such things in place.

The president has faced criticism for his handling of the pandemic after earlier playing down its seriousness in the early days of the virus’ spread.