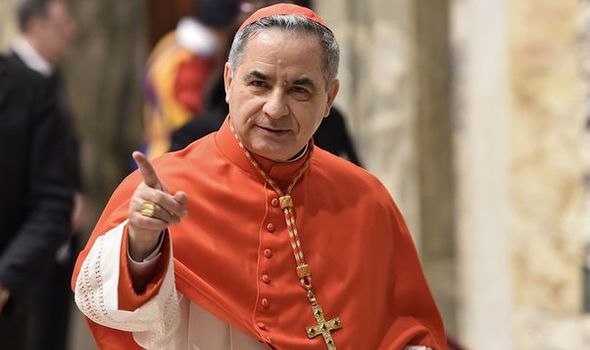 Cardinal Angelo Becciu, 73, is among 10 people on trial for syphoning off donations to Papal charities.

Other defendants also accused of crimes including extortion, embezzlement, money-laundering and abuse of office include a Vatican accountant and a glamorous female spy.

They are said to have used the church’s funds “like a sort of ATM” which sent shock waves through the holy city.

Among allegations is a claim that they lost a fortune on a property deal to convert a former Harrods warehouse in Chelsea, west London.

Prosecutors also claim Becciu, who was in charge of donations to the Papal fund, channelled money into businesses run by his brothers in Sardinia.

Becciu, the most senior cleric in modern times to face trial for financial offences, denies wrongdoing. He was sacked by Pope Francis last September.

Fabrizio Tirabassi, a Vatican accountant, is accused of fraud, extortion and embezzlement. He was found to have £1.3million in a Swiss bank account. All defendants deny wrongdoing but if found guilty face substantial jail terms.

Last week, the Vatican published details of its holdings, including more than 4,000 properties in Italy and 1,120 in other European cities.

The trial, likely to be adjourned until October, is expected to last for months.