Hundreds of people on the island of Vulcano, north of Sicily, are being told they cannot stay in their homes overnight due to potentially lethal gases in the area amid a build-up of volcanic activity.

Around 300 people are having to find alternative accommodation where they can sleep from 11pm to 6am, starting on Monday, say authorities.

And the island, which gave volcanoes their name, will be off limits for tourists for a month.

Officials have declared a state of crisis and a regional emergency for Vulcano, and the alert level has been raised from “yellow” to “orange”.

This is in order to bring in a range of measures aimed at protecting the population in case of volcanic explosions or a further increase in gas emissions. 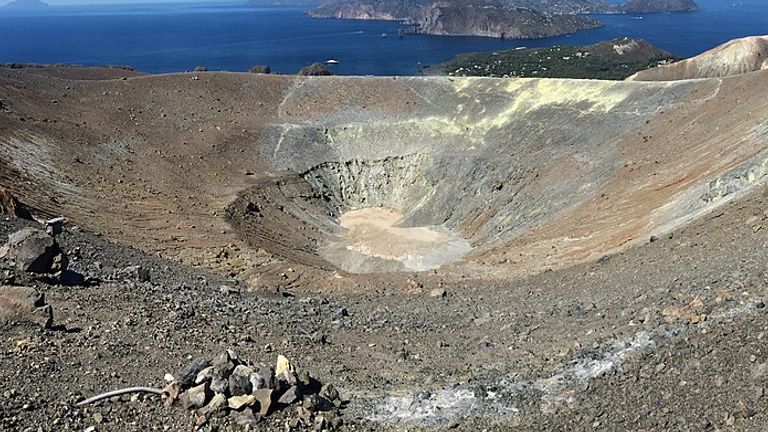 Experts say the build-up of gases reduces the amount of oxygen in the air and creates breathing difficulties that can have lethal effects.

Very high gas concentrations have been detected in parts of Porto di Levante, the most popular part of the island, where its natural hot mud pools are located which attract many visitors.

The local mayor is concerned that people could suffer the consequences of high levels of carbon dioxide (CO2) while sleeping during the night.

The word “volcano” derives from the name of the island, which in turn comes from Vulcan, the Roman god of fire.

Vulcano is the southernmost of the Eolian Islands. It has an active volcano (also called the Fossa) that has had frequent eruptions documented since ancient times.

Daily CO2 levels emitted into the atmosphere from the island are normally about 80 tonnes but now they have risen to about 480 tonnes.

Many residents are choosing to stay with friends or family or to go to their second homes in other areas of the island.

Authorities say they will make a contribution towards the cost of people staying in hotels.

CO2 is odourless and in high concentrations it can lead to asphyxiation.

It is much more dangerous than sulphur dioxide (SO2) or other acid gases (such as hydrogen chloride), which can be more easily detected due to the foul smell and the discomfort they can cause to the upper respiratory tract or to the eyes.

Last month, Porto Levante resident Stefania Lombardo told Italian media: “I suddenly realised that my 10 cats were lying on the ground, as if they were stunned – I also didn’t feel well, I was breathing hard.

“I was told it was just a panic attack, then the doctors confirmed that the cause for the sickness was the exhalation of gases from the crater.”

The last volcanic eruption on the island took place from 1888 to 1890.