We could scarcely believe what we were seeing from a bridge overlooking the road which wraps itself around Durban’s port area.

It was full of pick-up trucks and cars with raiders and thieves weaving in between, carrying sacks of rice and crates of sardines or pushing wheelbarrows piled high with flour.

One man had stolen an orange fork-lift truck and we watched him try to steer it through the crowd.

Warehouses and distribution centres close to the port were in the process of being ransacked and we watched from the edge of the bridge as their contents were calmly carted off.

The young and the old were taking advantage and the police and members of South Africa’s defence forces were nowhere to be seen.

The scene was replicated on the Riverhorse Industrial Estate some 15km (nine miles) to the north as residents carried off whatever they could haul down the train tracks alongside the estate.

“Silambile,” or “we are hungry,” said one man in isiZulu when I asked him why he was looting.

“No food, no nothing, no work,” said another who was carrying a brand new bicycle above his head. 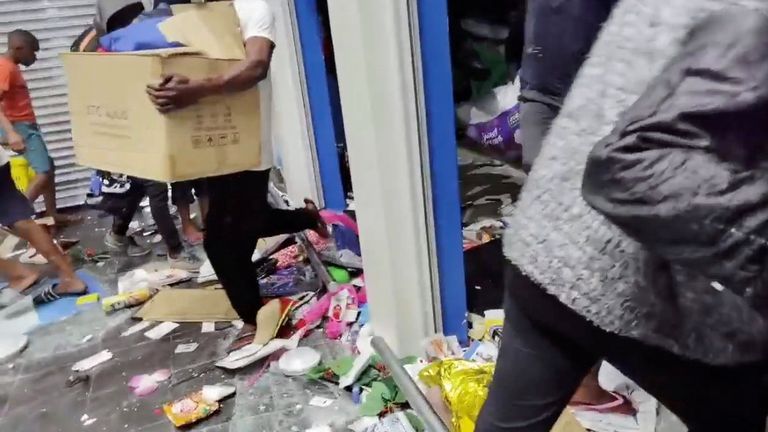 The trouble was triggered by the arrest of former president Jacob Zuma last week with a series of protests accumulating into general lawlessness in the provinces of KwaZuluNatal and Guateng.

The looting and the rioting appear to be largely opportunistic but they have been fuelled by frustration in a country where millions are struggling to get by.

The unemployment rate is pushing towards 40% and the coronavirus pandemic has killed off the economic growth South Africa desperately needs.

But the violence will make things worse.

We watched police armed with rubber bullets and tear gas try to clear the Riverhorse Estate but we did not see them make any arrests. The looters fled through clouds of smoke although many had to dump their plunder as they made their escape.

However, there were some who never leave this devastated spot. We counted three dead bodies on the grass-covered verge of the estate.

A police officer in a mask, who wished to remain anonymous, said the scene reminded him of foreign lands.

“The ‘Highway of Death’, the Gulf War, that’s what it looks like down there,” he said.

“If you carry on, burnt out cars, wrecked cars, they’ve looted everything, factories are burning, warehouses are burning, they’re coming in their thousands to come and loot.” Roadblocks have been erected to intercept the looters but they will not stop the disorder. The authorities lack basic resources, while millions of people cannot meet their basic needs.

As we made our way back to our hotel we witnessed a city readying for its own defence as many people waited for the deployment of significant numbers of government troops.

Smart-looking residents armed with golf clubs and hockey sticks have erected homemade barricades to stop cars and people from entering their neighbourhoods.

It is disorientating sight in a deeply troubled South African city.