NetWeather has predicted a high pressure system over mainland Europe to bring more settled weather and  much warmer air over the next few days. The hottest day of the year could be recorded several times over as the mercury climbs towards 34 degrees in the south of the UK by Thursday. However, the record for the hottest June day ever looks set to remain in tact, as temperatures will not quite reach the 35.6c seen in 1976.

Met Office forecaster Luke Miall said: “We’ve got high pressure to the South East of the UK over the next few days which is going to be drawing our air up from the continent”, and the warmer climates of France and Spain.

Tuesday’s top temperature is expected to be around 29c in the South Wast of England, with other areas quite widely getting into the mid 20s, the forecaster said.

The hottest day of the year so far was 28.9 degrees reached last month.

Mr Miall explained: “It’s likely tomorrow will beat that in the South, do it again on Wednesday and then again on Thursday. 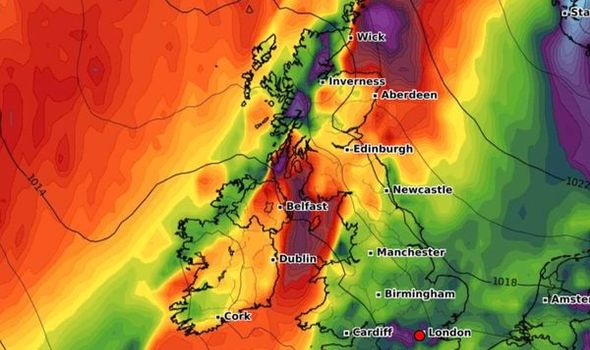 “Thursday will probably be the hottest day in the region of 33 or 34 degrees”, but he added “that’s not quite the June record from 1976”.

“Although it’s fairly uncommon to get 34 in June at the moment, it doesn’t look like we’re going to break any of the records.”

Things will start to cool off for the weekend, and the meteorologist explained: “By Saturday most places will be seeing the fresher air coming across for the weekend, so although it might still be humid at times I think generally temperatures will be falling below heatwave.”

With the dry and sunny weather expected and the Government’s Covid-19 alert level lowered to three, emergency services across the country are urging people to continue to respect the two-metre social-distancing restriction.

However, Jo Farrow at Net Weather warned of thunderstorms by Friday.

She said: “Friday looks more uncertain. This is when the risk of thunderstorms is higher, still the potential for temperatures to reach over 30 Celsius.

“These thunderstorms would bring the risk of torrential rain, lightning, hail and gusty winds.

“They swing eastwards during the day and spread northwards by Friday evening. There is a lot of uncertainty for any detail, but the ingredients are there.”

The National Fire Chiefs Council (NFCC) has also warned against starting campfires which can easily get out of control, and to call 999 immediately if you spot a fire.

The NFCC said: “The weather is forecast to improve and, although we’ve had our fair share of rain recently, the risk of wildfires remains.

“These fires are often preventable, so if you are enjoying the countryside please be wildfire-aware and look out for our advice.”

People with elderly relatives should also make sure they are finding a way to keep cool during the lockdown, Age UK has warned.

“Lockdown and shielding bring added complications as it can be harder to spot someone who may be getting into difficulties and in need of extra help,” she said.

“There are so many different ways to get in touch during the pandemic, whether it’s a note through the door, picking up the phone, or, for those online, messaging via social media or chatting by video message like Face Time or Skype.

“The important thing is keeping in touch and to make sure older people are okay.”